And so Pittsburgh fans will be spared the sight of Sidney Crosby sporting an old Kansas City Scouts jersey and a Sprint Center hat, loading the Stanley Cup and the rest of his Penguins teammates into a convertible and after circling crumbling Mellon Arena once, making a beeline for the state line.

And for that, hockey fans everywhere can give thanks. 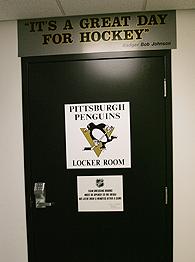 They can give thanks that a good hockey town won't lose its team over a squabble that has always been more politics than pucks.

They can give thanks that a team that might have a bushel of Stanley Cup rings in its future won't be awarded to another city like some 50-50 raffle prize at the local rink.

They can give thanks that the league, after enduring a number of public relations hits in recent days, got this one right.

With Chris Simon's samurai attack on Ryan Hollweg still getting significant face time on networks (sports and otherwise) across North America, these are headlines that might help put some distance between the NHL and that grisly affair.

With the playoffs set to start four weeks from Wednesday and a bounty of terrific storylines waiting to be played out -- not the least of which is the possibility of a long playoff run by these Penguins -- this bit of good news might well be a launching pad to better times for the league.

In fact, this has been a pretty good week for NHL bigwigs, all things considered.

NHL punishment czar Colin Campbell got it right in a big way Sunday by suspending Simon for the rest of the regular season and the playoffs (or a minimum of 25 games, depending on how the Isles' season plays out).

Then, confirmation came Tuesday morning that the Penguins reached a deal with local authorities to keep the team in Steeltown, signing what was reported by a number of Pittsburgh media outlets to be a 30-year lease. The new arena reportedly will be ready for the 2009-10 season.

The news will be a welcome relief to anxious Penguins fans who have rallied in impressive numbers around their young team. Led by NHL scoring leader Crosby and a bevy of rising young stars, the Penguins look like a lock to make the playoffs for the first time since 2001 and have helped revive the moribund franchise far more quickly than any had imagined.

But with negotiations on a new arena faltering and a brand new arena waiting for some lucky team in Kansas City, the very real prospect the team would be a repeat of the Quebec Nordiques suddenly had added a nightmarish tinge to the team's dream season.

The Nordiques, of course, left Quebec after the 1995 season, and, the following spring, hoisted the first of two Stanley Cups won in Denver to become one of the NHL's most successful franchises. 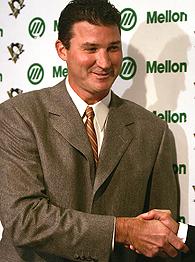 Now, those relocation fears can be put to rest -- or at least transferred to another location like Nashville or Long Island.

It's still unclear what role NHL commissioner Gary Bettman and/or his right-hand man deputy commissioner Bill Daly had in the ultimate resolution of this deal, but both were on hand when the parties met last Thursday in Philadelphia.

Before that, things looked pretty much off the rails with owner Mario Lemieux and his partners declaring an impasse and jetting off to Las Vegas amid not-so-subtle threats that moving vans had been put on notice.

But as much as Lemieux would have been aware of the league's great interest in keeping the team in Pittsburgh, Bettman would have also made it clear to local authorities that their deal would have to be pretty sweet if the NHL was going to risk going to war with one of its greatest players and a Hall of Famer to boot.

The fact the deal was resurrected in such a short period of time suggests Bettman played a significant role in bringing the two sides together.

If he did, kudos to him for helping make things right for a town, its team and the league.

If he didn't, what the heck.

After watching Simon's attempted decapitation of Hollweg playing in a seemingly endless tape loop these last five nights, even the commissioner deserves a break.