The problem is that the post is still occupied, at least technically, by Mike Sullivan. Is it any wonder that players and agents view Boston as a destination of last resort because it has a reputation as a place with little regard for its people?

We accept that new GM Peter Chiarelli wants to keep his options open vis a vis his head coach. But if you don't believe that Sullivan is your man, then show him the consideration he's due and cut him loose so he can pursue other options. What kind of respect does Sullivan have in the dressing room if he returns knowing he wasn't the GM's first choice? 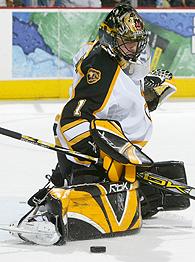 It's a situation that's only slightly better than on Long Island, where the New York Islanders didn't bother to tell interim coach Brad Shaw they had hired Ted Nolan to coach the Islanders. Instead, Shaw heard the news from a reporter. It's called doing the right thing, and in both cases, these teams don't quite get it.

Caught in the nets

San Jose Sharks GM Doug Wilson was a busy man, fielding calls about two of his netminders -- Evgeni Nabokov, a former rookie of the year, and Vesa Toskala, who stole the starting job from Nabokov last summer.

Among the suitors for Nabokov are the Los Angeles Kings, who reportedly offered Alexander Frolov, Dustin Brown and Mathieu Garon. But Wilson declined, in part because the Kings are a division opponent and because new Kings GM Dean Lombardi was the man who drafted Nabokov. No sense tempting fate.

The other rumor circulating had the Senators offering Martin Havlat, due to become an unrestricted free agent next summer, for Toskala. Neither deal materialized.

The great goaltending rodeo did not materialize Saturday, in spite of the rumors. One team that addressed its needs, however, was the Toronto Maple Leafs. They traded one of their top goaltending prospects, Tuukka Rask, the goaltender of the tournament at last year's World Juniors, to Boston for former rookie of the year Andrew Raycroft. The Leafs had been rumored to be interested in Nabokov but balked at the asking price.

The deal illustrates the minefield teams face in trying to fill goaltending needs given the question marks that surround virtually every available netminder.

Raycroft, for instance, was miserable last season, turning in a 3.71 goals-against average and .879 save percentage while losing the starter's job in Beantown. Raycroft's qualifying offer would see him earn $1.35 million, while Nabokov, also coming off a subpar season, is due $5 million.

What is the bigger gamble?

If Raycroft can regain his form, Leafs GM John Ferguson will have considerably more cap room to pursue a frontline winger to play with Mats Sundin or a second pivot to increase the team's balance, such as Patrik Elias or Marc Savard.

If, however, Raycroft goes sideways again, the Leafs will have little chance of making the playoffs.

That said, the Kings did make a move to free up some cap room, sending arguably their most complete offensive player, Pavol Demitra, to Minnesota for the 17th pick in the draft and promising prospect Patrick O'Sullivan. The move suggests the Kings will be scouring the free-agent market for offensive help, not to mention the goaltender they did not acquire Saturday.

As for the Wild, GM Doug Risebrough added a proven goal scorer in Demitra, who was plus-21 on a defensively leaky Kings team last season. Demitra has been plagued by injuries (he played just 58 games last year but still managed 62 points), but he should fit nicely into coach Jacques Lemaire's straightjacket offense. Risebrough said Demitra reminds him of the way Lemaire played. The subtext to the acquisition is that the arrival of Demitra may help spur restricted free agent and fellow Slovak Marian Gaborik come to terms with the Wild.

Kudos to Atlanta GM Don Waddell for unloading the mistake-prone Jaroslav Modry and Patrik Stefan to Dallas for Niko Kapanen and a seventh-round pick.

The move is, in many ways, a symbolic one as Stefan was the last of the original Thrashers still with the organization. He holds the distinction of being perhaps the most ordinary first overall pick of all time. Yes, we know the 1999 draft was among the thinnest of all time. Still, Stefan was at all times underwhelming, and for a team that has not yet qualified for a single postseason game, his departure signifies the last ties with the "expansion" label.

We love to anoint winners and losers on draft day. But it's hard not to see the Jordan Leopold-for-Alex Tanguay deal as being anything but a win-win situation. The Calgary Flames are still one of the most difficult teams to play against, but they were revealed in their first-round playoff loss to Anaheim as not having nearly enough offensive oomph.

Tanguay, a skilled player who has been around the periphery of the Canadian Olympic team the last two Olympics, should help in that regard. Meanwhile, the Avalanche are continuing to try to recover from the loss of Adam Foote and the lack of depth along the blue line. Leopold, a U.S. Olympian, is close friends with John-Michael Liles, Colorado's best young defenseman. The move also gives the Avs a little more cap room as they try to sign veteran defenseman Rob Blake, who is set to become an unrestricted free agent.

It ain't easy being the commish

Ah, what a wonderful draft tradition, the incessant booing of NHL commissioner Gary Bettman. Everyone gets up in arms over the booing of the national anthems, but does it show any less class to boo the commissioner of a major sports league who is introducing what is always a great event in the host city?

You can take issue with how St. Louis Blues GM Larry Pleau has managed the Blues over the past decade or so. But the longtime player and executive has done an admirable job under the most trying of circumstances. Pleau was on stage with new Blues owner Dave Checketts to help welcome No. 1 overall pick Erik Johnson into the Blues family, not knowing whether he will have a job a few weeks from now.

"It's like buying a house. You go out and buy a house that you like and you look at all the things you want to do, you want to put a rug in here, but you can't get in here to do it, so we'll find out what they're going to do once the closing takes place. I think they're in that process," Pleau said. "Our approach is going to be long-term. We're down here now, let's do it right. This is a huge step for us here."

The buzz is that Pleau will remain at least through this season until John Davidson, who is expected to be named team president in the coming days, gets a handle on exactly where the franchise is. Likewise, it's expected coach Mike Kitchen will get a chance to prove his value to the franchise.

"He's the same as me, not sure what's going to happen," Pleau said. "He and I sat down last January, and I said, 'We've been listening to a lot of stuff ... I'm looking at this like you and I are going to be here.' And that's the way I've approached running the organization."

Just another indication that what looks good on paper might not make sense in the flesh is the fact that the Pittsburgh Penguins used the second overall pick to draft center Jordan Staal. This despite persistent rumors the team would trade the pick to Carolina for blue-chip defensive prospect Jack Johnson, the No. 3 pick a year ago. Johnson is good friends with Sidney Crosby and Staal is, of course, the younger brother of emerging superstar Eric Staal. Nice idea.

Great idea for Washington to include rookie of the year Alexander Ovechkin in the proceedings as he announced the Caps' first (Swedish forward Nicklas Backstrom) and second (Semen Varlamov) picks of the day.

Although the Caps were prepared to send Ovechkin home after the annual awards ceremony Thursday, Ovechkin said he wanted to stay and meet the new draftees. Throughout the day, Ovechkin could be seen hanging out with the new players and signing autographs and providing interviews to the media.

So much time is spent wondering how best to market the new NHL -- here was a living example of how it should be done.

Good job by Nashville GM David Poile for drafting one of his own, Blake Geoffrion, grandson of the late Hall of Famer Bernie "Boom Boom" Geoffrion, who was raised in Tennessee. With the 56th pick, the Predators took the 6-foot-1, 190-pounder, who played with the U.S. under-18 team last season.

So, what didn't happen?

Well, of the many things that didn't happen, the Tampa Bay Lightning did not make a move to fill their goaltending vacancy. Rumors persist that GM Jay Feaster is interested in Columbus Blue Jackets netminder Marc Denis. But Denis has faced a lifetime worth of rubber in six seasons in Columbus, and one wonders if he is worth a frontline player like Ruslan Fedotenko or Fredrik Modin, two names being bandied about as potential trade bait.