COLUMBUS, Ohio -- Is there a moment when mourning and loss and tragedy are erased, somehow blotted out by the arrival of the momentous?

No. That notion lives in the domain of Hollywood movies and works of fiction.

But there was something awfully close to that when the Nashville Predators announced they had selected defenseman Jonathon Blum that with the 23rd pick in the 2007 NHL entry draft and made him the first California born-and-raised hockey player to be selected in the first round. 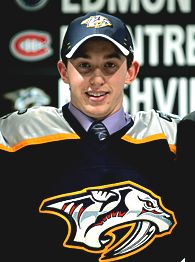 In that moment, as the 18-year-old Blum turned and embraced father John and mother Dana and received warm embraces from the 15 members of his family and close friends who made the trip from the West Coast, all of those emotions and memories coincided.

And in that long walk from the stands to the podium that every hockey-playing kid dreams of making, when he slid the Predators jersey over his shoulders for the first time and parked a team ball cap on his head, there was a moment given only to the memory of a twin sister, Ashley, who perished in a house fire three years ago, and a thought for his mother, who was diagnosed with cancer two years ago and wasn't expected to live and see this moment.

"I think of my mom and my sister," Blum said. "I wish my sister would have been up there in the crowd. It would have really meant a lot. But she is in our hearts and we think about her and that's something that my family needs. We've been through a lot. It's a lot of pressure off my family and we can just go and enjoy it tonight and for the next couple of months."

There is a tendency to describe people who have endured personal tragedy as having "overcome" their losses. No one overcomes the loss of a sister. No one overcomes the near-death experience of a mother. In the best-case scenarios, people absorb these losses and traumas and somehow use them as fuel to move forward to achieve more, to be better.

"This is just so amazing, this big, giant step for his dream has almost come true," his mother said in an interview before the draft. "This is only part of it, but it's a big part of it. We're just so proud of him. It's a little bit of a ray of sunlight after we've had some tragedies. He really deserves this."

Blum's childhood in many ways mirrors the childhood of thousands of young hockey players, apart from the fact that he got up every morning and went surfing instead of heading to the local rink or backyard frozen pond. Sometimes, the family would take their motor home down to the beach and the kids would surf all day long with only periodic breaks for food.

His hockey memories begin with playing with his older brother (he has two older half-siblings, a brother and a sister) and twin sister Ashley on rollerblades on their quiet lot in Rancho Santa Margarita, about 20 minutes south of the Honda Center, home of the Anaheim Ducks.

That evolved into roller hockey, and, finally, after attending an ice skating birthday party, to ice hockey.

"I only fell about four times. I just told my dad, 'I liked that,'" Blum said.

His mother was amazed.

"He was like a fish in the water. I couldn't believe it," Dana said.

Ultimately, Blum found himself playing on a local minor hockey team, The California Wave, led by Jeff Turcotte, younger brother of former NHLer Alfie. The team flew thousands of miles every season to play in top-notch minor hockey tournaments in Canada and the northeastern United States. In short order, hockey became not just Jonathon's life, but life for the family, as well.

"All his best friends were from hockey," recalled Dana, a California native who never dreamed she would grow up to be a hockey mom.

When something like that happens, you're in shock. But you can't give up on your dreams. I realized my sister wouldn't want that. You've got to move on with your life even though you're still raw from what happened.

"Never," she said with a laugh.

It was at one of these tournaments that Blum drew the attention of junior scouts. Even then, his California background saw him drop down to the seventh round of the junior draft.

"I would say, growing up [in California], the odds are against you," Blum said. But, in some ways, knowing that people would pre-judge him because he came from California served as a motivating factor.

"When you get out there and play, they know who you are," he said. "When I'm on the ice, it doesn't matter where I'm from. I just work hard and play."

Blum attended his first junior camp in Vancouver when he was 15, just a few months after the Ashley's death, the result of a house fire started by a gas leak on April 2, 2004 while the rest of the family had gone out for dinner.

As training camp approached, the family had to decide if Jonathon would continue his hockey career, which would mean traveling to Vancouver or not.

"It was a big decision," Blum recalled. "My family said I should do it because it was always my dream. [Ashley] always supported me in everything I did and she would totally want me to do that."

Indeed, the twins had made a pact that if Jonathon ever made it as a pro hockey player, Ashley would be his personal chef since she loved to cook and he did not. Even though Jonathon attended camp, Dana admitted she was secretly pleased when he returned after training camp.

"It was so close to losing Ashley," she said.

"It was a tough decision, but a good one," Blum added. "When something like that happens, you're in shock. But you can't give up on your dreams. I realized my sister wouldn't want that. You've got to move on with your life even though you're still raw from what happened."

It was, in many ways, a blessing when Jonathon made the Giants as a 16-year-old. Dana had been diagnosed as having a form of juvenile cancer that occurs rarely in adults. One day after her usual 1½-mile walk with the family dogs, she coughed up blood. A trip to the local hospital revealed the cancer was in stage four and she was told that she had perhaps a matter of months to live.

"We refused to accept that," John Blum said.

The family combined to do research on cancer treatment and doctors at Cedars-Sinai Medical Center in Los Angeles ultimately helped Dana beat the disease. The road to recovery has been potted with setbacks and disappointment.

At various times, Dana's lung collapsed and she required heart surgery. She endured nine straight days of chemotherapy and then discovered a fungus had taken up home inside her body that had to be scraped out. The drugs used to treat the fungus left her with a serious tremor.

During his rookie season in Vancouver, Blum would call home and his father would often try and spare him the details of his mother's suffering, especially during periods of chemotherapy. If she was having a down day, he would tell his son that Dana was resting. When she was having a good day, it was all about concentrating on the positive.

"I'm still finding out stuff she went through," Jonathon said. "They did a good job of not letting me worry too much." 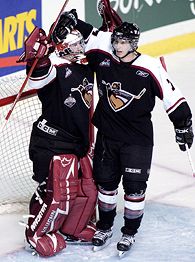 One of the underlying themes of any draft weekend is the notion that this is recognition not of any one player's successes, but of the contributions and sacrifices from a whole range of people – teammates, coaches, parents, extended families. If the old idea that it takes a village to raise a child is accurate, it is likewise for a player like Blum, who faced incredible odds to arrive on the podium here in Columbus.

Every year, Vancouver Giants coach Don Hay, a former NHL coach, has his junior players stand up and talk about their background and families. And so, it was the kid from California who stood up and told his news about his star-crossed family.

"It's tough to talk about it. You get choked up and you get teary-eyed," said Blum, who has found it an important emotional release to talk about his sister and his mother. "You need to talk about it at times. It helps to get the emotion out of you."

In turn, his teammates and coaching staff became a tremendous source of support. "They're like your family, too," Blum said.

Sometimes during that first season away from home while his mother spent long periods at the hospital and was at other times bedridden at home, Blum would simply call home and listen silently to his parents' voices.

"It was like a police interrogation to get him to talk," his father recalls. "It was like he just wanted to hear mom and dad's voices."

But gradually, thanks to the closeness of the team in Vancouver and his own emerging maturity, those calls became less frequent.

"He's been through a lot of adversity growing up. I think it shows the kind of character Jonathon possesses," Hay said in an interview last week. "It's just a testament to his internal strength and his courage."

When Blum came home at Christmas that first year, he seemed a different person, less a boy and more a man.

"The way he carried himself changed," said his father, who operates an electrical contracting company with 10 employees. "The way he spoke just changed."

As a hockey player, Blum also evolved quickly. He has played in two Memorial Cups in the two years he's been in Vancouver, helping the Giants to a championship this spring. He hopes to make the U.S. World Junior Championship team next year, when he will almost certainly return for a third year of junior hockey.

Hay lauds Blum's offensive creativity and ability to move the puck quickly and safely out of danger.

Upstairs at Nationwide Arena in the Predators' private suite, Blum's entourage met with GM David Poile and the team's coaching and scouting staffs. John Blum admitted there was a jumble of emotions as his son's name was called. As the enormity of Jonathon's accomplishments sink in, his father thinks there will be even more reflection.

"I think there'll be more emotions and feelings," he said. "Just the depth of it all."