COLUMBUS, Ohio -- When winger Nikolai Zherdev signed a three-year contract with the Columbus Blue Jackets in August, no one knew for sure when the Russian left winger would make his National Hockey League debut. 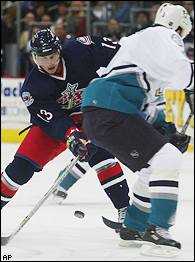 Zherdev, the fourth overall pick in this year's draft, made his
NHL debut Tuesday night -- 40 seconds into the Blue Jackets' 2-1
victory over the Anaheim Mighty Ducks.

"I felt very, very welcome. I even saw some signs that said,
'Welcome Nikolai,'" he said through an interpreter.

Zherdev played 10:59 and drew wild applause every time he
stepped on the ice.

He had his first shot blocked, and his biggest moment came when
he swooped in from the right wing on a two-on-one late in the game.
He waited, waited, waited, but goaltender Martin Gerber stopped the
shot.

"He had a couple of scoring chances and he played great,"
Columbus coach and general manager Doug MacLean said. "I know
after the first shift I was pretty excited about what I saw out
there. He's got tremendous potential to say the least."

Zherdev, 19, played his last game with CSKA on Nov. 24 and flew from
Moscow to Toronto on Sunday. He then went with Don Boyd, the Blue
Jackets' chief of amateur scouting, to Ottawa where he was
interviewed by the U.S. Consulate there on Monday in the final step toward
immigration. It's not yet known how he arranged to leave Russia.

The Blue Jackets placed defensemen Rostislav Klesla and Jaroslav Spacek on injured reserve Monday which made room for Zherdev on their 23-man roster. Klesla is expected to miss four to six weeks after spraining his medial collateral ligament Saturday night in a loss to Washington. Spacek is day-to-day after spraining his groin Nov. 26 against Nashville.

It is expected that either the Russian Ice Hockey Federation or Zherdev's team, CSKA (the Central Red Army), will claim that the player has yet to complete military service, and will seek his return to Russia. However, according to the transfer agreement between the NHL and the International Ice Hockey Federation, Zherdev was free to join the Blue Jackets in August after he signed a three-year contract and the team paid the $100,000 transfer fee.

According to NHL sources, Zherdev's exit visa was "mislaid," preventing his leaving for the United States in time for the start of the season. Though the NHL has been inquiring as to Zherdev's status since August, proof of the player's military obligation has not been provided and Zherdev has maintained he hasn't taken an oath of duty.

Bill Daly, the NHL's chief legal officer, stated that Zherdev can play with the Blue Jackets until further notice, saying, "At this point we've not been provided with sufficient evidence to establish either A, that he has a compulsory military service obligation, or B, that he's conscripted in the Russian military."

If Zherdev's departure is protested by the Russian federation or his Russian team, the matter will be heard by an independent arbitrator. The move is believed to be welcomed by the NHL. Though Russia is a member of the IIHF, its teams often arbitrarily assert military requirements as a means of obtaining larger transfer fees and preventing their players from leaving. But while a hearing may settle Zherdev's matter, it may not settle the entire situation. The NHL's current agreement with the IIHF expires at the end of the 2003-04 season; it's expected that the Russian federation either will play a major role in shaping a new agreement or distance itself from the agreement entirely.

Zherdev, a gifted playmaker and accurate shooter, was the top Russian taken in the draft last June. Recently, he was named captain of the Russian national junior team and was expected to play a key role in the country's quest for its third straight title.

CSKA coach, Viktor Tikhonov, told the Russian sports daily
Sport-Express, "To begin with, he fled his team and, secondly, he
fled from his army obligations."

"We will not let this case go away and we will seek
sanctions," said Valeri Gushin, a CSKA vice president.

Two seasons ago Stanislav Chistov of the Mighty Ducks and Alexander Svitov of the Tampa Bay Lightning, both first-round picks in 2001, were taken from their Russian team in Omsk and pressed into military service. The move was orchestrated by the team's president to prevent the players from leaving for the NHL. However, it turned into an internal political tug-of-war when the players were transferred to Moscow to play for CSKA. The Russian federation ruled they could not play for CSKA, although they did participate in international tournaments and helped Russia to the gold medal in the 2002 World Junior Championships. After fulfilling their year of military service, both players joined their NHL teams in June 2002.

Zherdev was accompanied to Columbus by his Ottawa-based agent, Alexander
"Sasha" Tyjnych. Tyjnych also is serving as interpreter for Zherdev, who will stay in a hotel until
he gets acclimated to the area.

Anaheim forward Sergei Fedorov, who moved from Russia at a
similar age, said there are many challenges ahead for Zherdev.

ESPN.com NHL writer Jim Kelley and The Associated Press contributed to this report.