NEW YORK -- Mike Richter's place in New York Rangers history was sealed a decade ago, when he helped break a 54-year curse.

His spot in the Madison Square Garden rafters was filled Wednesday night when his No. 35 was retired by the only NHL team he ever played for. 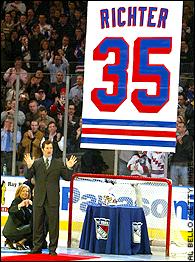 "Every time someone puts on a Rangers sweater, they'll look up there and see what a champion should look like," said captain Mark Messier, who played with Richter for 11 seasons.

A series of concussions forced Richter into an early retirement last summer after 15 seasons with the Rangers, the club he backstopped to the Stanley Cup title in 1994 after a 54-year drought.

"I can tell you that any sense of loss has been replaced by the feeling of gratitude and joy," Richter said. "I'm leaving with the realization that the time spent here has been nothing short of an amazing gift."

He stood with his wife and two children in the goal crease next to a table on which his famous Statue of Liberty mask rested. The banner rose at the end of the 45-minute ceremony from the top of the net to its place next to the pennant commemorating the 1994 championship.

Eddie Giacomin's No. 1 and the No. 7 Rod Gilbert wore are the only other numbers to have been retired by the Rangers. They couldn't produce what Richter did -- a championship.

"He was one of the greatest Rangers," Gilbert said. "He was spectacular."

Richter reached 300 victories, but just days after -- during his 301st win -- he sustained his career-ending concussion. That hit in November 2002 came just seven months after a concussion that cut short his previous season.

"Right about now, I'm wondering whose idea it was to get a guy who retired from head injuries to memorize a speech in front of 18,000," Richter said to the adoring crowd that pleaded for "one more game."

There was no amount of rehab to heal him like the kind that got him back on the ice after major injuries to each knee in 2000 and 2001.

"I never played with a guy more committed to making himself better," said Adam Graves, another fan favorite from the 1994 team.

On this night, 15 months after his final game, he again led his former teammates on the ice. Only he went to center ice while the rest of the Rangers gathered behind the goal he defended for so many years.

"He deserves it," said Giacomin, who dominated the Rangers' goaltending record book before Richter arrived. "It's unheard of that he played in New York 15 years."

"I know I don't have the vocabulary he does," Messier said.

Richter was a three-time All-Star and the MVP of the 1996 World Cup in which he led the United States to a gold medal. He takes into retirement a silver net that bears the names of all his teammates, and a 19-foot boat named "True Blue 35."

"This experience has taught me many lessons," Richter said, "and has been shared by so many fine people that made it all possible."