BUFFALO, N.Y. -- A hockey fan disgruntled by the NHL lockout
is taking his frustration to the streets. 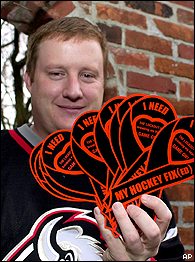 "I need my hockey fix(ed)" reads the newest version of those
familiar magnetic car ribbons that express everything from national
pride to cancer awareness.

Creator Doug Sitler got fed up watching millionaire players and
owners squabble while the only ice time for fans this winter has
been scraping windshields.

"Here's these two powerful big-money organizations fighting, and
the fans are left in the dark," he said.

The magnet is black with orange trim and lettering, like the NHL
logo. The slogan sends a dual message: Fans miss hockey and want
the sport fixed.

"I thought, 'Why not express my frustrations using a pop culture
phenomenon?'" Sitler said.

The fact that he sold more than 2,000 magnets soon after their
introduction showed him there are a lot of like-minded fans.

Sitler was actually more flattered than annoyed when someone
swiped the magnet off his car. And it has been fun watching them pop
up around town.

"The first person I saw who had one was a
70-year-old woman in a Lexus," he said.

"I think it's a good idea to keep it fresh in everybody's mind
that the fans miss hockey," said Kate Resetarits, who stuck a
magnet on her car.

There's no worry at the moment that hockey will resume and
render the magnets obsolete.

On Friday, the lockout was in its 121st day. No talks have been
scheduled since Dec. 14, when the NHL rejected a players'
association proposal and its own counteroffer was turned down.

"I haven't seen one glimmer of hope in any of these months of
talking," Sitler said. "Unfortunately, it doesn't look like there
will be any hockey unless a miracle happens -- and I hope that does
happen. I really want hockey. I'll go nuts."

The ribbons can be purchased at www.hockeyribbon.com.