After 6½ hours of negotiations, with Wayne Gretzky and Mario
Lemieux at the bargaining table, talks broke down Saturday, leaving
the already canceled hockey season beyond saving. 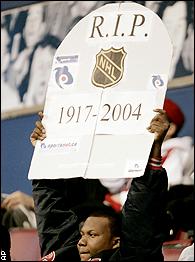 "It's certainly not going to be resurrected after today,"
players' association senior director Ted Saskin said. "It's 100
percent certain coming out of today's meeting that nothing could
impact the cancellation of the season."

Just three days after the season was called off because of the
protracted lockout, the NHL and the union restarted talks at an
undisclosed location in New York.

However, Gretzky, the managing partner of the Phoenix Coyotes,
and Lemieux, the player-owner of the Pittsburgh Penguins, couldn't
help the sides bridge the gap over the salary cap.

"Mario and I were happy to be part of the process, and everyone
seemed to work very hard together," Gretzky said. "We had a
constructive meeting, and we only hope they will continue meeting
for the betterment of the NHL and its fans."

On Wednesday, Bettman canceled the season, saying it was too
late to play any semblance of a schedule. That made the NHL the
first major North American sports league to lose a full season to a
labor dispute.