Scott Niedermayer has left the New Jersey Devils to play with his brother on the Anaheim Mighty Ducks. 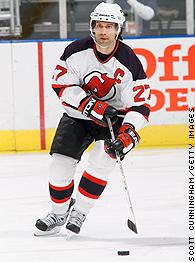 Niedermayer, the NHL's top defenseman in the 2003-04 season, agreed to a four-year, $27 million deal Thursday that will take him across the country and make him a teammate of his brother Rob.

"I think it was a big factor," Niedermayer's agent Kevin Epp said. "Playing with Rob, the West Coast, closer to family. A little bit of everything."

Epp said Niedermayer picked the Ducks over the Devils on Wednesday afternoon, despite New Jersey offering over $1 million more per season and the willingness to add a fifth year to the deal.

Rob Niedermayer, who was a restricted free agent, also agreed to a four-year deal with Anaheim on Thursday that will pay him $8 million.

Scott Niedermayer, who will turn 32 later this month, has played in 13 NHL seasons -- all with New Jersey. Along with goaltender Martin Brodeur, Niedermayer anchored the defense that helped the Devils win three Stanley Cup titles in a nine-year span.

New Jersey's last championship was a seven-game victory over Rob Niedermayer and the Mighty Ducks in 2003.

Under new general manager Brian Burke, the Ducks are trying to rebuild. They missed the playoffs in 2003-04, the last season before the NHL lockout, and were out of the postseason for the three years before their run to the Western Conference title.

"Brian really sold him on what he's prepared to do and trying to build Anaheim into a Stanley Cup contender," Epp said.

Scott Niedermayer is a playmaker and should be helped further by the elimination of the center red line. Now he can make home run passes from the defensive zone into the opponent's zone.

Rob Niedermayer was acquired by Anaheim from Calgary in March 2003. The 30-year-old forward has 129 goals and 207 assists in 696 NHL games. He played his first eight seasons with the Florida Panthers.

Both brothers live in British Columbia.