PITTSBURGH -- A jersey worn by No. 1 draft pick Sidney Crosby in his first National Hockey League game was found Tuesday at Pittsburgh's international airport after vanishing from luggage checked onto a US Airways flight to Buffalo by his father. 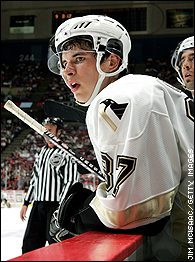 The shirt was discovered wrapped in plastic at the foot of a stairway used to load luggage onto planes by a US Airways employee. The luggage was partially unzipped and the shirt missing when the elder Crosby claimed it after the flight Sunday.

A US Airways spokesman said the company was in the process of returning the jersey to Crosby's father.

The shirt was worn by Crosby in the Penguins' season opener in New Jersey last week.

US Airways and police officials were investigating the incident Tuesday afternoon.

In January, the jersey Crosby wore in Canada's gold-medal win over Russia was stolen by a baggage handler.

"When I got the bag off [the baggage-claim conveyor] belt in Buffalo, it was partially unzipped," Troy Crosby told the Pittsburgh Post-Gazette. "I noticed it right away."

The jersey Sidney Crosby wore in the gold-medal game at the World Junior Hockey Championships was stolen by an Air Canada baggage handler.

Jacques Lamoureux took the jersey from Crosby's bag in January
when the phenom passed through Montreal's airport after the
tournament.

Lamoureux, fired afterward, wanted the jersey for his daughter. It eventually ended up in a Montreal-area mailbox.

It was auctioned off for $22,100, with the proceeds going toward youth hockey charities and south Asian tsunami relief.

Lamoureux has since apologized and donated $300 to victims of
criminal acts.