MONTREAL -- Just like old times in Montreal, Youppi! was there to high-five Andre Dawson and Gary Carter amid the wild cheers of a sellout crowd. 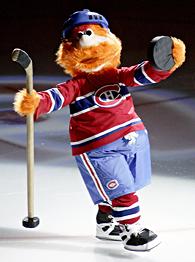 Sadly for fans of the city's late and lamented baseball team, on Tuesday night he was standing on skates at center ice of the Bell Centre -- not outside the Olympic Stadium dugout -- and all three were wearing Montreal Canadiens jerseys.

Dawson and Carter, two of the greatest players in the Expos' 36-year history, were on hand as guests of the Canadiens for a ceremony honoring the four numbers retired by the defunct National League team. The franchise moved to Washington, D.C., following the 2004 season and was renamed the Nationals.

"The inevitable did happen and they moved, but I think baseball will always live on here," Dawson said. "You really hate to see the city lose its franchise because it's going to be very tough to get it again. But to see the banner hanging and know that the fans will always remember, not the names, necessarily, but the support that was here and how it was successful for a long time."

Youppi!, the Expos' fuzzy orange mascot since 1979, did not move with the team. Wildly popular with children, the Canadiens made an unprecedented -- and frequently mocked -- free-agent acquisition, buying the rights to the mascot, including the trademark exclamation point on the back of his jersey.

"I think it's wonderful that his tradition will live on here as a Canadien," Carter said. "He was always well-known, well-received, well-liked throughout all of baseball and
everything, and he goes from one sport to the next. We know who the mascot is inside the mascot, so we knew that he could skate. I think he'll be a great representative."

Now clad in hockey gear, complete with a stick and blue helmet, the Muppet-inspired creature made his successful debut before Tuesday night's game against Boston.

Sporting a Canadiens jersey with the No. 10 he wore as an All-Star outfielder with Montreal from 1976-86, Dawson was greeted with a standing ovation, as was Carter, the only player inducted into the Hall of Fame as an Expos player, who followed wearing his familiar No. 8.

With the mascot's help, the two unfurled a powder blue banner reading "Expos de Montreal, 1969-2004" and sporting the team's logo along with the four retired jerseys: Dawson, Carter, Tim Raines' No. 30 and Rusty Staub's No. 10.

"It's just a class act by the Canadiens," Carter said. "The whole organization, the way they've always supported us, stood behind us. We always kind of took a backseat to them because they were always the Stanley Cup winners, it seemed like, for all those
years and I know where the fan base and appeal was and everything, and then all of a sudden we started to get good as a baseball team and we started getting the same kind of fans coming to Olympic Stadium in our good years."

The crowd cheered just as loudly when the Canadiens introduced their new mascot.

With the arena's lights dimmed, the video scoreboard showed Canadiens defenseman Sheldon Souray looking into the camera in the team's dressing room and offering encouragement to an unknown, who was obviously making his debut.

Cheers filled the rink as the familiar mascot's image was seen wearing a Canadiens uniform and grabbing a toy stick and oversized puck before racing onto the ice to the approval of the audience.

Youppi! did a circuit of the rink, dropping a puck at center ice and -- doing his best Guy Lafleur impersonation -- driving the slot before burying a right-handed wrist shot into the wide open net, crouching down and pumping his fist as he skated back to the bench.