EDMONTON, Alberta -- Paul Coffey wiped away tears as his No.
7 Edmonton Oilers jersey was raised Tuesday night in a ceremony
marked by the sound of trumpets, the streaming of confetti, the
flashing of lights in a darkened arena and the deafening roar of
fans chanting his name. 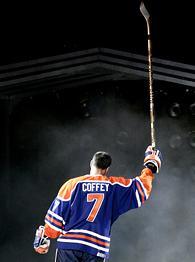 "All I can say is it's great to be an Oiler," Coffey said as
he stood at center ice with his family before the Oilers played the
Phoenix Coyotes.
"I'll always consider myself to be an Oiler and Edmonton to be
my home."
It was the first time Oilers great Wayne Gretzky returned to
Edmonton as the coach of the Coyotes.
The Oilers have already retired Gretzky's jersey along with
those of Jari Kurri, Grant Fuhr and Al Hamilton.
All of them were with Coffey during the ceremony that began with
the 44-year-old Hall of Fame defenseman, dressed in his vintage
blue Oilers uniform, taking a lap in a spotlight around the rink as
the fans gave him a standing ovation.
Oliers general manager Kevin Lowe paid tribute to his former
teammate and to his contribution to Edmonton's dynasty teams of the
1980s.
"When Paul Coffey played with these guys they were the most
exciting team that ever played in this league," he said.
More than an hour before the game, fans were already lined up 10
deep outside Rexall Place for the sellout.
Earlier Tuesday, 500 fans jammed the main atrium at city hall to
honor Coffey as city officials proclaimed it "Paul Coffey Day."
Drafted sixth overall in 1980 by the Oilers, Coffey broke the
NHL record for goals by a defenseman in 1986 when he scored 48, two
more than Bobby Orr.
After a salary dispute, Coffey was traded to the Pittsburgh
Penguins and went on to play for Los Angeles, Detroit, Hartford,
Philadelphia, Chicago, Carolina and Boston in his 21-year career.
He won a fourth Stanley Cup in Pittsburgh and in Detroit
captured his third and final Norris Trophy as the league's top
defenseman.
He ended his career as the 10th-leading scorer in NHL history
with 396 goals and 1,135 assists in 1,409 regular-season games.