DETROIT -- Red Wings defenseman Jiri Fischer collapsed on
the Detroit bench late in the first period of Monday night's game against the Nashville Predators and was hospitalized in stable condition. 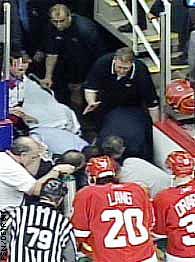 The team announced that Fischer had a seizure and was doing fine. Red Wings coach Mike Babcock later said Fischer's heart had stopped and was restarted at the arena.

"They hooked up the auto defibrillator and shocked him," Babcock said.

Fischer was also given CPR at the bench by team physician Dr.
Tony Colucci before the 25-year-old native of the Czech Republic
was removed on a stretcher.

"He's been described as very jovial," said team spokesman John Hahn, who added that Fischer was visited at Detroit Receiving Hospital by teammates. "He'll be here in the hospital the next two days undergoing some further testing."

Fischer logged 4 minutes, 52 seconds of playing time -- covering
six shifts. He recorded one hit and was on the ice when Nashville's
Greg Johnson scored the game's only goal. That occurred just 1:02
before the game was halted.

No makeup date was immediately announced.

As fans were still filing out of the arena, Hahn said Fischer
was taken to the hospital and was stable, breathing on his own and responsive.

"It's our understanding, the reports from the hospital, that he
is fine and he will be fine," Babcock said.

Fischer was diagnosed with a heart abnormality in September
2002, causing him to miss two days of practice. The problem was
found on an electrocardiogram as part of a routine battery of tests
during the Red Wings' preseason physicals.

When the result was abnormal, Fischer was given a stress test
that he passed. He said that his heart essentially is a little
thicker than normal.

"I wasn't scared about the abnormality," Fischer said at the
time. "But I was scared about not playing hockey again. That was a
shock for me."

Play was stopped with 7:30 left in the period after the Red
Wings alerted officials to a problem. Medical personnel worked on
Fischer at the door to the bench for several minutes before he was
wheeled back toward the Red Wings dressing room.

"First of all, everybody is definitely caught by surprise,"
Red Wings captain Steve Yzerman said. "We turn and see Jiri laying
between the boards and the bench and we're not sure why.

"You fear for the guy's life at that moment. I can't remember
anything like that."

The decision was made to resurface the ice then, and the
remaining time was to be added to the second period. But the game
was postponed instead.

"It was obvious to everybody involved that it was the right
decision," Predators coach Barry Trotz said. "It was very
disturbing to both sides and I think the NHL recognized it, the
players recognized it. To be quite honest, the game became very
secondary. When a friend or a teammate was in danger like Jiri was
in, then the decision was made for everybody to reschedule it."

It was not immediately clear whether the game would be played in
its entirety or resume from the point of the stoppage.

"Our primary objective is that Jiri is taken care of," Trotz
said.

"Obviously, she was very worried and concerned. She just wanted
to be next to Jiri," Shanahan said.