DETROIT -- The Red Wings were back on the ice on Tuesday,
but their thoughts were with teammate Jiri Fischer, who collapsed on
the bench the night before and was revived with help from a
defibrillator.

The team was practicing for its Wednesday home game against
Colorado, while Fischer's equipment and jersey hung in his dressing
area -- a reminder of the player who remained hospitalized and was
undergoing tests. 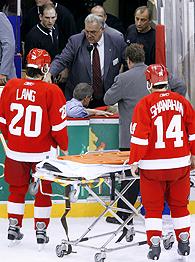 "We were all at the rink today, talking about it," Kris Draper
said. "For us, it's not going to be easy. The next time you walk
in and see Fisch's stall, guys are going to have some pretty
uncomfortable memories.

"It's something that we have to do. We just have to step up and
play hockey."

"He's actually cracking some jokes," Colucci said during a
news conference at Joe Louis Arena. "Everything appears to be well
right now."

The 25-year-old Fischer was in good condition after he began
having convulsions on the bench late in the first period against
the Nashville Predators. Colucci wasn't able to detect a pulse
after Fischer collapsed, and an auto defibrillator was used on the
player.

After performing CPR, Colucci said he detected a good pulse and
Fischer was taken out of the arena by ambulance to Detroit
Receiving Hospital. Colucci said Fischer's heart might have
stopped, but he didn't know for how long.

Fischer's blood pressure and heart rate were stable by the time
he arrived at the hospital.

"There's no way to speculate on what triggered it," Colucci
said.

The team announced to the crowd Monday night that Fischer had a
seizure, but Red Wings coach Mike Babcock later said Fischer's
heart had stopped.

On Tuesday, Colucci said the defibrillator indicated that
Fischer's heart may have been experiencing ventricular tachycardia,
which is a racing type of heartbeat, or ventricular fibrillation, a
heart fluttering.

Both can cause death, and ventricular fibrillation is a common
cause of sudden cardiac arrest.

When asked how long Fischer's heart had stopped, Colucci said:
"Sometimes when you're feeling for a pulse you can't really say
did it stop, or does he have a very weak, thready pulse."

Colucci said he didn't know when Fischer could play again or how
long he will remain in the hospital. He many things could have
caused Fischer's collapse, but he believed the problem was
"cardiac in origin."

"We're going to evaluate him on a daily basis," he said.

Players and Babcock said their thoughts remained with Fischer as
they prepared to play the Avalanche on Wednesday.

"You just think about how bad Jiri Fischer would like to be
playing hockey," Babcock said. "We have that chance. We better
make good on that chance."