NEW YORK -- Mark Messier's connection to Madison Square
Garden began in 1991, the first night he skated onto the ice with
the C on his New York Rangers sweater.

After 10 seasons and one Stanley Cup championship that erased a
half-century of despair, he went from being a captain to THE
captain.

Messier's No. 11 was raised to the Garden rafters Thursday
night, joining those of former teammate Mike Richter, and earlier
stars Eddie Giacomin and Rod Gilbert, who found their way to the
Hockey Hall of Fame but never to Broadway's Canyon of Heroes.

"He brought something to New York that Rod and I have never
brought to New York and that is winning the Stanley Cup," Giacomin
said.

Cameras flashed throughout the 1-hour, 15-minute ceremony that
delayed the Rangers game against the Edmonton Oilers -- Messier's
first NHL team.

A large revolving lighted C adorned one offensive zone, while a
similar-looking 11 spun on the other side of the ice in the
darkened arena. Stenciled into the playing surface were other 11s,
with a simple message of "Thank You Mark" along the boards.

"He made us believe that the Stanley Cup was our destiny,"
said Adam Graves, who spoke on behalf of 20 teammates from the 1994
championship team, coaches Mike Keenan and Colin Campbell, and
general manager Neil Smith.

"He changed the culture," Graves said. "He made us stronger
as players, stronger as a team and stronger as an organization." 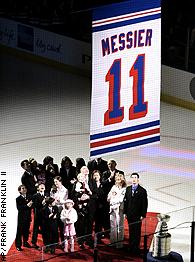 Just a few blocks away, the Empire State Building glowed in red,
white and blue to honor the man who played 25 NHL seasons.

"Mark brought the level of hockey to another dimension in New
York," Gilbert said. "When they won, it just felt like we won."

The current Oilers were all seated on the bench, with Edmonton
coach Craig MacTavish and general manager Kevin Lowe -- both members
of the '94 Rangers -- standing behind them. They along with this
version of the Rangers banged their sticks in unison on the ice and
the boards in a traditional hockey salute during the speeches and
gift presentations. Messier received fishing gear, a portrait and a
family trip to Ireland.

Then his jersey was raised slowly from a table, situated next to
one that held the Stanley Cup.

After Messier hoisted the trophy over his head and shared it
again with the adoring crowd, No. 11 went up at the end of the ice
and took its place in front of the championship banner that
represents his legacy.

"It's a symbol of the hard work and dedication of all the
players I played with," Messier said, not of the title banner but
the one that bears his name.

Messier read an open letter to the fans in a taped message, but
the closing words were drowned out but cheers and screams that grew
deafening when he was brought down the tunnel to the ice through an
aisle lined by today's Rangers.

"I will never forget the 10 years I had the honor to be the
captain of the New York Rangers," he said.

The first of many tears were already rolling down his face when
he emerged from under the stands.

The tears only continued through several speeches, including a
recorded one by defenseman Brian Leetch, who now plays for the
Boston Bruins.

Only part of that was audible as it was accompanied by chants of
"Bring Him Back!"

Leetch spoke of the hockey lessons he learned from his mentor
that began with when they were opponents and continued when they
shared a locker room, car rides and hotel rooms.

"Each bad game hurt even more because I didn't want to let him
down," Leetch said.

Messier's place in the hearts of the fans was sealed more than a
decade ago when the Rangers won the Stanley Cup after 54 years
without a title. He was brought to New York from Edmonton, where he
won five championships in seven years, to win just one more.

"I came here wanting to win the Stanley Cup, and what I got was
a life of experience," Messier said in a thought interrupted by a
brief breakdown and a quivering lower lip.

It took him three seasons in New York to deliver, though all
seemed lost in the semifinals when the Devils held a 3-2 series
lead with a chance to close it out in New Jersey.

Messier guaranteed there would be a Game 7 in the Garden, and he
scored the tying and winning goals en route to a hat trick to make
good on his promise.

"Typical Messier," Keenan said of the prediction. "I didn't
mind it."

Messier retired in September second on the NHL scoring list to
Wayne Gretzky with 1,887 regular-season points. He left the game
six goals away from 700 -- a mark reached by only six players -- and
11 games short of tying Gordie Howe's record of 1,767.

"He was a Hall of Famer before he got here," Richter said,
"but he's the greatest Ranger I ever played with."