PITTSBURGH -- Penguins star and owner Mario Lemieux, one of hockey's greatest players, announced his retirement for the second time at a news conference held Tuesday afternoon. 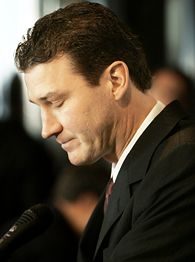 Lemieux, a Hall of Famer who won Stanley Cups and scoring titles and then battled through cancer and heart problems in a comeback, announced his decision at a news conference.

"If I could still play this game I would be on the ice," Lemieux said. "This is it, and it hurts."

The 40-year-old Lemieux learned in early December he has atrial fibrillation, an irregular heartbeat that can cause his pulse to flutter wildly and must be controlled by medication.

Lemieux is also experiencing side effects with his medication, and he may undergo surgery to correct the problem. He spoke Tuesday with Toronto coach Pat Quinn, who told Lemieux he had the same operation and has felt much better since he did.

"I don't want to take pills the rest of my life," Lemieux said. "It's not something I want to go through."

Lemieux, the NHL's seventh-leading career scorer with 1,723 points, tried to return a week after being hospitalized with the problem, but it flared up again during a Dec. 16 game against Buffalo and he has not played since.

Lemieux has been practicing the last several weeks with the intent on returning this season but, with the Penguins stuck in a 10-game losing streak and with no hope of them making the playoffs, decided to quit playing for a second time.

"I have two main reasons for retiring here today," Lemieux said. "The first one is I can no longer play at the level that I was accustomed to in the past and that has been very, very frustrating to me throughout this past year. The second one is realizing that my health, along with my family is the most important thing in the world.

"We both knew it was coming. It's never an easy thing," Penguins rookie sensation Sidney Crosby told the Sports Network of Canada. "He has been great with me, he's taught me a lot. I've been fortunate to have that.

"I think he's a guy that has so much passion for the game. It makes you want to be around him. It's fortunate for him that he's leaving on his own terms," Crosby told TSN.

Lemieux previously retired after the 1996-97 season following years of back problems and a 1993 cancer scare in which he was diagnosed with Hodgkin's disease, but he returned midway through the 2000-01 season and has played since.

However, he has again fought through injuries -- including two major hip problems -- that caused him to miss most of the 2001-02 and 2003-04 seasons. He had seven goals and 15 assists in 26 games this season.

"How many more points would he have had if he stayed reasonably healthy?" Hall of Fame forward Bryan Trottier said. "Four hundred? Five hundred? Six hundred? We'll never know. No respect to Wayne Gretzky, Gordie Howe, Mark Messier, Bobby Orr, Gilbert Perreault ... but Mario did things nobody else could ever do."

Lemieux had fewer goals than Gretzky (690 to 894) and fewer assists (1,033 to 1,963) but played nearly 600 fewer games than The Great One, many of them surrounded by far less talent than Gretzky played with most of his career in Edmonton.

Lemieux was such a talent, he scored a goal on the first shift of his first game as a rookie in 1984. Then, 16 years later in December 2000, he needed only a half-minute on the ice to set up a goal in his first game following a 44-month retirement. He had two
assists and a goal that night and likely would have won another scoring title had he played the full season.

"It was a great challenge playing against him," New Jersey goalie Martin Brodeur said. "I really looked forward to facing him and was fortunate to be able to play with him internationally. He took care of business on and off the ice and certainly will be missed."

Lemieux, a first-ballot Hall of Fame inductee in 1997, led the Penguins -- the NHL's worst team before he was drafted in 1984 -- to successive Stanley Cup championships in 1991 and 1992. He won six NHL scoring titles, three MVP awards and two Conn Smythe awards as the Stanley Cup playoffs MVP.

After his stunning return in December 2000, which surprised even his close friends, Lemieux helped the Penguins to the Eastern Conference finals that season but the team has not made the playoffs since.

Michel Therrien coached Lemieux in his first game as head coach of the Pens -- Dec. 16 vs. Buffalo -- a game that would also be Mario's last.

"It's a sad day for Pittsburgh, for our team," Therrien told TSN. "We lost our leader, our captain. Here in Pittsburgh, we're concentrating on young players. ... To have Mario as a leader, and almost a father, to those young kids ... it's unique for those young guys to learn from one of the best.

"We all know what he did for this team. The NHL today lost one of the greatest players to ever to play, if not the best. He always had a huge impact wherever he'd go," Therrien said.

Lemieux also became the first major pro sports star to buy the team for which he played, assembling a group that bought the team in federal bankruptcy court in 1999.

Lemieux's group has owned the team since but announced last week it is selling -- a possible prelude to the team leaving Pittsburgh in June 2007. The team has partnered with a casino company that is promising to build the Penguins a new $290 million arena if it obtains a slot machine parlor license for downtown Pittsburgh, but there appears to be little hope the team will stay if there is no new arena.

One reason Lemieux is selling is because he doesn't want to be the owner who relocates the team from Pittsburgh.

He insisted the stress he is under as an owner did not affect the decision to retire as a
player.

"I don't feel great when I wake up. Even to this day I am not feeling 100 percent, and it's frustrating to me," he said.

Famous figures from around the sport and other sports reacted to Lemieux's announcement.

"It's always a tough situation when a great player has to retire. He's meant so much to not only the National Hockey League but the city of Pittsburgh and that franchise," Gretzky said. "The good news is we've got some good, young players like Crosby and [Alexander] Ovechkin come along, so I'm sure they'll carry the torch. But you don't replace players like Mario Lemieux. He's a great hockey player and a good person. The game will miss him."

Commissioner Gary Bettman had this to say:

"Mario's exceptional play earned him accolades. His ability to face adversity earned him respect. His devotion to Pittsburgh and the Penguins earned him admiration. His dedication to hockey -- at both the NHL and International levels -- earned him the enduring appreciation and thanks of everyone associated with the game. We celebrate his playing career and wish him only the best in the future."

Even Bill Cowher, coach of the Steelers, took a break from the Super Bowl hype to weight in on Lemieux's retirement.

"The grace with which he played the game … he was a magician on the ice. There is not a better ambassador for the game or a better person," Cowher said. "He's done everything he could to keep this franchise going, and his presence alone has brought a lot of pride to the city of Pittsburgh. Any time like a guy like that walks off the ice, you say, 'Thank you.'"