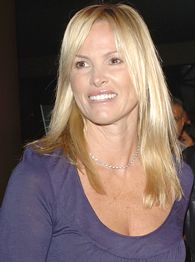 At the request of NHL commissioner Gary Bettman, Tocchet did not attend the Coyotes' game against the Blackhawks on Tuesday night. In a statement, the Coyotes said Tocchet "was flying back East this evening to address the allegations in a meeting with Bettman."

Lt. Col. Frank Rodgers of the New Jersey State Police told ESPN2's Cold Pizza that he did not know if or when Tocchet would turn himself into police.

"My understanding is he'll contact us today ... We look forward to speaking to him in depth on the matter," Rodgers said Wednesday morning.

Gretzky, hockey's greatest player, is in his first season coaching the Coyotes and is a part-owner of the team.

Gretzky's wife, actress Janet Jones, was among those implicated, two law enforcement officials told The Associated Press, speaking on condition of anonymity because no bettors have been publicly identified.

New Jersey State Police Superintendent Col. Rick Fuentes said a four-month undercover investigation dubbed "Operation Slap Shot" into the New Jersey-based ring discovered the processing of more than 1,000 wagers, exceeding $1.7 million total, in a 40-day period. The bets were placed on professional and college sports, mostly football and basketball. Fuentes declined to identify the NHL players who made wagers but said none bet on hockey.

Rodgers, deputy superintendent of investigations with the New Jersey State Police, confirmed to TSN of Canada that "12 NHL players or people closely associated with NHL clubs" -- including a team owner and a member of one coaching staff, a tally Rodgers said was in addition to Tocchet-- placed bets with the ring. He would not say whether any of the bettors with ties to the NHL bet on hockey.

John Hagerty, spokesman for the New Jersey Division of Criminal Justice, told ESPN.com's Scott Burnside that those being investigated for making bets through the ring are "all over the country and Canada as well."

Lt. Gerald Lewis of the New Jersey State Police public information office told ESPN.com that other athletes, some retired and some active, would be interviewed, but he wouldn't say how many are connected to the NHL.

Lewis said the interest in talking to the people who were placing bets is to determine whether there was an illegality on the part of the bettors and to try to learn more about the scope of the betting operation.

He said the NHL had not been contacted during the investigation even though the league has a security arm that tries to educate players about possible legal problems. He said the state police were under no obligation to share their information with the league before the laying of charges.

Lewis said he would hope "that at some point [the NHL] would investigate."

The developments came at a sensitive time for the NHL, which is trying to win back fans after a season-long lockout and just days before many of the league's best players will showcase their talent at the Torino Olympics.

"We understand that Mr. Tocchet's conduct in no way involved betting on hockey," NHL deputy commissioner Bill Daly said. "And, while betting on football or other sports may be the pervasive issue, it in no way justifies poor judgment or otherwise alleged
inappropriate conduct."

Speaking after the league's general managers adjourned their meeting Tuesday, Bettman said, "I have retained Robert Cleary, who is a former U.S. attorney for New Jersey, to do an internal investigation for us, and I'll be meeting with him first thing tomorrow morning.

"In response to the allegations against Coyotes associate coach Rick Tocchet, and consistent with club policy, the Phoenix Coyotes organization declines further comment on the situation until definitive information becomes available," team president and COO Douglas Moss said in a statement. "The focus of the Coyotes organization is to continue our drive for a playoff position."

Tocchet was served with a criminal complaint Monday and was expected to travel from his Arizona home to answer charges of promoting gambling, money laundering and conspiracy, Fuentes said. A criminal complaint informs Tocchet of authorities' intention to charge him formally and the need for him to arrange to travel to New Jersey for formal charging or face arrest.

Hagerty said that all the charges are in the second degree and that all carry a maximum 10-year sentence.

Earlier Tuesday, Gretzky had said Tocchet would be on the bench for the Coyotes' home game against Chicago and it would be "business as usual." But Bettman changed that plan, summoning Tocchet to a meeting in New York City.

"Everyone in the world is innocent until proven guilty," Gretzky said. "He's a great guy and a good friend. He's just going through a tough time right now, obviously, and we've got to let it run its course. It's a situation that's obviously a concern for the organization at this point.

"The sad thing about this whole scenario is that Rick is a wonderful person and a great guy, so I hope everything works out in his favor. It's hard because I love the guy. He's a great guy, you know. I just hope it all works out for him," Gretzky said.

Gretzky said his wife was in California. The two talked, he said, but she did not speak about any involvement she might have had.

"We didn't get into it other than she was concerned about Rick and she felt it was a tough situation with him," Gretzky said, "and she would sit down at some point and answer questions that everybody has for her and be her own person."

Gretzky said "absolutely not" when asked whether she had placed bets for him.

"I'm standing here trying to answer questions, and it's not even me this is about," Gretzky said to reporters. "It's the frustrating, hard part for me, but I understand. I'm a big boy, and you guys have a responsibility and a job to do, and that's fine."

Except for trips to Las Vegas, Gretzky said, he's no gambler.

Tocchet acknowledged that a New Jersey state trooper arrested in connection with the gambling ring case is his friend. Tocchet said he would cooperate with the investigation but didn't answer when asked whether he'd surrender to authorities.

Authorities said Tocchet and state police trooper James Harney were partners in the operation, with the ex-NHL forward providing the financing.

Tocchet, one of three associate coaches on the Coyotes' staff, took over the head coaching duties for 10 days in December while Gretzky was with his dying mother.

Tocchet was a fan favorite during his two stints with the Philadelphia Flyers (1984-92, 2000-02). Star Flyers center Peter Forsberg on Tuesday described Tocchet as "a good guy, a funny guy."

"I think everybody is surprised," Forsberg said. "It's definitely not good for the sport to hear something like that."

Flyers forward Simon Gagne played briefly with Tocchet in Philadelphia and called him "one of the best guys I knew."

Harney, 40, was arrested Monday and has been suspended from the force. The eight-year police veteran was charged in an arrest warrant with official misconduct, promoting gambling, money laundering and conspiracy. Another man accused of taking bets is James Ulmer, 40, who was charged with promoting gambling, money laundering and conspiracy.

Harney and Ulmer were free after posting 10 percent of their bail. Harney had $100,000 bail; Ulmer had $50,000 bail. The two men were expected to be arraigned in New Jersey state Superior Court in Burlington County within two weeks.

Craig Mitnick, a lawyer representing Harney, said his client hadn't decided whether to contest the charges in court.

The police investigation into the ring started in October 2005 after authorities received a tip claiming that Harney was performing sports wagering from his Marlton home and that he was taking phone calls during his patrol job based out of the agency's Moorestown station, Fuentes said.

Fuentes did not disclose the bettors' names and said charges against more individuals were possible. He described one of them as a "movie celebrity."

A search of Harney's house recovered more than $250,000 worth of Rolex watches and nine plasma-screen televisions, including two from his bathroom.

The NHL veteran, who -- according to The Philadelphia Inquirer -- listed "The Godfather" as his favorite movie in the Flyers' 2000-01 media guide, was hired by the Avalanche as an assistant coach in 2003.