ATLANTA -- Bernie "Boom Boom" Geoffrion, the hockey Hall
of Famer credited with inventing the slap shot, died Saturday
before his No. 5 jersey was retired by the Montreal Canadiens.

Geoffrion, who helped lead powerhouse Montreal teams to six
Stanley Cups in the 1950s and early '60s, died after a brief battle
with stomach cancer. He was 75.

Geoffrion died in an Atlanta hospital, the Canadiens said. His
cancer was discovered during surgery last week.

He didn't live to see his number retired, but still was able to
relish the knowledge that his place in history was secure, said
Rejean Houle, former Montreal general manager and current head of
the Canadiens alumni.

"He had known six months ago, and he enjoyed every minute of
it," Houle said. "At least it's not like we decided to do it
after he passed away."

The Canadiens went ahead with the ceremony before Saturday
night's game against the New York Rangers. Geoffrion's wife,
Marlene, his three children and his grandchildren were in
attendance.

His number went up right next to the No. 7 of Marlene's father,
Canadiens great Howie Morenz, just as Geoffrion predicted many
years ago when the couple was dating.

"Tonight marks the realization of his life's dream and brings
closure to a magnificent career," said Danny Geoffrion, who was
coached by his father with Montreal in 1979-80. "Dad, your family
loves you more than you'll ever know."

Danny addressed the crowd in English, and brother Bobby spoke in
French. A moment of silence was observed in Bernie Geoffrion's
honor just moments after Marlene and their children raised his
banner.

Geoffrion's passing came exactly 69 years after Morenz's casket
was viewed by thousands of fans as it laid in state at the Montreal
Forum, three days after he died on March 8, 1937.

Marlene, married to Bernie for 54 years, flew from their home in
Atlanta along with their daughter, Linda, as the ceremony proceeded
according to Geoffrion's wishes.

With the lights dimmed and spotlights in the shape of No. 5
moving throughout the crowd, the first big cheer of the ceremony
came when a clip was shown on the videoboard of Geoffrion at an
Oct. 15 press conference explaining his reaction to learning that
his number would be retired.

Former teammates Emile "Butch" Bouchard, Dollard St. Laurent,
Andre Pronovost, Phil Goyette, Marcel Bonin, Dickie Moore, Jean-Guy
Talbot and Henri Richard were introduced to the crowd, each wearing
vintage jerseys with the numbers they made famous. Richard's No. 16
and Moore's No. 12 are among the eight numbers previously retired
by the team. 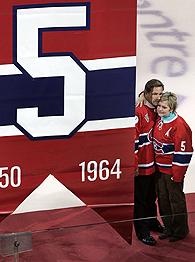 Geoffrion's friends in Atlanta were caught off guard by his
death.

"He left really quick," said Dan Bouchard, who played for the
Atlanta Flames when Geoffrion coached the team in the 1970s. "I
just found out last week that he was not doing well and ... he's
gone."

Geoffrion was the first coach of the (now Calgary) Flames,
guiding the team to the playoffs in only their second season. He
also had brief coaching stints with both the Rangers and Canadiens.

But it was as a player that Geoffrion really stood out. He was
the first to bring his stick far above his head when shooting,
creating a powerful shot that gave led to his nickname -- the sound
of his stick hitting the puck made a boom and the sound of the puck
hitting the boards made another boom.

In 1960-61, Geoffrion won the Hart Trophy as the league's MVP
after joining Richard as the only players to score 50 goals in a
season.

He was hired as coach of the Rangers, but didn't even get to
start the season because ulcers forced him to have surgery to
remove part of his stomach.

He was elected to the Hall of Fame in 1972, less than a month
after being hired to coach the expansion Flames.

"I can't believe this," Geoffrion said at the time, according
to the book "The Babes of Winter" that chronicled the Flames'
first three seasons. "First I get the new team, now I make the
Hall of Fame."

Geoffrion, with his thick French-Canadian accent, moved into
broadcasting for the Flames until the team moved to Calgary.

Geoffrion became Montreal's coach in 1979, replacing Scotty
Bowman, but stepped down after only 30 games due to conflicts with
the team's management.

Geoffrion's supporters say the Canadiens waited too long to
retire his number.

"They procrastinated a long time," Dan Bouchard said.
"Everybody else in Montreal who made the Hall of Fame had their
jersey retired. His jersey should have been hanging up in the old
Forum. That was the mecca."

Geoffrion was admitted to an Atlanta hospital last week.

"Today is a very sad day across the hockey world and here in
Atlanta," Thrashers coach Bob Hartley said. "Boom Boom was an
incredible man who meant a great deal to me, and I'm fortunate to
have called him a friend and a mentor."