LOS ANGELES -- After missing out on the playoffs, the
Los Angeles Kings decided to clean house. 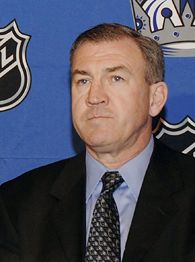 But Los Angeles went 42-35-5 this season and failed to reach the
postseason for the first time since 2002.

"I'm very grateful to Dave and appreciative of his 29 years of
service to the Los Angeles Kings," team CEO and governor Tim
Leiweke said. "He has been loyal to the Kings sweater from day
one and continues to be. We have offered him an opportunity to
remain with the organization in a capacity to be determined.
That decision is his and will be dependent on his discussions in
the future with our new leadership."

Torchetti was named interim coach on March 22, one day after
Andy Murray was fired. The team finished 5-7-0 under
Torchetti's watch.