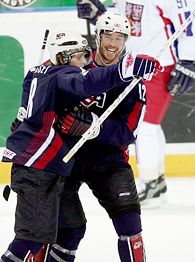 The Americans finished third in Group E with a 3-2 record and six points. Canada topped the group with eight points, followed by
Finland with seven. The Czechs, who had six points, also made the
quarterfinals.

"I think it was our best game so far," U.S coach Mike Eaves
said. "All our lines, all our units, played very well together and
was a strong contributing factor to the victory today."

Sweden, which plays the Americans on Wednesday, was second in
Group F with six points, three behind Russia.

Belarus beat Switzerland 2-1 to qualify from Group F with six points. Later, Slovakia faced Ukraine and needed at least a tie to
move past Switzerland and take the last quarterfinal spot.

Ryan Malone of the Pittsburgh Penguins paced the Americans with one goal and one assist. Mark Cullen scored the other goal.

Zbynek Michalek scored for the Czechs, cutting the Americans' lead to 2-1 at 7:25 in the second period.

The Americans capitalized on a defensive mistake by the Czechs to take a two-goal lead at 7:25 in the third session.

After intercepting the puck near the Czech blue line, Malone set up Brown in front of the goal. The Los Angeles Kings forward, tied for second in goal scoring behind Canada's Sidney Crosby, one-timed the perfect pass with a shot past Czech Republic goalie Milan Hnilicka.

After being shut out by Finland 4-0 in their second-round opener, the Americans beat host Latvia 4-2 to clinch a quarterfinal berth before meeting the Czechs.

Switzerland, which entered the game with a single loss, can advance only if Ukraine defeats Slovakia.