BOSTON -- Peter Chiarelli was hired by the sagging Boston Bruins as general manager on Friday, getting a four-year contract
two decades after serving as captain of the Harvard hockey team. 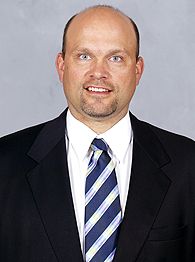 "I know from my college days the passion that the fans in this
area have for hockey and the Bruins and I share that excitement,"
he said.

Chiarelli had spent the past two years as assistant general
manager of the Ottawa Senators. He succeeds Mike O'Connell, fired
March 25 with the Bruins headed toward a last-place finish and
their third non-playoff season in the last six.

To get Chiarelli, the Bruins agreed to send the Senators a
conditional pick in the 2007 draft or beyond.

The Bruins picked Chiarelli, a leading candidate during the job
search, after Nashville assistant GM Ray Shero was hired Thursday
as general manager of the Pittsburgh Penguins.

Shero had been interviewed in Boston and appeared to be the
team's choice earlier this week, but compensation and authority
issues may have bothered him. Bruins executive vice president
Charlie Jacobs -- and son of the team owner -- is a big supporter of
interim general manager Jeff Gorton and has said the new GM will
determine whether Sullivan returns for a third season as
coach.

The Bruins plan a news conference for next Wednesday to formally
introduce Chiarelli.

Chiarelli's first year as Ottawa's assistant general manager
covered the labor dispute that produced a lockout and forced
the cancellation of the 2004-05 season.

The 41-year-old Chiarelli takes over a Boston team that has one
playoff series victory in 10 seasons and traded its top scorer, Joe Thornton, and most exciting player, Sergei Samsonov, during the
current season.

"Peter Chiarelli is the right man to guide this team," Bruins
owner Jeremy Jacobs said. "We considered and talked to many
qualified candidates, looking for someone with knowledge of today's
game and its players, a forward thinker with ideas, someone who has
worked in the new financial landscape of the NHL and a person who
has gained the respect of his peers."

Chiarelli captained the Harvard team before graduating in 1987
with a degree in economics.

He is the seventh general manager in team history and breaks a
string of five who had served previously in the organization as a
player, assistant coach or coach.

Charlie Jacobs had said the Bruins wanted to conduct a thorough
search and were in no rush to hire a successor to O'Connell, a
former defenseman and assistant coach with the team who became
general manager on Nov. 1, 2000.

Chiarelli has "a great passion for and knowledge of the game
and he is very respectful of the great hockey tradition in this
city with an Original Six franchise," Charlie Jacobs said.

Team president Harry Sinden, a former coach and general manager
of the Bruins, said Chiarelli "has played at a high level, he
understands the business from both sides of the desk having been a
player agent for several years and he helped develop the Ottawa
franchise into a consistently winning team."

The Senators had at least 94 points in each of his six seasons
with the team. They had the most points this season in the Eastern
Conference but were eliminated in a five-game playoff series by
Buffalo. The Bruins had 94 points twice in six seasons and only 74
this season.

Charlie Jacobs said early this month he wanted a general manager
who would build for the long term while retaining hope of immediate
success.

"The intention," he said, "is to find somebody who embodies
that understanding, that maybe victory isn't tomorrow, but it's the
process and the road that ultimately will pay the best bottom line
dividends for the fans of Boston."

Chiarelli, a native of Ottawa, was a player agent before joining
the Senators in 1999 as director of legal relations. He had 21
goals and 49 points in 109 games at Harvard and then played one year
in Europe.