EDMONTON, Alberta -- For the past week, the top NHL stars have been on display at the Stanley Cup finals. But before the end of the month, we'll see the future stars of the league at the entry draft in Vancouver. 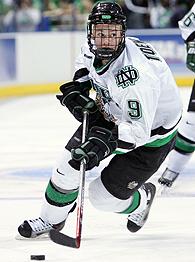 Five of the draft's top prospects were in Edmonton on Monday to take part in the playoff festivities, and practice their media skills.

What did they have to say? Whose game do they try to emulate? Here's a look:

You've already got an idea of what the Staal hockey blood is like. Big brother Eric has been one of the postseason's best players as the Hurricanes are vying for the Stanley Cup. Second-oldest brother, Marc, is an up-and-coming defenseman for the New York Rangers. Jordan, 17, is next in line.

Sound bite: "I think my skating, for a big guy, is very good. My leg strength is pretty good, so coming out of the corners, it's kind of hard to contain me, and I think that's one of my main assets.

"My shot could be better. It's kind of a struggle to get it to the net sometimes and that's one of the things I'm going to work on over the summer, shooting pucks on net. My favorite player is Todd Bertuzzi. I think he's a complete player and that's what I'd like to be. He hits guys, he scores goals and makes tough plays. He's one of the guys I like to play off of."

The Madison, Wisc., native just finished an outstanding freshman season at the University of Minnesota. The center led the nation in rookie scoring with 51 points (18 goals, 33 assists). Kessel also played for the United States at the World Championship in May.

Sound bite: "I think I have the ability to make plays and improve the team in the offensive end. I make guys around me better. My strength, everyone can improve on that, and that's the biggest thing I need to work on."

The 18-year-old Canadian center is being heralded as a great skater who was a member of Canada's 2004-05 under-18 team. Brassard has been compared with Tampa Bay's Brad Richards for his smart play. What's his dream hockey scenario? To have dinner with NHL legends Wayne Gretzky, Mario Lemieux and Ray Bourque.

Sound bite: "All the skills, my ability with the puck and playmaking is very good. I'm more of a playmaker than a goal scorer. I like the game of Scott Gomez, his vision, and the speed of Simon Gagne.

"Maybe at 25 years old I will be that fast. I need to improve my strength, work hard in the gym, and that will make me a better skater and better all-around player. You always need to improve your skating. When I got cut by the under-20 team, I learned about intensity, that I have to be intense in every game I play."

American defenseman Johnson said he patterns his style of play after the Avalanche's Rob Blake because he is a smart, great two-way player. Johnson has also be heralded for his offensive-minded play.

At 6-foot-4, 222 pounds, the 18-year-old still has some room to grow. Scary thought. He was a member of the U.S. under-18 team for the 2005 World Championship and was on this year's world juniors team. He will attend the University of Minnesota in the fall.

Sound bite: "I think my hockey sense and the ability to read plays both offensively and defensively is my biggest strength. I think I have a pretty good shot and I skate pretty well and make good outlet passes and see the ice well.

"I think I have to improve everything; if you target everything you'll be a more complete player. In the weight room, I'm always in there, I always want to get stronger. Strength is always an issue, so I'm always working out."

Toews (pronounced TAYZ) has already reached a respective star level in his own right. Expected to be a top-three pick in this year's draft, Toews helped Canada win a gold medal at this year's World Junior Championship.

The 18-year-old center has impressed many scouts, especially over the past year, with his maturity. "There's no panic in his game," Team Canada assistant coach Craig Hartsburg told reporters at the world juniors in January. Shattucks-St. Mary's high school, the hockey breeding school that recently has produced the likes of Jack Johnson and Sidney Crosby, offered Toews a scholarship when he was 16. After one season, he accepted a full ride to North Dakota.

Outside of the hockey world, Toews looks up to Tiger Woods and Lance Armstrong.

Sound bite: "I like to score goals and set up goals, and that's the type of player I am. I'm always trying to create opportunities in the offensive zone. I love Joe Sakic, so I'm always trying to look up to him and the way he plays. I love his style. I always try to work on my skating. I don't think you can ever be a good enough skater, so that's something I work on, along with my physical play."