PITTSBURGH -- Evgeni Malkin still wants to play for the
Pittsburgh Penguins as soon as possible, his agent said Monday,
even though Malkin's Russian team announced the star forward has
renegotiated his contract and plans to stay out of the NHL for
another season. 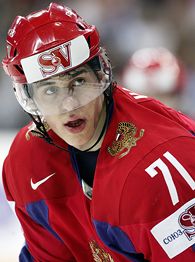 Russian super league team Metallurg Magnitogorsk posted a story
Monday on its Web site that Malkin met late into Sunday night with
team officials and had reworked a three-year contract into a
one-year deal that would allow him to become a free agent in 2007.

However, Malkin's agent, JP Barry, told The Associated Press in
a telephone interview that Malkin told him he wants to play in the
NHL this season. Malkin also has been quoted in Russia as saying he
wants to play in Pittsburgh soon.

"His wish is to play in the NHL, and in Pittsburgh," Barry
said. "We will continue to talk to him about his future, and we
will decide the best course for him at this time."

Malkin's agents, Barry and Pat Brisson, apparently were not with
him in Russia during his talks with Metallurg.

Penguins spokesman Tom McMillan said the team was aware of the
Russian team's announcement, but had no comment until it could sort
out what was going on.

Malkin was the No. 2 pick in the June 2004 draft behind last
season's rookie of the year, fellow Russian Alexander Ovechkin, and
is widely considered the best player in the world not playing in
the NHL. The Penguins have been planning for Malkin to join them
next month, especially after the Russian hockey federation said it
would sign a transfer agreement allowing its players to move to the
NHL for a $200,000 fee that would be split by all the Russian
teams.

The other major European hockey federations already follow the
transfer agreement. Russia did not do so last season, thus blocking
Malkin from joining the Penguins a year ago.

But the Russian federation didn't sign the agreement despite
considerable lobbying by new president Vladislav Tretiak,
apparently because of considerable pressure from top Russian clubs
that want to negotiate much higher transfer fees for star players
such as Malkin. Malkin's club is believed to want $2 million or
more for Malkin's rights.

Also complicating the issue is Malkin's repeated switching of
agents. Until June, he was represented by Barry and Brisson, who
also represent Penguins star Sidney Crosby. Malkin then hired Don
Meehan, who was giving interviews as Malkin's agent until late last
week. However, Malkin rehired Barry and Brisson within the last few
days.

Meehan said last week that the 20-year-old Malkin could
circumvent his Russian contract and leave to play for the Penguins
by simply resigning his job and giving the team a two-week notice
that he was leaving. Russian law apparently permits such
resignations, even if a contract is in place.

Malkin's new agents are believed to be exploring using the same
loophole to get Malkin into the NHL this season.

The Penguins have been counting on getting Malkin to join a
mostly youthful team that already includes Crosby, who had 102
points as an 18-year-old rookie, and Jordan Staal, the No. 2 pick
in the recent NHL draft. The team showed video of Malkin playing in
the Olympics on its scoreboard during late-season home games this
year in an effort to boost season ticket sales.

Malkin led Metallurg with 47 points, including 21 goals, in 46
games last season. He also was one of the top players in the
Olympics, with two goals and six points for Russia.