ST. LOUIS -- The St. Louis Blues didn't stop at retiring Brett Hull's No. 16 jersey on Tuesday night. They also arranged to name a street after him. 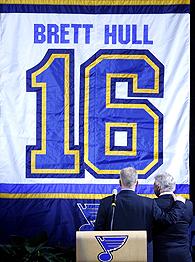 Just the jersey would have been plenty for Hull, who thanked his enforcers for taking good care of him, admitted to his old coaches that he knew he could be a handful and even thanked the media while bragging that his exploits certainly made their job easier.

"To have an organization think that much of you is more than one guy can ask," Hull said.

Hull's nickname, "Golden Brett," was a takeoff of father Bobby Hull's moniker, "Golden Jet." The pair are the only father-son combination to score 600 goals and 1,000 points each, and now they're the only father and son to have their jerseys retired in any sport.

The banner with Hull's number was slowly raised to the rafters to a Neil Young song with appropriate lyrics: "Old man take a look at my life, I'm a lot like you."

The team also arranged to call the street that borders their arena "Brett Hull Way."

Adam Oates was among the 20 former teammates who attended the ceremonies before the Blues-Detroit Red Wings game. The present Blues players all wore No. 16 during warmups, just as they all wore No. 2
during Al MacInnis' jersey retirement ceremony last April.

"Brett, nothing compares to the three years I got to play with you," Oates said. "It was the highlight of my career."

Chairman David Checketts made honoring Hull a top priority when his ownership group took over last summer. He was hopeful that the occasion, which prompted the first sellout crowd of the season for a struggling franchise often playing to half-capacity or less, would spur the beginning of a revival.

Hull recalled a fiery dressing-down from Brian Sutter, his first coach with the Blues, as pivotal in his career. The rookie said he thought Sutter was going to tell him, "Boy, am I lucky to be coaching you."

"He sat me down and had a half-hour tirade, and I was flabbergasted," Hull said. "I had no idea how good I was, the impact I could have on the game.

"Without that meeting I'm not sure I would be standing here today, and I thank Brian so much for that," he said.

Sutter was briefly a teammate before becoming the Blues' coach for the 1988-89 season, and he quickly recognized Hull's talents. He said Hull was the best scorer he's seen in 30 years in the NHL and "maybe the best ever."

Hull won two Stanley Cups, one each with the Dallas Stars and Red Wings, after leaving St. Louis when the Blues refused to honor his demand for a no-trade contract. He's an assistant to the president of the Stars.

But he said he's always been a Blue.

"From the day I arrived in St. Louis, you made me feel like I was born and raised here," Hull told the crowd. "Unfortunately I wasn't able to retire here, but I can tell you my heart never left."