PITTSBURGH -- They chugged Labatt Blue and shared man hugs at Happy Hour just down from 66 Mario Lemieux Place on Tuesday night because the planets aligned and the politicians agreed and hockey was staying in Pittsburgh. 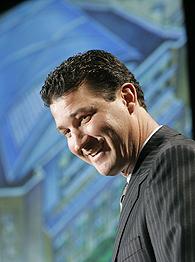 Lemieux was nowhere to be found.

He slipped out of a press conference a mile across town, shielded in a herd of dark power suits, away from the handshakes and backslaps. The job was done, Lemieux saved hockey in Pittsburgh a third time, and the quiet Canadian who has somehow become the face of a blue-collar American city was tired.

"In the deal business, there's a term that people sometimes call 'deal fatigue,'" NHL commissioner Gary Bettman said. "I think the process was wearing on him."

Across the street from Mellon Arena, the energy was palpable. Horns played, fans sighed and roughly a quarter of the sweaters worn Tuesday night proudly displayed Lemieux's No. 66.

It had been a long, chilly winter in Pittsburgh, with talk swirling that Lemieux would take the team he built and shuttle it off to Kansas City. And while it prompted plenty of venom toward the Midwestern folk waiting to pounce on a revived franchise, the backlash never really hit Lemieux.

He was a Penguin his entire career, revived the franchise in 1984 and then bought it out of bankruptcy 15 years later. But promises were made then for a new arena, and with each passing month, Lemieux's face grew more worn and his intentions were a little fuzzier.

Last week, Lemieux played hardball when the Penguins issued a letter saying the team planned to pursue relocation actively. Within three days, the negotiations heated up and the deal was done.

"I honestly didn't think he'd let the team leave," Penguins fan Dale Holub said as a sold-out crowd headed into Mellon Arena on Tuesday night to watch the Penguins play Buffalo. "This team means so much to the city. He knows how much it means. He wouldn't let them down."

Holub, wearing a No. 66 jersey, said he couldn't hate Lemieux even if he did move the Penguins. But it became obvious late Tuesday that it was never really an option. Lemieux stood on the ice at Mellon Arena just before the start of Tuesday night's game, grabbed a microphone and sheepishly lowered his head.

He said he had an announcement to make.

"Tonight, I'm proud to announce that your Pittsburgh Penguins will remain right here," Lemieux said. "Thank you, Pittsburgh. Have a great night."

Motley Crue's "Home Sweet Home" blasted over the speakers, and video of Lemieux's playing days blipped on the big screen. Then it flashed to the present, with kid phenom Sidney Crosby, and the crowd erupted as the Penguins skated onto the ice.

Lemieux looked up at the rafters near a sign that said "Mario for Governor." Years ago, when he was chasing Wayne Gretzky, Lemieux said he wanted to be remembered as a man who helped keep hockey in Pittsburgh.

"That was my goal," Lemieux said Tuesday night, "and we finally achieved it."

But the old haunt was in serious need of a wrecking ball and is older than Lemieux. The new deal calls for a $290 million arena that the team hopes will be finished sometime during the 2009-10 season.

When word of the relocation letter hit eight days ago, Pittsburgh mayor Luke Ravenstahl received 1,500 emails between Monday and Tuesday. All of them, from owner to governor, felt the burden of a city that has embraced a team zooming toward the playoffs.

Ultimately, the fans had their say in the decision by packing the arena. They were rewarded Tuesday night, sweating out a 5-4 win in a shootout. The demographic varied from middle-aged diehards to teen Crosby swooners.

"Everybody believed the Penguins belonged here in Pittsburgh," Bettman said. "There are fans here that care passionately about this team."

The love starts with Lemieux, who made even the local politicians' jobs a little tougher during the negotiation process. Gov. Ed Rendell said it was hard to sit across the table from Lemieux because he's "a guy I've looked up to."

"He personally sacrificed a lot of money to keep the Penguins in Pittsburgh," Rendell said, "and you're thinking that in the back of your mind, that this is a guy who already has made a sacrifice. We wanted to make sure it happened."

When it was finally over Tuesday, Lemieux's poker face cracked a smile. He wants a vacation. He'll stay in Pittsburgh and keep his responsibility as an owner.

For Lemieux, it's home.

"He's a legend. Probably the biggest sports legend ever in this town," said Shawn Hoover, a season ticket-holder who endured years of empty arenas and losing teams. "He saved hockey three times.

"He never left this town, even when he had every opportunity in the world to do it. He stayed here," Hoover said.

Elizabeth Merrill writes for ESPN.com. She can be reached at merrill2323@hotmail.com.