DETROIT -- Detroit Red Wings owner Mike Ilitch doesn't know
why he didn't think of it sooner, but he is happy it's done now. 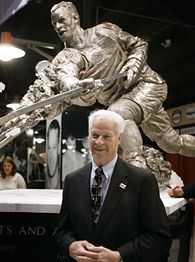 The 1,500-pound bronze and glass statue of Howe was unveiled
Tuesday afternoon inside the west entrance of Joe Louis Arena.

"Not too may things choke me up," said Howe, 79, a Hockey Hall
of Fame member who played for the Red Wings for 25 seasons." ...
So I guess that's the way of expressing the feeling that I have."

The sculpture by Omri Amrany of Highland Park, Ill., depicts
Howe in the act of shooting and recreates the motion using four
different full-length sticks, the shaft of another, the puck flying
off one of the sticks and flying ice chips.

It is 6 feet, 4 inches from the base to the top of Howe's head.
The base, which is inscribed with statistical and biographical
information on Howe on each of the four sides, weighs 3,000 pounds.

Known as "Mr. Hockey," Howe still holds NHL records with 26
seasons, 1,767 games, and 1,924 games including playoffs. He is
second all-time with 801 goals and third all-time with 1,850
points. He won four Stanley Cups with the Red Wings, won six Art
Ross Trophies as the league's top scorer, six Hart Trophies as MVP,
and was a NHL All-Star selection 20 times.