MOUNT HOLLY, N.J. -- Former NHL player Rick Tocchet pleaded guilty Friday to running a sports gambling ring but might not have to serve any jail time. 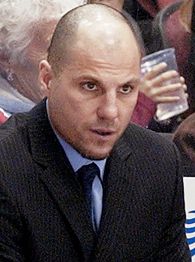 Tocchet, who played for six NHL teams in a 22-year career, is on leave from his job as an assistant coach for the Phoenix Coyotes. He pleaded guilty to charges of conspiracy to promote gambling and promoting gambling. Such offenses usually do not carry a jail sentence for first-time offenders.

"It's a huge operation and I think it exposes to people the allure of gambling, illegal gambling, in New Jersey," state criminal justice director Gregory A. Paw said outside the courthouse.

The maximum sentence for the charges Tocchet pleaded guilty to are 10 years in prison and a $50,000 fine. Paw would not say whether prosecutors will ask for jail time when Tocchet is sentenced on Aug. 17.

But the more serious suspicions when the case erupted 15 months ago were not substantiated. There did not seem to be mob ties or betting on hockey. No other hockey figures are being charged or will have to testify in a criminal trial.

"I'm sure everyone recalls the manner in which the case was
initially announced and described,'' said Kevin Marino, the defense lawyer for Tocchet. "I think [Friday's] proceeding speaks for itself."

The 43-year-old Tocchet is the third man to plead guilty in the case, which New Jersey authorities dubbed "Operation Slapshot." The others, including state trooper James Harney, who Paw said took bets while sitting in his patrol car watching traffic, are expected to get jail time.

Janet Jones Gretzky, the wife of hockey great Wayne Gretzky, was accused of betting but was not charged in the case.

Prosecutors said in February 2006 that the ring handled $1.7 million in wagers during a 40-day stretch that began at the end of 2005 and included college football bowl games and the Super Bowl.

Tocchet did not speak during Friday's court hearing except to answer yes or no questions. When asked by his attorney, Marino, if he ever bet on professional hockey, Tocchet said "no."

Later, outside the courthouse, Marino said "today's proceeding makes clear this was not an organized crime hockey ring because there was no betting of any kind on professional hockey."

"Rick Tocchet was not involved with fixing hockey games," Marino told ESPN.com's Mike Fish on Friday. " If you look at the way it was pitched, you wonder why was it called 'Operation Slapshot?' "

Marino said Tocchet has not spoken with the NHL about how his guilty pleas will affect his coaching career.

"That matter will be addressed separately," Marino told ESPN.com. "We have not yet spoken with the National Hockey League. I suspect we will do that at some point in the future."

Coyotes president Doug Moss said he did not know enough about Tocchet's plea to comment.

"I don't have any reaction yet because I don't know anything about it. I just don't know what's happened yet," Moss said. "We wouldn't have a reaction until the league has a comment on it."

NHL spokesman Frank Brown said, "Today's development allows the league to complete its investigation of the matter. There is no timeline on when that investigation will conclude. We will not comment further."

A lawyer for Gretzky and a publicist for Jones Gretzky did not return messages for comment early Friday.

Information from The Associated Press and ESPN.com investigative reporter Mike Fish was used in this report.