PITTSBURGH -- That's Crosby, with a C. 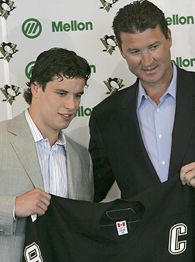 Sidney Crosby, already the youngest player in NHL history to get 100 points in a season and to win a scoring title, is now the youngest to wear the captain's C on his sweater. The Pittsburgh Penguins gave Crosby the long-anticipated title on Thursday, months after they initially wanted to do so.

At the All-Star break in January, general manager Ray Shero asked Crosby if he wanted to take on the responsibility of being a team captain while still a teen. With the Penguins streaking at the time, Crosby didn't feel the timing was right. Now, he does.

"I understand there is going to be a lot more responsibility on my shoulders with this, but it's something I'm ready for," Crosby said. "I feel very comfortable with it and I'm just excited to get things going."

The Penguins' timing was more than coincidental. Crosby was 19 years and 297 days old when he became a captain; previously, the youngest captain in league history was Tampa Bay's Vincent Lecavalier (19 years, 324 days). Crosby would not have been the youngest had the Penguins waited until the season started in October to give him the C, as he turns 20 on Aug. 7.

"I was always told that age is just a number," Crosby said. "I try not to let it get in the way of anything."

Or the very reason why Crosby chose not to ascend to the captaincy midway through a season in which the Penguins won 47 games and made the playoffs after winning only 22 games the season before.

"I just thought it wasn't right for me. As a team, we were playing great and you don't want to disrupt things like that," Crosby said. "Individually, I was not ready to accept that responsibility quite yet. Going through the playoffs and having that experience has probably given me more confidence."

To Shero, the maturity Crosby showed in carefully weighing the decision before declining to become the captain last winter illustrates why, in his first two NHL seasons, Crosby has played well beyond his years.

Crosby followed up his 102-point season at age 18 by totaling 120 points this season, beating out San Jose's Joe Thornton for the scoring title by six points.

"Part of what makes Sidney not your average 19-year-old kid is that he gave it some thought for two or three weeks and came back to us and said he didn't feel the time was right," Shero said. "He didn't really turn it down, he deferred it basically."

Crosby talked to several veteran players before agreeing to be the captain -- including forwards Mark Recchi and Gary Roberts, both of whom are more than twice his age. Recchi and Roberts are not signed for next season, but the Penguins want them back.

"We don't know what the situation is going to be, but the veteran guys I know pretty well and really respect, they had some good feedback and it really made me comfortable with the whole idea," Crosby said. "I think it's important, when you're a captain, to have that respect by your peers."

Crosby becomes the 15th player to wear the Penguins' C. Penguins co-owner Mario Lemieux wore it three different times: from 1988-94, from 1995-97 after sitting out a season for health reasons and again from 2001-06 after he came out of retirement. The Penguins had four alternate captains last season, including Crosby.

Next up for Crosby: making a lot more money.

Crosby is entering the third season of the three-year entry-level contract he signed after being the No. 1 draft pick in 2005, one that pays him $850,000 a season plus bonuses worth much more than that. Shero and Crosby's agents, Pat Brisson and J.P. Barry, are expected to begin discussing a contract extension when the NHL free-agent signing period starts July 1.

"He's our franchise player and a guy we want to be here the rest of his career," Shero said. "Once we can start talking to him on July 1, hopefully we have some common ground here."

"We want to make sure everything goes right and it's the way everyone wants it," Crosby said. "It's part of the business side of things, but I'm more than confident that everyone's going to be happy with it."