Canadian billionaire Jim Balsillie has accused NHL commissioner Gary Bettman of forcing the owner of the Nashville Predators to break off discussions about the sale of the team to Balsillie, ESPN.com has learned.

The Canadian ownership group also alleges Bettman directed Predators owner Craig Leipold to focus on closing a deal with William "Boots" Del Biaggio III, who is the front man for a group trying to bring an NHL team to Kansas City.

"We were advised by Mr. Leipold that the commissioner had found out about the existence of the negotiations and ordered him to immediately cease any further communications with us," Balsillie's legal representative, Richard Rodier, told ESPN.com this week. 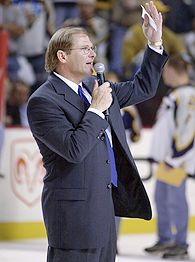 In a series of e-mails obtained by ESPN.com, Leipold and Rodier discuss Bettman's alleged involvement in the breaking off of negotiations between the two sides and the commissioner's uneasiness with the prospect of a deal being signed between the two parties.

Bettman declined to speak to ESPN.com directly, but denied the allegations through NHL spokesman Gary Meagher. Still, the accusations raise questions about whether the commissioner overstepped his bounds. The issue could lead to a showdown with the NHL's board of governors over whether Bettman acted appropriately and with the best interests of the league. The board is scheduled to meet next in September, likely in Chicago.

At the heart of the matter is a team whose sale will have repercussions for the NHL for years to come. The battle for ownership of the Nashville Predators might be the single-most important moment for the league in decades, even eclipsing in importance the lockout that scuttled the 2004-05 season.

On one side is Bettman, whose vision of the NHL continues to be one that includes teams scattered across America, even if many of those American markets are floundering. The failure of the Predators reflects badly on Bettman's vision. Their failure is his failure.

On the other side is Balsillie, who wishes to make the Predators the seventh Canadian team in a country whose love of the game seems to know no bounds. Balsillie has made it clear he would like to own an NHL team in Southern Ontario, specifically Hamilton, a blue-collar city west of Toronto. The six Canadian teams -- Montreal, Toronto, Ottawa, Edmonton, Calgary and Vancouver -- currently generate one-third of the 30-team league's revenues.

Many players have told ESPN.com they believe a new team in Hamilton would generate significantly more revenue than a team in Kansas City. Governors and GMs have told ESPN.com in the past year they believe a second team in Southern Ontario would be a surefire success. Phoenix Coyotes coach Wayne Gretzky, still one of hockey's most influential figures, recently said he thought a team in Hamilton would be a success.

In between these two solitudes sit Leipold and the Predators.

Leipold was sold on the league and the city of Nashville by Bettman a decade ago, but has since lost $70 million, $27 million in the two years since the end of the lockout. Even with one of the most active marketing departments in the NHL and one of the most exciting teams in the league, the Predators' average paid attendance last season was 13,815. After failing to find local investors to help shoulder the economic burden, Leipold decided to sell the team.

Enter Balsillie, the Canadian businessman who became wealthy beyond his wildest dreams by developing the BlackBerry personal technology device. A long-time hockey fan and player, it is Balsillie's dream not just to own an NHL team, but own a team in Canada.

Balsillie had been unanimously approved by the NHL's board of governors last winter as the new owner of the Pittsburgh Penguins. But when the league tried to enforce a number of last-minute stipulations on Balsillie's ownership, including restricting his ability to move the team and allowing for the league essentially to take control of the Penguins under certain circumstances, Balsillie walked away.

The Penguins, thanks to the intervention of Bettman and deputy NHL commissioner Bill Daly, ultimately were able to secure a new arena deal for owners Mario Lemieux et al. A short time later, unbeknownst to Bettman, Balsillie entered into discussions with Leipold to purchase the Predators.

In late April, the two sides were discussing the possible sale of the team to Balsillie at a price of $200 million. That figure was about $10 million more than the amount Del Biaggio's group was rumored to have been offering.

Contacted by The Sports Network of Canada hockey analyst Darren Dreger about the negotiations, Bettman denied there was any activity. According to Rodier, when Bettman found out they were on the verge of signing a letter of intent, he angrily called Leipold and told him to back off.

When asked about the e-mail exchanges, Bettman would not answer ESPN.com directly. But in response to questions, NHL spokesman Gary Meagher said, "the commissioner never issued a cease and desist order to Mr. Leipold."

When pressed further about whether Bettman had ever asked Leipold to back off in his negotiations with Balsillie, Meagher said he "absolutely" did not, and further, "there is no e-mail properly read and understood that would indicate to the contrary."

But in another e-mail to Rodier on May 3, Leipold wrote that he needed time "to smooth things over" with Bettman. A few days later on May 6, Rodier asked Leipold in an e-mail: "Will you be talking to gary [sic] to calm him down some more??.[sic]"

The other issue is whether Bettman was trying to freeze Balsillie out of the purchase process.

On May 6, Rodier wrote to Leipold: "If we are to break off because Gary wants to kill any possible deal for a team in Hamilton, then let us know now  and we can move on and you can take the deal with the KC group which is inferior to ours in every way except one."

In response, Leipold wrote, "the 'cease and desist' analogy (my language not Gary's), applies to your situation because of the leak that generated from your side."

The response seems to suggest that Leipold was forbidden from speaking to Balsillie, but not any other parties.

Shortly after these e-mail exchanges, Balsillie elected to bump his bid to the current $238 million offer in an effort to keep the negotiations on track. Leipold reportedly went back to Bettman and said he couldn't afford to pass up an offer at that amount. Leipold later signed a letter of intent to sell the team to Balsillie.

Negotiations subsequently went off the rails in part after Balsillie secured a lease for Copps Coliseum in Hamilton and took 14,000 deposits for season tickets over a two-day period. Both activities received widespread media attention and prompted a number of NHL sources to complain Balsillie was being too brash. Others noted Balsillie's actions were an attempt to level the playing field with the other main contender in Kansas City, where an arena is ready and suites have been sold. That arena is operated by the Anschutz Entertainment Group. The Anschutz family owns the NHL's Los Angeles Kings.

In a series of e-mails with ESPN.com this week, Leipold insisted the e-mails between him and Rodier do not tell the whole story and the full disclosure of communication between the two sides would tell a different story. But Leipold would not provide further information and described Rodier as a "rogue lawyer."

Rodier told ESPN.com there was no other communication that would alter the perception of these e-mails.

What happens now is anyone's guess.

On Wednesday in New York, Bettman met with Leipold and a group of Nashville-area businessmen who would like to buy the team. But sources close to the talks say the local bid will be millions of dollars lower than even the Del Biaggio bid, which is said to be shrinking as this drama unfolds. Further, Del Biaggio is said to be more interested in a possible expansion franchise than trying to untangle the Predators' web and move the team to Kansas City.

Even local Nashville ownership hopefuls have acknowledged that simply hitting the 14,000-average paid attendance threshold needed for the coming season to keep the current lease alive isn't enough to secure the team's future in Music City. The Tennessean hockey writer John Glennon has reported that potential owners say the team would need to average 16,000 in paid attendance over 41 home dates to break even. The team has never approached that number since its inception.

Leipold has been seen as a model owner. He marketed the team aggressively, at least until this season when the marketing budget has been reduced, and hired top hockey people such as David Poile to manage and Barry Trotz to coach. The Predators drafted well and developed talent patiently. Still, it is almost certain to continue to be a financial failure for as long as the team remains in Nashville.

If that's the case, given Balsillie's claim of Bettman's alleged tampering in the sale process, it's hard to imagine a scenario under which Balsillie could become an NHL owner while Bettman is still NHL commissioner.

Ultimately, these will be issues decided by the league's board of governors.