CHICAGO -- William Wirtz, the longtime owner of the
Chicago Blackhawks notorious for driving a hard bargain, died Wednesday at
age 77.

In an announcement on the team Web site, the Blackhawks said
Wirtz died at Evanston Hospital after battling cancer. 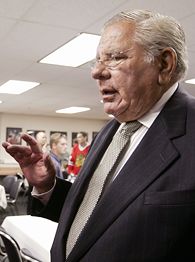 Wirtz was chairman of the Board of Governors of the National
Hockey League for 18 years and helped negotiate the merger of the
NHL and the World Hockey Association in the late 1970's.

"Bill Wirtz was a giant presence in a giant city, his beloved
Chicago and an even greater presence in the National Hockey
League," NHL commissioner Gary Bettman said in a statement.

"His 41 years as President of the Blackhawks and 18 years as
Chairman of the Board leave an incomparable legacy of contributions
to the game and to the League. His strength, intelligence,
character and passion have been ingrained indelibly in the
Blackhawks, in the League and in me. Bill was a true icon and a
great competitor."

Together with Chicago Bulls owner Jerry Reinsdorf, Wirtz helped
back the construction of the United Center, which replaced the
Chicago Stadium, the longtime home of the Blackhawks and Bulls.

But since moving there 12 years ago, the Blackhawks have made
just four playoff appearances -- only two since 1997. The Blackhawks
haven't played in the Stanley Cup finals in 15 years. As a result,
the Blackhawks -- one of the six original NHL teams -- average about
12,700 fans per game in an arena that seats 20,500.

"Bill Wirtz was a giant of a man whose passing leaves a tremendous void in Chicago. It was an honor to have been his partner for over 25 years. He was a person of great integrity, loyalty and generosity," Reinsdorf said in a statement.

Wirtz's stewardship of the Blackhawks was long questioned, with
the criticism becoming more vociferous in recent years. Many fans
blamed him for allowing too many good players to leave over the
years, and for his refusal to televise most home games.

At the United Center, the retired numbers of Bobby Hull, Stan
Mikita, Tony Esposito, Glenn Hall and Denis Savard hang high above
the ice. It has been years since players of that caliber have
played for the team.

There are other banners hanging from the United Center rafters,
touting the many successful seasons for the franchise. One stands
out: the one representing the Stanley Cup in 1961, the last time
the Blackhawks won the championship.

Wirtz often said his goal was for the team to win another
Stanley Cup, but he was not known to spend lavishly on the team.
His steadfast refusal to get into bidding wars to acquire the
services of the game's best players earned Wirtz the nickname
"Dollar Bill." That image changed somewhat when the club signed
goaltender Nikolai Khabibulin to a four-year, $27 million contract
in 2005.

Despite his reputation for paying close attention to the bottom
line, Wirtz was known for his philanthropy.

Since its establishment in 1993, Blackhawk Charities has donated
millions of dollars to worthy causes in Chicago, including the Boys
and Girls Clubs and the Amateur Hockey Association of Illinois.

Wirtz's interest in sports extended beyond the NHL. He served on
both the 1980 and 1984 Winter Olympic Committees. And for his
efforts on both the professional and amateur levels, Mr. Wirtz was
inducted into the Hockey Hall of Fame in 1976.

In addition to being president of the Blackhawks, Wirtz'
business endeavors extended to real estate, liquor
distributorships, catering, parking lots, banking, hotels and the
travel industry.