My understanding of the sky's map is limited to the Big Dipper (good nickname for Buffalo's Tyler Myers, by the way) and the constellation Orion. Orion is located on the celestial equator and can been seen across the world, much like Pat Quinn's head. Its name, Orion, refers to a hunter in Greek mythology. Since my late teenage years, whether I am in Mingo Junction, Ohio, or Vancouver, British Columbia, I always look up and locate Orion. It's my satellite to home and youth.

I first became aware of Orion from the now bankrupt movie production company Orion Pictures Corporation, which made movies from 1978-1998. I remember the company's animated intro prior to the start of a movie: stars from the constellation would twirl into the letter "O" before the entire word "Orion" was spelled out.

It seemed as if 46 percent of movies produced in the late '70s and early '80s, my HBO sweet spot years, were produced by Orion. I am sure this number is probably much lower. "Back to School," "10," "Hoosiers," "Platoon," "No Way Out" and others all began with the animated Orion logo. I would like to publicly thank the now defunct movie company and HBO for my astronomy acumen and the indelible image of Bo Derek jogging on the beach with wet, braided hair. ("Before the Internet, there was HBO." Now there is a slogan to believe in.)

Today, kids, teenagers, adults and Sean Avery don't so much stare up to the trees, clouds, airplanes, stars and 6-foot-9 NHL linesman Mike Cvik as much as they used to; now, most stare down at their cell phones and personal digital assistants (Jim Balsillie's PDA BlackBerry, yo). As a result of all this "looking down," we miss so much up in the heavens. We even look down at these things during dinner, hockey games and Heisman Trophy presentations. People even look down at their PDAs while they drive. Who needs a moon roof on a clear summer night when I can play Tetris on I-95 while I soar through the E-ZPASS lane?

This is my gigantic preamble to why you should one day sign up your young son or daughter to play youth hockey at a local rink near you. If nothing else, it gets them away from electronics and teaches them a small slice of humanity that they can take forward through life, a life with more heart and less battery power. The rink's cold robs electronics of their battery power and signal reception, anyway.

So, if you are a first-time hockey parent, or dream of one day spending more than $10,000 and sacrificing weekends for a decade of glamorous youth or "minor" hockey, here are 13 important things you need to know about the youth hockey universe -- and hockey in general -- to help speed up the assimilation process in joining the "Congregation of Independent Insane in the Membrane Hockey Community Union" or COIIITMHCU. If you move those letters around you eventually get Chicoutimi. A miracle from the star-filled heavens above. (I'm sure my fellow COIIITMHCU members will offer even more, and we can post next week.)

1. Under no circumstances will hockey practice ever be cancelled. Ever. Even on days when school is cancelled, practice is still on. A game may be cancelled due to inclement weather because of travel concerns for the visiting team, but it would have to rain razor blades and bocce balls to cancel hockey practice at your local rink. It's good karma to respect the game.

2. Hockey is an emotional game and your child has the attention span of a chipmunk on NyQuil. The hockey coach will yell a bit during practice; he might even yell at your precious little Sparky. As long as there is teaching involved and not humiliation, it will be good for your child to be taught the right way, with emphasis.

3. Hockey is a very, very, very, very difficult game to play. You are probably terrible at it. It takes high skill and lots of courage, so lay off your kid. Don't berate them. Be patient and encourage them to play. Some kids need more time to learn how to ride the bike, but, in the end, everyone rides a bike about the same way.

Your kids are probably anywhere from age 4-8 when they first take up hockey. They will not get a call from Boston University coach Jack Parker or receive Christmas cards from the Colorado Avalanche's director of scouting. Don't berate them. Demand punctuality and unselfishness for practice and games. That's it. Passion is in someone, or it isn't. One can't implant passion in their child. My primary motive in letting my kids play hockey is exercise, physical fitness and the development of lower-body and core strength that will one day land them on a VH1 reality show that will pay off their student loans or my second mortgage.

4. Actually, I do demand two things from my 10-year-old Squirt, Jackson. Prior to every practice or game, as he turns down AC/DC's "Big Jack," gets out of the car and makes his way to the trunk to haul his hockey bag inside a cold, Connecticut rink, I say, "Jack, be the hardest, most creative and grittiest worker ... and be the one having the most fun." That might be four things, but you know what I mean.

5. Your kids should be dressing themselves and tying their own skates by their second year of Squirt. Jack is 67 pounds with 0 percent body fat and arms of linguini, and he can put on, take off and tie his own skates. If he can, anyone can. I don't go in the locker room anymore. Thank goodness; it stinks in there.

6. Do not fret over penalties not called during games and don't waste long-term heart power screaming at the referees. My observational research reveals the power-play percentage for every Mite hockey game ever played is .0000089 percent; for Squirts, .071 percent. I prefer referees to call zero penalties.

7. Yell like crazy during the game. Say whatever you want. Scream every kind of inane instruction you want to your kids. They can't hear you. In the car ride home, ask them if they had fun and gently promote creativity and competiveness, but only after you take them to Denny's for a Junior Grand Slam breakfast or 7-Eleven for a Slurpee. Having a warm breakfast after an early morning weekend game will become one of your most syrupy sweet memories.

8. Whenever possible, trade in your kids' ice skates and buy used skates, especially during those growing years and even if you can afford to buy new skates every six months. Your kids don't need $180 skates and a $100 stick no matter what your tax bracket is. They will not make them better players.

9. Missing practice (like we stated above) or games is akin to an Irish Catholic missing Mass in 1942. We take attendance at hockey games very seriously. Last week, the Islanders' Brendan Witt was hit by an SUV in Philadelphia. Witt got up off the pavement and walked to Starbucks for a coffee, and then later played against the Flyers that night. Let me repeat that: BRENDAN WITT WAS HIT BY AN SUV ... AND PLAYED THAT NIGHT! Re-read that sentence 56 times a night to your child when they have a case of the sniffles and want to stay home to watch an "iCarly" marathon. By, the way Philadelphia police cited Witt for two minutes in jail for obstruction. Witt will appeal.

10. Teach your kids not to celebrate too much after a goal if your team is winning or losing by a lot. And by all means, tell them celebrate with the team. After they score, tell them not to skate away from their teammates like soccer players. Find the person who passed you the puck and tell him or her, "Great pass." We have immediate group hugs in hockey following a short, instinctive reaction from the goal scorer. I am proud of my boy for a lot of things, but I am most proud at how excited he gets when a teammate scores a goal. He is Alex Ovechkin in this regard.

11. There is no such thing as running up the score in hockey. This is understood at every level. It's very difficult to score goals and unexplainably exhilarating when one does. Now, if we get to 14-1, we may want to take our foot off the gas a tad.

12. Unless their femur is broken in 16 places, Mites or Squirts should not lie on the ice after a fall on the ice or against the boards. Attempt to get up as quickly as one can and slowly skate to the bench.

13. Do not offer cash for goals. This has no upside. Passion and love and drive cannot be taught or bought. I do believe a certain measure of toughness and grit can be slowly encouraged and eventually taught. Encourage your kid to block shots and to battle hard in the corners. It will serve them well in life.

Enjoy the rink. Keep it fun, keep it in perspective and enjoy the madness. In this digital world of electronics, you may find hockey to be the most human endeavor you partake in. Cell phones run on batteries. Hockey players run on blood. Blood is warmer. Welcome.

As they slowly get healthy and acclimated, the Hawks are congealing into the NHL's best team. Marian Hossa looks outstanding and had a top 10 goal of the season Sunday night against Tampa Bay. The Hawks even have two solid goalies going right now.

The Penguins are just kind of cruising along. Coach Dan Bylsma is like a jockey that is trying to pace his horses. Evgeni Malkin has yet to floor the gas pedal. Nothing like a home-and-home with the Flyers to get the Penguins interested again.

No one has scored more goals than the Caps. At times, they look like an unbeatable machine; other times, they look like the Denver Nuggets on skates. GM George McPhee and his staff have to look at their roster and ask themselves, "Do we have enough two-way playoff players to win the Stanley Cup?"

I originally had San Jose in this spot and then asked myself the point of this Power 5, "Who would I take in a seven-game series?" Calgary is showing a little more grit and defense right now. It looks like the veteran Sharks collectively relaxed in their past few games.

It's amazing how similar the Flames and Devils are in terms of their numbers. Both have extremely good coaches who run a tight ship. As long as these teams are healthy, they will play close, competitive games. The Devils have a deeper offensive team, while the Flames have a deeper and more rugged defensive group.

It's back. You know how it works: We present an NHL photo, and Bucci provides a caption. E-mail him your suggestions (include your name and hometown/state), and we will use the best ones and provide a new photo the following week. 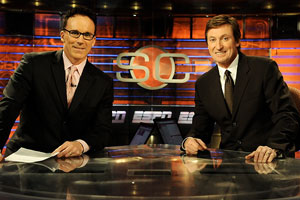 "John, that red light on top of the camera? Did I score again?
Erik Rabe (Steamboat Springs, Colo.) 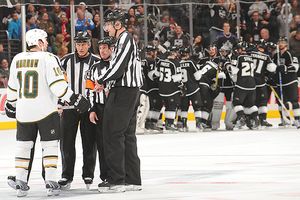 Getty Images
"I'm thinking they had too many men on the ice for that last goal, boys."