Canceling out the 'Crosby is overrated' debate

What would you do if you were commissioner to capitalize on the great hockey exposure that the Olympics has generated? In the past, the NHL has been accused of doing a less than stellar job of keeping up momentum after great exposure (think 1994 after the Rangers or 2002 after Salt Lake City). Is there anything that can be done by the NHL keep the audience/media attention it has newly acquired?

What do we want NHL commissioner Gary Bettman to do? Buy a few billboards? The NBA didn't market Michael Jordan; Nike did. The NFL doesn't market Peyton Manning as much as his agent and advertisers do. ESPN and "SportsCenter" also are an advertising tool. Now, you can argue the choice of television partners is important and part of the overall strategy, but it's hard to manufacture fan bases.

Commissioners are primarily CBA negotiators, TV rights speculators, and rules and discipline deciders. After that, they control little and can't dictate tastes. Fans do that.

Athletes and their agents control so much of the sporting landscape. And let's face it -- most hockey players just don't have that desire to be popular. They understand there are things way more important than that. It is what makes them so appealing to us as hockey fans.

Plus, I don't know how growing the game benefits us as hockey fans. What are the benefits? More difficulty in buying tickets? More expensive seats? You can get every game on TV for a reasonable price. There are plenty of high-quality hockey Web sites with news and views.

There has never been a better time to be a hockey fan.

I work full time and go to school three nights a week, so I'm a pretty busy guy. As one of the only hockey die-hards in my group of friends, it really pained me to decline an invitation to watch the gold-medal game at the bar with my buddies, but I have three exams and much studying to do.

I reluctantly trekked up to the local Starbucks and hit the books. I picked up the WGN radio feed on the internet, so I could listen on my headphones while I studied. It was such an incredible game, and when Zach Parise scored his goal, I lost it and burst out with a loud, "YES!" I jumped out of my seat and raised both fists victoriously over my head.

I snapped out of my temporary trance and remember I was at a coffee shop on a Sunday afternoon. The handful of people in the place were all looking at me like I was completely insane. I tried to explain, but no one really got it. You know how the rest of the game went, but I thought if anyone would appreciate this story, it would be you.

I had a similar reaction when Parise scored. I was watching with my kids and yelled "Parise!" even before Mike Emrick did. That was the quintessential Parise goal -- quick, explosive, athletic and lateral. You could feel it happening as he pounced along the crease.

I'm not going to pull any punches here and I know I'm not alone. I detest Sidney Crosby. I think he's as overrated as they come in any sport. He is an excellent play-making center who can put the puck in the net. When it's all said and done, are his numbers going to be that different from, say, a Dale Hawerchuk? Granted, Hawerchuk was a fantastic player, but, like Crosby, he's no Gretzky. He simply isn't that dynamic.

Given this, I find it so incredible that, in the wake of Canada's victory, it is Crosby who is being hailed as a hero for a game-winning tap-in. Did everybody miss Jarome Iginla's spectacular pass to set up a simple finish? I know he was barely visible and on his back-side when he made it, but that should have only contributed to his glory, not made it less likely for true fans to recognize what a glorious play he made.

Canadian hockey fans are savvy. They've had a long time to embrace Iginla. There's nothing Crosby does that should make him a darling; he's all numbers and no intangibles. Iginla is all class, with intangibles and numbers to boot.

So, why this obsession with Crosby? If I'm starting a team today, and they are of the same age, I take Iginla any day of the week over Crosby. Canada probably wins this tournament without Crosby. They surely lose it without Iginla.

What a great Olympics. The only truly depressing part is who scored the tournament-winning goal. I would have rather any other Canadian tally that overtime goal. I don't understand my dislike (hatred is a little much) for Crosby. I respect his talent, but he just seems like a whining little baby on the ice. From getting upset in the faceoff circle to constantly complaining about "non-calls," I have never seen a superstar with such a poor demeanor on the ice. And don't even get me started about diving. Am I wrong? It seems like the face of the NHL has a terrible image problem.

I watch parts of just about every NHL game. I don't watch "Lost" or "Dancing with the Stars" or "Idol." I watch NHL hockey every night I'm home. These are my observations:

1. Crosby rarely whines. In fact, he is one of the more subdued players in the NHL. That is a fact. If you believe otherwise, you haven't seen a large sample of his games this season.

2. To call him overrated is as implausibly mind-boggling as calling Lady Gaga underrated. He wins faceoffs, he scores goals, he is the best passer in the NHL, he backchecks, he's completely committed to his craft, he carries his franchise's media load and has since he was 18. No one has had more asked of him over the past five years than Crosby.

I have a difficult time detesting anything in life except Michael Bolton covering Otis Redding songs. That's it.

So I'm reading all of these stories and seeing Bettman interviewed about the NHL's involvement in the 2014 Sochi Olympics. He's said there is no rush. There isn't, but do you think he might be waiting for something? Perhaps negotiations for the new CBA after the current one expires after next season?

Don't get me wrong. I love the Olympics with NHL players. It's taking the All-Star Game and giving it intensity. But the Games would still be a blast to watch with amateur players.

The Olympics are about the best athletes in the world competing for medals. And big-time personalities. Relax, everyone. You too, Alex Ovechkin. NHL players will be in Russia.

I live in Watertown, N.Y., which is 45 miles south of the Canadian border. On Feb. 22, 1980, I left work at 4:45 so I could get home to watch the U.S. vs. USSR hockey game live on CKWS Channel 11. CKWS is the CBC affiliate in Kingston, Ontario. Canadian TV always broadcasts Olympic events live.

Every time anyone on your networks refers to the "Miracle on Ice" game, they always mention no one in the States watched it live, when in fact that is not true. The CBC is available all across the extreme northern U.S., and so many of us had the rare opportunity to see the game live. I then watched it again on ABC at 8 p.m. I guess I wanted to make sure what I saw earlier actually happened!

Something's been bugging me, and I'd like to hear your word. As you know, in the Canada-Russia game, Alexander Semin hit Dan Boyle, and then Boyle responded by performing a judo-style takedown from behind. In your opinion:

1. Was Semin's initial hit clean or dirty? Why?

2. The play resulted in offsetting minor penalties. How would you have called it?

3. Should the play have led to a suspension for either player? Why or why not?

1. I thought Semin's hit was perfectly legal. Shoulder on shoulder. No part of Boyle's head hit anything, Semin or the boards.

2. I would have given Boyle a five-minute major for something and a game misconduct. He would have torn Semin's ACL with his move.

3. Certainly not Semin. Had Boyle torn Semin's ACL, I'm guessing Boyle would have been suspended.

You give me a banjo and some relatives and I'm in.

A buddy and I have been talking about a trip for several years to see some games in classic arenas and I think we're finally going to pull the trigger next year. We'd like your input.

We're thinking of a trip where we see a game in New York, Boston and Philly, all within the span of a few days. Sort of a hockey pilgrimage for some Minnesota-bred hockey players who miss the old Met Center. We'd love to do Toronto, too, but that may not happen. We haven't thought out the logistics at all, any suggestions or thoughts? Two other quick questions: 1. Should I buy and wear an old Willie Plett jersey to the games or will I get murdered? 2. Wanna join us?

I once saw a Penguins-Thrashers game in Atlanta 2002 and Willie Plett was in attendance. You would not have been murdered that night, just had your face punched by a 46-year-old man.

As an example, this year you could fly from Humphrey Airport in Minnesota to Boston on Thursday April 8 and see the Bruins play the Sabres. Get in your rental car and drive to New York the next morning. The Rangers are home against the Flyers on April 9. Go out after the game and don't go to sleep before 5 a.m. Wake up at 2 p.m., eat a giant breakfast at Denny's and go see the Devils host the Islanders in Newark. After the game, drive to Philadelphia. Get up on Sunday and see the Flyers host the Rangers at 3 p.m. Drop off your rental car (you can drop off your rental car at a different airport from where you picked it up) and fly back to Minnesota on Sunday night.

It wouldn't be difficult to find something like that next season.

After seeing Peter Bondra as the Slovak GM, it made me wonder, this guy has to be a Hall of Famer right? I vividly remember him as one of the best pure scorers of the '90s.

As I've said before, Peter Bondra was scoring goals when no one was scoring goals in the late '90s. Bondra had 52 of the Capitals' 219 goals during the 1997-98 season. That's almost 25 percent of the team's goals. If Wayne Gretzky had scored 25 percent of the Oilers' goals in 1981-82, he would have finished with 104. That's what kind of season Bondra had. The second full season after the 1994-95 partial lockout is when the NHL got very defensive.

The NHL's golden era for offense was 1970-96. If you played a bulk of your career during this era, and especially with Bobby Orr, Gretzky or Mario Lemieux, your numbers were skewed. Good news for offensive players, bad news for some goalies. If Frank Brimsek played in that era instead of 1938-50, he would have been "Mr. 3.45" instead of "Mr. Zero." And he would have been Don Beaupre. 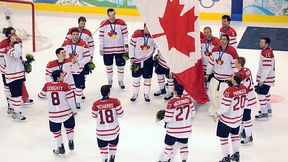 Want to relive the magic of the gold-medal game between the United States and Canada? We peek into our man's diary for his look at Olympic history. Blogumn