@ESPN_Burnside: As the Vancouver Canucks work their way through some early-season ups and downs, it would be easy to assume that netminder Ryan Miller -- signed to a three-year, $18 million deal in the offseason -- might also be working out some kinks in his new surroundings. Not so. Whether or not the former Vezina Trophy winner's play is going somewhat under the radar, he is a key component to the early success the Canucks have enjoyed. He turned aside 20 of 22 shots in Vancouver's 4-2 victory over the Washington Capitals on Sunday to run his season record to an impressive 5-1. In the five victories, Miller has allowed just nine goals. For a Canucks team that underwent a significant offseason overhaul and that's been no stranger to goaltending angst the past two or three years, Miller's play is a key to getting back into the playoff discussion in the Western Conference.

@Real_ESPNLeBrun: Scotty, I would argue that the most important factor in whether the Canucks make the playoffs this season is getting consistent secondary scoring behind the Sedin twins. On Sunday night, the second line of Nick Bonino, Chris Higgins and Alex Burrows produced a pair of goals in a 25-second span in the second period that proved to be the difference, just as the line's two goals in St. Louis on Thursday night were the difference in that victory. With Ryan Kesler gone, the ability of the Bonino line to be a nightly factor will be paramount for the Canucks. None of the three players is particularly fast, so the line must have great cohesion as a unit to make up for that. On Sunday night they were the difference. Can they do it all year?

@CraigCustance: It was a slightly less than traditional path to the NHL for goalie Scott Darling. It started with a stint with the North Iowa Outlaws. Then it went like this: Capital District Selects (EJHL), Indiana Ice (USHL), University of Maine, Louisiana IceGators (SPHL), Mississippi RiverKings (SPHL), Florida Everblades (ECHL), Wichita Thunder (CHL), Wheeling Nailers (ECHL), Hamilton Bulldogs (AHL), Milwaukee Admirals (AHL), Cincinnati Cyclones (ECHL), Rockford IceHogs (AHL) and, on Sunday night, the Chicago Blackhawks. The Illinois native won his NHL debut as the Blackhawks continue to find ways to win without injured starter Corey Crawford, this time beating the Ottawa Senators 2-1 as Darling stopped 32 of 33 shots. These stories of persistence are one of the many things that make hockey great, and maybe at 25 years old Darling has finally found an organization to call home.

@KatieStrangESPN: Sunday night's game between the San Jose Sharks and Anaheim Ducks featured just about everything one would expect in a Pacific Division matchup: size, skill and plenty of nastiness. The Sharks came out on the winning end of the grudge match, combining terrific goaltending (Antti Niemi made 33 saves), balanced scoring and grit to snap the Ducks' seven-game winning streak. It was an important win for the Sharks, considering the team's 2-1 loss to the lowly Buffalo Sabres at home just one night prior. Meanwhile, Bruce Boudreau and Anaheim got a needed reminder about the quality of competition among the top teams in the Western Conference. It was a timely lesson, too, as the Ducks ready themselves for a four-game road trip that includes stops in Chicago, St. Louis, Dallas and Colorado. 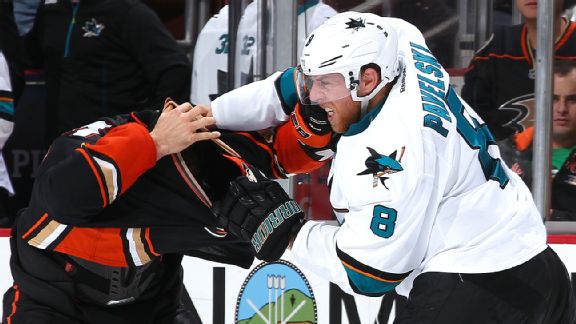 "If we can all contribute and get three or four goals a night like we have been, usually we're going to win games."
-- Canucks C Nick Bonino on the win over the Capitals

"Our line's working pretty well right now. We're getting chances at the net and things are happening for us. You've got to ride it when you can."
-- Kings LW Tanner Pearson on the win over the Blue Jackets

So happy that @team_niko_inc made it out for the game tonight. It was great seeing smiles from everyone. #TEAMNIKO pic.twitter.com/qYgtuaRurC