Even in defeat, Hossa has no regrets 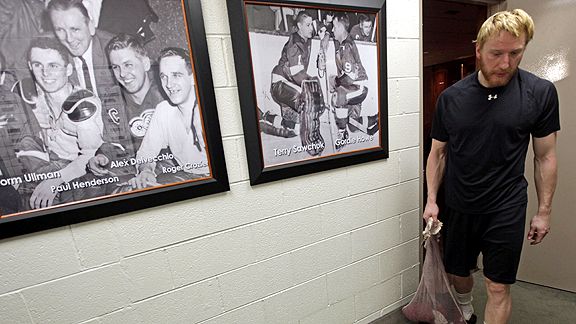 AP Photo/Paul Sancya Hossa gave up a lucrative offer from the Pens to join the Wings this past offseason.

DETROIT -- You'll find few nicer guys in the NHL than Marian Hossa. He's a polite chap, a soft-spoken Slovak liked a great deal by most every teammate he's ever had.

But 11 months ago, he slapped the Pittsburgh Penguins in the face, whether he meant to or not, when he turned his back on a five-year, $35 million deal and stunned the hockey world by signing a one-year, $7.45 million deal with Detroit.

One Penguins fan answered that question Friday night when she e-mailed a photo to Pittsburgh Tribune-Review beat writer Rob Rossi of her wearing a Pens jersey with Hossa's old No. 18 with the name "BADCHOICE."

A subdued Hossa came out to meet the media Friday night, just like he has every day during this series, and he answered the same question over and over and over again. He dreamed of winning a Cup in Detroit. Instead, the nightmare scenario became reality for him after the Penguins sealed their win in Game 7.

"That's life, sometimes you make choices," Hossa said. "I still had a great year in this organization. Great guys, great people around. It could go both ways, just one goal makes a difference. You score one more and you celebrate. Sometimes, that's life and you just have to move on. It's a great life experience."

He admitted the pressure of the situation may have got to him. He was scoreless in the seven-game Cup finals series.

"Whether you like it or not, there's lots of pressure," Hossa said. "You learn when the pressure is on and you learn how to handle it. It's squeezing you. It's a pretty tough one. I tried to battle hard, but I couldn't get anything done offensively. ...

Perhaps Penguins fans should be thanking Hossa. After all, if he stayed, perhaps the team doesn't have such a hard time. Perhaps there's no coaching change. Perhaps Bill Guerin and Chris Kunitz aren't acquired at the trade deadline.

Penguins blueliner Brooks Orpik said some of his teammates might have felt different, but he didn't begrudge Hossa his decision.

"I have nothing but respect for the guy," Orpik said. "I don't feel bad for him, but he was in a difficult situation."