WASHINGTON -- Rangers coach John Tortorella threw a plastic drinking bottle over the glass and into the stands during a confrontation with a fan in the third period of New York's 4-0 loss to the Washington Capitals on Friday night, according to multiple media reports.

Tortorella and a man standing behind the Rangers' bench were seen yelling at each other with about 13½ minutes left in the game. After Tortorella heaved the green plastic bottle, he grabbed Aaron Voros' hockey stick and held it high, waving it in the fan's direction before assistant coach Jim Schoenfeld stepped in to calm him.

A TV replay of the episode did not show whether anything was thrown at Tortorella, but there were reports a cup of liquid was tossed over the bench at him, and he was seen using a towel to wipe off his suit.

League disciplinarian Colin Campbell had no comment when reached by ESPN.com on Saturday.

When asked by ESPN.com if the team would be issuing a statement regarding Tortorella, a Rangers spokesman e-mailed: "No."

"Good job by our fans. Our fans are one more player for us. They do what they have to do for us," Capitals star Alex Ovechkin said Saturday morning at the team's practice. "They scream and they're loud. Maybe it was too much to [throw] beer or water or whatever. But sometimes that happens. And maybe that's going to happen tomorrow against us, too. You never know." 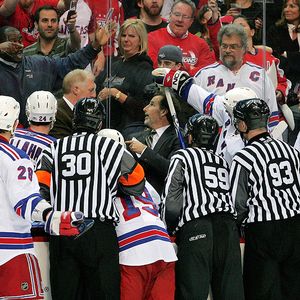 The Rangers surged to a 12-7-2 regular season finish and into the playoffs after Tortorella, who led the Tampa Bay Lightning to the 2004 Stanley Cup, took over for the fired Tom Renney on Feb. 23.

Information from ESPN.com's Pierre LeBrun and The Associated Press was used in this report.