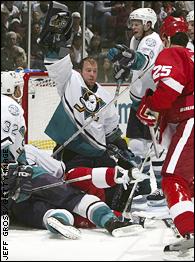 Sergei Fedorov sat slumped forward in front of his locker as if lifting his head would force him to face the reality of the Wings' fate.

"It's hard to say we played good when we lost," Fedorov said. "We obviously didn't play good enough."

Darren McCarty just stared at the ceiling, seeking his answers there after the Wings' overtime defeat and four-game sweep at the hands of the Mighty Ducks.

"The chances, the breaks we didn't get -- a timely goal, a lucky bounce," McCarty said. "They got that. They got it done. They found a way. They're going on in the playoffs.

"We played well in this series but not well enough."

As it turned out, the defending Stanley Cup champions played just well enough to lose four one-goal games. It was the first time since 1999 a team had been swept in a four-game series featuring four blade-thin decisions.

The Red Wings went into Game 4 hoping to make history by becoming just the third team in NHL playoff history to rebound from a 3-0 deficit in a best-of-seven series to win the series. Head coach Dave Lewis, a player on one of those comeback teams -- the 1975 New York Islanders, had even spoken of that experience in a team meeting with the Wings before Game 4.

Instead, the Red Wings made history of another kind, becoming the first defending Stanley Cup champion swept out in four games of the first round of the playoffs since the 1952 Toronto Maple Leafs.

"It really feels like you accomplished nothing," Wings captain Steve Yzerman said.

"When you go into a playoff series, you picture a victory. You don't picture a defeat and you definitely never picture a sweep," Lewis said. "Whatever could go wrong for us did.

"I feel empty. Numb, I guess, would be a good word. Really can't believe it."

Defenseman Mathieu Schneider, obtained at the trade-deadline to arm the Wings for their latest Cup run, was even more succinct.

"It's like a nightmare," Schneider said. "It was a very frustrating series for us. We pounded a lot of shots at them. We beat them everywhere but on the scoreboard."

Haunting the Wings' fitful nights for some time to come will be Mighty Ducks goaltender Jean-Sebastien Giguere. The 26-year-old Giguere had no playoff experience when this series began and was asked to make his debut against the NHL's highest-scoring team during the 2002-03 season, a team with a Hall of Fame roster featuring four players with at least 500 career goals.

But Giguere was brilliant, denying the Wings time and time again and carrying the Ducks to one of the most stunning playoff upsets in NHL history.

It only seemed like so many. Detroit did outshoot the Ducks 171-120 in the series but got just six pucks past Giguere whose .964 save percentage in the series seems ridiculous.

"Their goaltender was superb," Lewis said. "Their team played very hard but one guy was the difference."

In their repeated Cup quests over the past several seasons, the Red Wings have seen the best goaltenders the game has to offer -- and beaten them. They never found a way to "slay the dragon," as Lewis termed the challenge of beating Giguere.

"I think Patrick Roy did a little bit of it. Eddie Belfour did it. Quite a few goaltenders have played well against us," Fedorov said when asked for comparisons. "Most of them, we would be able to find a way. Maybe after the first game. Maybe after the second game. But the way that team was playing, not just the goalie ... it was hard to break through.

"I'm not shocked. I'm just very disappointed. We should have scored more goals. You cannot win a series scoring only one or two goals a game. ... I don't feel good at all right now."

That pain will linger in Hockeytown where an unsettled summer will start very early. Issues now will be raised about how much owner Mike Ilitch got for his approximately $70 million payroll (second-highest in the NHL) and how much he will be willing to pay to keep this team intact. After another first-round exit at the hands of an underdog team from Southern California (the Los Angeles Kings in 2001), the Red Wings responded by reloading, adding free agents Brett Hull, Luc Robitaille and Dominik Hasek.

This time, the questions are largely in house, where Fedorov, McCarty and Robitaille are among the players unsigned for next season and Yzerman's possible retirement looms after a painful recovery from knee surgery ended in a truncated playoff run.

Fedorov, meanwhile, said before Game 4 that he hoped his time in a Red Wings uniform was not coming to an end. But he was meanderingly philosophical in his response to questions about his future after the Game 4 defeat.

"I was 20 years old when I came here. ... I got lucky. It was a quite remarkable time to play for the Detroit Red Wings organization," Fedorov said. "I'm not saying I won't (play for them) again.

"They treat me like their own family. To me, that was the most important thing and that's why I was able to be as successful as I was."

Bill Plunkett is a sports writer for the Orange County Register.