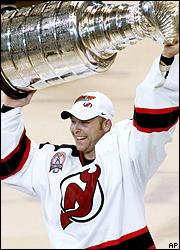 The upcoming playoffs get everyone so excited, from commissioner Gary Bettman and players association chieftain Bob Goodenow on down, on both sides of the bargaining table, that the pressure builds -- to get the collective bargaining issue settled.

That could involve scheduling a secret marathon meeting at the Billy Goat Tavern in Chicago, meaning Bettman, Goodenow and their underlings could be secure in the knowledge that they wouldn't be recognized in an NHL city.

Or they could meet in New York or Toronto, for that matter, with media hordes camped out in front of the buildings.

Regardless, wouldn't it be great if this collective bargaining agreement mess gets settled, forestalling a work stoppage, and it happens soon enough to allow the World Cup to become a celebration of the sport, not a somber prelude to the shutdown?

We only can hope that the way the first-round matchups fell into place turns out to be portentous of a great postseason -- and that, if this indeed turns out to be the case, it truly matters.

It would have been difficult for the NHL to gerrymander the matchups any better than the way they turned out.

In the East, especially.

Start with the battle of Ontario, with the mayor of Ottawa presumably preparing to patrol the Corel Centre concourses and censure anyone wearing Maple Leafs jerseys; the Bruins-Canadiens reprising a deep-rooted, Original Six matchup; the Flyers-Devils rivalry, which always is interesting because so many Flyers fans come up the New Jersey Turnpike; and even the Islanders posing the relatively easy first question in the on-going testing of the Lightning as legitimate Stanley Cup contenders.

Even in the West, having Nashville in the postseason can provide a shot in the arm for the NHL as it continues to dismiss the need for and the possibility of contraction. Even if the Wings sweep, the Nashville guitars won't be sounding mournful choruses. The Predators and their fans are just thrilled to be there. And the other first-round series, including a replay of the back-to-back Western Conference finals matchup from 1999 and 2000 (Dallas-Colorado) and the other Canadian series between Vancouver and Calgary, make for great drama.

Here's how the whole thing could play out best for the NHL.