BUFFALO, N.Y. -- If the NHL is a sporting nation made up of 30 communities, Buffalo is the curious, maybe even mystical, place that's not really on any maps and only gets discovered by travelers who get lost in a blinding snowstorm or fall down a rabbit hole.

In the movie version, visitors arrive in the Sabres' dressing room and look around, waiting for a familiar face to appear, a Brendan Shanahan or a Peter Forsberg or even a Bobby Holik. Instead, all they see are players who look as though they might be the maintenance guys at the HSBC Arena or the cable guy or the pizza delivery guy.

Figure Coppola or Stone to do the flick.

Meanwhile, on Tuesday, about 15 hours after the Sabres had stunned the Ottawa Senators 2-1 to take a 2-0 series lead in their Eastern Conference semifinal, the Sabres gathered for an optional practice. While reporters crowded outside the dressing room, a young man with closely cropped blond hair and clad in jeans walked past.

Who is that? Shoulders shrugged.

Further investigation revealed it was defenseman Toni Lydman, not the wi-fi guy.

Lydman, a member of Finland's silver medal team at the Torino Olympics, was acquired from Calgary in August for a third-round pick. He has three assists, plays almost 22 minutes a night and is a plus-9 in the playoffs.

Oh, well, maybe we'll talk to him tomorrow. Now that we know who he is. 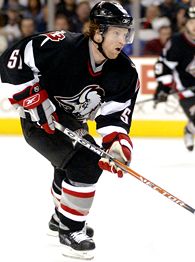 "There's a lot of good hockey players in this room. Nobody wants to give that to us, I guess. It's been like that all year," defenseman Brian Campbell explained. "  People just have to figure that out, I guess."

Campbell might well be the president of the Sabres' chapter of AA, Anonymous Anonymous. A native of Strathroy, Ontario, Campbell, 26, was the 156th pick in the 1997 entry draft. Leading up to this season, he had played 167 NHL games, scoring nine times and adding 32 assists.
This season, Campbell scored 12 goals and had 32 assists for 44 points.

Where did that come from?

In the playoffs, Campbell has added three more assists while averaging 19:34 a night in ice time. He also delivered what many observers are calling the most devastating hit in years, leveling Philadelphia forward R.J. Umberger in the first round.

And you can bet that when Umberger was finally able to speak, the first thing he asked was, "Who was that guy?"

NHL teams -- with a nod to that iconic image of Paul Newman and Robert Redford in "Butch Cassidy and the Sundance Kid" -- have been looking over their collective shoulders all year, asking the same thing: "Who are these guys?"

"I don't know if [we're] underestimated. I just don't think many teams quite figured us out for the whole year," coach Lindy Ruff offered. "Everybody looked for us to kind of falter when we lost [Ryan] Miller and then when we lost [Daniel] Briere and we lost [J.P.] Dumont and then we lost [Tim] Connolly. We had a lot of young guys in the lineup. It was a tough lineup to figure out."

During the season, the Sabres lost 237 man-games to injury; 25 players recorded at least one point. Has it been difficult keeping everyone straight?

"It's a lot easier to memorize them one guy at a time," offered netminder Martin Biron, who has been with the team through bankruptcies and nonplayoff years when anonymity came perilously close to plain old nonexistence.

Jason Pominville, for instance, started the season playing for the Sabres' AHL affiliate in Rochester, living for a time with center Derek Roy. Now, the two are sharing a house Roy bought in Buffalo after both were called up for good midway through the season.

After chipping in 18 goals and 30 points in 57 regular-season games, the native of Repentigny, Quebec, has added four more goals and six points in the playoffs, including a hat trick against the Flyers.

"You've got to pinch yourself once in a while," Pominville said.

If there is a dreamlike quality to the Sabres and their season heading into Game 3 against the Senators on Wednesday night, it is a dream built on the sticks and stones and mortar of preparation.

During the lockout, Ruff spent a lot of time in Rochester with his coaching staff watching the AHL Americans. He watched and wondered about which players would fit in, not just with his team but in the new NHL. If the rest of the NHL was taken by surprise by the faceless bunch from the Queen City, Ruff wasn't.

"I think a lot of people looked around and would often say at the end of the week, 'How the heck did they just win three games in a row? What are they doing?'" Ruff said. "But we had a lot of young players that stepped in in the absence of some key players. I think that depth allowed us to have a very good year that maybe went unnoticed because there wasn't any bright light shining on any certain name. It's been a team concept. It isn't one line or one player."

The Sabres likely will have to contend with more of the same starting Wednesday.

Although Ruff said there was still a chance Connolly could play, it would seem a minor miracle given the crushing hit he took from Ottawa's Peter Schaefer just 58 seconds into Game 2.

Connolly, another member of the "Do I know you?" brigade, has been terrific all year after he was on the bubble to make the team out of training camp. His 11 postseason points were tied for the team lead and one point off the league lead.

Buffalo also might be without defenseman Dmitri Kalinin, who suffered a leg injury in Game 2. But this sort of revolving injury door is nothing new to the Sabres.

"Without those guys stepping up and playing like they did as rookies and as they're doing as rookies, we're probably not in this position," he said.

And maybe that's the thing.

The Sabres aren't doing this in spite of being an anonymous group void of big-name stars. They're doing it because that is who they are.

If this team were built differently -- if there were more veterans, more high-priced, high-profile free agents -- could Ruff have done the same thing?

"That's a tough question. You would hope so," Ruff said.

Maybe, but not likely.

And so the Sabres, whoever they are, go on about their business.

Can't wait to see the movie. Hope they get some stars to play the players.

Sabres coach Ruff is wearing rubber bracelets on his left wrist that were sold to him by local students, including his own children, to help raise money for a creative teamwork competition being held in Knoxville, Tenn.

"It's like the Olympics of the mind," Ruff said. "I was told if I purchased these and wore them, the blue and gold and black and red, it would bring us good luck. I've worn them for two games. They seem to work. I would like to see the media wear them."

Asked whether wearing the bracelets would enable reporters to determine whether Connolly would be able to play Wednesday night, Ruff said it might.

"You know what? If you have these on tomorrow, you've got a shot at it," the coach quipped.