With maybe a "J" thrown in for good measure, as in "J" for justice.

For if there was anything about the Oilers' 4-3 overtime win Wednesday that kept them alive in this Stanley Cup finals series, it was that it was a just outcome. 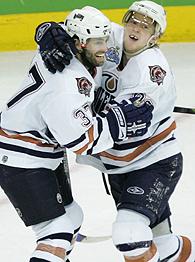 With the Stanley Cup in the building and the Carolina Hurricanes fairly seething with confidence, many expected the plucky Oilers to take a knee. No shame in that after their remarkable playoff run. Instead, they delivered an inspiring performance that has changed the tone and tenor of this series.

"We heard all that. We keep hearing it. We've been counted out before. We don't mind that. The belief system's in our room. We're strong in that department," said defenseman Steve Staios. "There's no doubt that we feel we're a team that should win the Stanley Cup. As we're elevating our game, we feel our chances are getting better and better."

If ever there was a man who carried the weight of Oiler Nation on his shoulder late Wednesday evening, it was Staios. The veteran defenseman was sitting in the penalty box, having been whistled for tripping Mark Recchi 3:03 into overtime. Then, Fernando Pisani blocked a Cory Stillman pass just inside the Carolina blue line and raced in alone, ripping a shot past Cam Ward just 28 seconds into the power play.

It was the first shorthanded, overtime game-winning goal in Stanley Cup finals history and Staios was happy to have played his small part in making history.

"I felt like I got a raw deal on the call," Staios said. "But that's the way the calls have been going this year and Pise bailed me out. I'd say that I'd buy him a big pasta dinner, but there's probably 100,000 people in Edmonton, the Italians back there, waiting to have him over."

Earlier in this playoff season, Philadelphia coach Ken Hitchcock said he thought a coach learns the most about his team once a playoff series hits Game 5. That's when teams seize the moment or crumble under the weight of trying. That's when character is revealed -- or not. That is when a team's commitment to a system and commitment to winning is revealed.

Wednesday night in Raleigh represented no less than a titanic struggle pitting one team with glory in its grasp against another team desperate not to give in to history.

"We wanted to make sure that they weren't having a parade in front of us today," said defenseman Chris Pronger, who helped set the tone when his blue-line blast was redirected by Pisani for a 1-0 Edmonton lead just 16 seconds into the game.

When it was all over some three hours later, lines of demarcation had been clearly established as the series shifts back to Edmonton for Game 6 on Saturday.

Their ability to close out the Oilers will depend largely on their ability to induce Edmonton players to take penalties and then make them pay for their transgressions.

On the Oilers' side of the ledger, Game 5 clearly established them as the masters of the 5-on-5 game. Two of their four goals came with teams at full strength and their team play was so strong all night that after the midpoint of the second period, they took only one penalty, the Staios penalty that set the stage for Pisani's winner.

"Five-on-five, we controlled the pace of play. Came out in the overtime and really took it to them," said Michael Peca, who played his best game of the series. "We knew their mentality was to try and come out and end this thing early. They have a lot of tired bodies on the blue line, a lot of guys that aren't feeling great. We wanted to flip the tables on them and come and try and end it early ourselves."

On Saturday in Edmonton, the Oilers will hope to press that advantage. The better they play 5-on-5, the more time is spent in the Hurricanes' zone. In theory, the Oilers are less likely to take penalties which, in turn, puts more pressure on the Hurricanes to produce at full strength. It's called a vicious circle.

"We feel like we can take it to them 5-on-5. We feel that we're gaining momentum," Staios added.

If there is one thing the Canes have shown this spring, it is a remarkable ability to put behind them disappointment.

They failed in their first attempt to put away the Buffalo Sabres in Game 6 of the Eastern Conference finals, but came from behind in the third period of Game 7 to earn a trip to the finals.

"I am sure they are pretty upset," Carolina coach Peter Laviolette said. "Everybody is upset. But, you know, we'll wake up [Thursday], go back to work. It's one game."

The difference between then and now is that the Sabres were dropping like flies as the series progressed. By Game 7, the Sabres were missing four regular defenders. Not so the Oilers, who seem, if it's possible playing game No. 104 of the season, to be getting stronger, more confident.

"If we can tighten up our [penalty kill], we do feel like we play four lines and we've got a lot more energy than they do now. Especially with the rest that we had we feel like we're getting our legs now," said Edmonton center Shawn Horcoff.

Indeed, it is the Hurricanes who are now showing signs of wear and tear.

Defenseman Aaron Ward is hobbling, having left the game in the second period with an "upper body injury" only to return and take a hard shot to the ankle. Veteran forward Doug Weight seemed to be suffering from a left arm or shoulder injury after he was sandwiched by two Edmonton players on his first shift of the third period. He returned to the bench, but did not play again.

"It hurts right now. It's tough to swallow. You want to finish teams off when you can," said Carolina forward Kevyn Adams.

Not that either of these teams need to be reminded of that. Not after Game 5.