EDMONTON, Alberta -- And so the "Carolina Hurricanes as carbon monoxide" theory gives way to "sorry, out of gas."

In absolutely dominating fashion, the Edmonton Oilers wrote themselves to the brink of the NHL history books with a 4-0 win in Game 6 that, if the score was truly reflective of the imbalance of play, would have been 24-0. 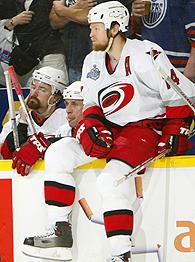 And given the way the once-unflappable Hurricanes imploded Saturday, it will take a dramatic turn of events Monday night in Game 7 in Raleigh to keep the Oilers from writing one of the most dramatic Stanley Cup-winning scripts ever.

"Tonight, it wasn't even a contest. We were outplayed, outmatched, embarrassed. Say it all," veteran Carolina defenseman Glen Wesley said. "Bottom line is we've got to let it go."

So complete was the Oilers' dismantling of the Hurricanes that Carolina's dressing room remained closed to reporters for an extra few minutes while the players held a meeting.

"Yeah, we had a talk. But I'm not going to elaborate on it," Wesley confirmed. "What's in here, stays in here, and you guys don't need to know."

The Oilers are, of course, the first eighth seed to advance to the Stanley Cup finals. They now stand poised to be a team of destiny with a chance to become only the second team to overcome a 3-1 series lead and win the Cup. Only the 1942 Toronto Maple Leafs, who rebounded from a 3-0 deficit, have accomplished the feat.

"Guys in the locker room, we all talk about belief. We all talk about urgency, the will to win and never quitting and keeping positive through the whole situation," said Ryan Smyth, who crushed any hopes of another Carolina comeback with a power-play goal 3:04 into the third period that gave the Oilers a 3-0 lead. "And, you know, it's few and far between to get to a place like this in your career, so we'll obviously make the most of it and we'll do our best to put our names on the Cup."

Now, heading back to Raleigh for a winner-take-all contest, the Oilers have rendered the Canes' attack more like helium.

The Hurricanes were outshot 10-3 in a scoreless first period and did not register their first shot of the second until the 14:11 mark.

By that time, the Oilers had stacked 21 shots at Carolina netminder Cam Ward and were up 2-0 on goals by Fernando Pisani and Raffi Torres.

Little the Hurricanes tried worked, including the miracle insertion of Erik Cole into the lineup for the first time since he suffered a broken neck on March 4.

The NHL's most potent playoff power play suddenly was neutered, going 0-for-6.

The most crucial juncture came late in the second period, when the Oilers were whistled for back-to-back penalties. But in spite of decent Carolina pressure, the Hurricanes could not find the shooting lanes. Included in that power-play action was a moment eerily reminiscent of Game 1, when captain Rod Brind'Amour took advantage of an Edmonton goaltending lapse to tie the game in the last minute. In this case, however, Brind'Amour couldn't control the puck with Edmonton netminder Jussi Markkanen out of position. The chance passed.

"I know I have to be better if we're going to win," Brind'Amour said. "The team relies on me a lot and I haven't done anything in the last two games. The team goes as I go a lot of times, and I'm not doing the job right now. This was not a very typical game from us and they played great."

Even Cam Ward's save of the series, an eye-popping glove stop to deny Radek Dvorak an Oiler 3-on-1 early in the third, could not spark the Hurricanes, who seem beaten down after six games of being mauled by the Oilers. In Game 6, the Oilers out-hit the Hurricanes 23-11 and the physical play is one of the main reasons Carolina appeared to have no legs Saturday night.

"In order to get in the physical side of it, you have to skate," Hurricanes coach Peter Laviolette said, "and we just were really lousy at the skating part of it. We looked tired. Skating has been our trademark the entire year and our legs were not under us tonight."

How dramatic has the turnaround been since the Hurricanes opened up a 3-1 series lead? In Game 6, it was the formerly tepid Oiler power play that looked dominant in going 3-for-9, and it was the Hurricanes who were undisciplined and frustrated. Not only did the Canes take eight minor penalties, they also took two bench penalties for too many men on the ice.

Laviolette has rarely hit a wrong note throughout these playoffs. He swapped Ward and Martin Gerber in and out of the Carolina net during series against Montreal and Buffalo and was rewarded handsomely for his intuition. But one wonders in Game 6 if he overplayed his hand.

Cole was enjoying a breakout year when he was injured and certainly he has been desperate to get back into the lineup since resuming skating almost a month ago. And while Laviolette said he thought Cole was the team's best forward for the first two periods, one wonders in hindsight if it wouldn't have been more prudent to go with reserve forward Chad LaRose, who has suited up for 20 of 24 postseason games, or add a defenseman to the mix in veteran Oleg Tverdovsky to replace the injured Doug Weight.

Of course, perhaps Laviolette imagined just this scenario and that getting Cole some work in Game 6 might lead to more production in Game 7.

"I'm looking forward to being better in Game 7," said Cole, who admitted he didn't feel great in the third period.

The loss marked only the second time this spring the Hurricanes have lost two games in a row. They dropped the first two games of the opening round against Montreal and have been a model of efficiency and resiliency since.

But Saturday's loss seems to disprove Laviolette's belief that momentum is a myth in the playoffs, that each game is a separate entity with little carry-over.

Over the next 48 hours, Laviolette will have to sell his team on the notion that momentum is a playoff bogeyman, something that exists only in their minds, and that it is merely a matter of going home and starting fresh.

"What are the options really? You know what I mean?" Laviolette asked. "There's one game left for the Stanley Cup and it's in our building. No place we would rather be. We won an awful lot of games there this year."

Carolina forward Ray Whitney bristled at the suggestion the team was out of gas.

"No, we're not running out of gas. We didn't waste any of it tonight, so we should have plenty of it for Monday night," Whitney said.

"It's a best-of-seven for a reason. It's not supposed to be easy," he said. "Sometimes if you don't get the job done you hope you have another day. We do. And it's time for us to really play our best game. Game 7 at home, what else can you ask for?"