Love and redemption, sweat and pain, the impossible and the improbable, the heroic and the selfless.

And if you looked closely enough as the euphoric Carolina Hurricanes swarmed onto the RBC Center ice Monday night and took their turns hoisting the mighty silver canister above their heads, you might have seen every one of those million things. 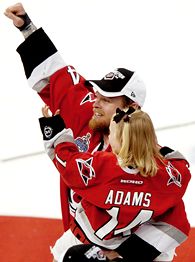 "I had tears in my eyes. It's a thing you just visualize your whole life when you're a kid," said Carolina forward Matt Cullen, who turned in his best performance of this compelling finals series in the Hurricanes' Cup-clinching 3-1 victory.

"I thought a lot about that today. I had some time alone and I thought about it, just visualizing and imagining it happening. You're that close and now we have it," Cullen said in the quiet moments before the champagne corks began to ricochet off the dressing room ceiling.

If a hockey game can be a thing of beauty, then this was such a game.

All frenzied movement and desperate rushes and breathtaking stops.

From the opening moments when Aaron Ward blasted home the first goal of the game ("I just pretended I was aiming at the middle of the backboards," Ward joked after) through the last moments of an electric third period, this was a game to embrace.

Sometimes minutes would pass without a whistle with wild surges at both ends of the ice. Then the play would stop and the frantic pace would begin again. And this, the 25th postseason game for the Hurricanes, the 24th game for the Edmonton Oilers, the final contest in a brutal two-month tournament. A final contest that would not be truly settled until Justin Williams took a pass from Eric Staal and settled the puck into the empty Oilers net to make the score 3-1 with 1:01 left.

"It just feels incredible. I guess being there before a couple of times and just knowing that it just takes every bit of energy and courage you can muster to try and win the Stanley Cup," said Hurricanes defenseman Bret Hedican, who had been to the edge twice, once with Vancouver in 1994 and again four years ago with this Carolina team, when it was defeated in five games by Detroit.

"This year I knew something special was going to happen. I could feel it in training camp," Hedican added. "Everyone wrote us off and we just kept believing in each other all through the season and tonight as well."

The moments after a Stanley Cup is won are almost overwhelming. You don't know where to turn your attention. Where is the story of such an accomplishment told?

Is it told in the wild, arm-flapping leaps of a Glen Wesley, the active player who had waited longest to put his hands on the Cup -- 18 NHL seasons and 169 postseason games?

"You know, it was never, never about me. I truly believe that," Wesley said. "I still can't believe it. It honestly feels like a dream to me. Just throughout the afternoon, I couldn't sleep, just thinking about preparing for Game 7."

Or is the story told in the sudden, almost magical appearance on the ice of veteran center Doug Weight, who missed the final two games with a serious shoulder injury but was there on the ice in full gear to celebrate his first Cup win in 14 NHL seasons?

Earlier in the day, Weight had told Kevyn Adams that he would see him over the boards at the end of the night. "And he was one of the first guys I saw," Adams said.

Or is the story told in the likewise sudden pouring of fathers and mothers, wives and fiancées and children onto the RBC Center ice?

Traditionally, the families of Cup winners are sequestered in dressing rooms and anterooms away from the ice. Not on this Canes team.

Perched on Adams' shoulders was his daughter, bouncing up and down with her father's joy. Moments before, it was Adams with his teary face buried into the shoulder of his father.

"That was probably one of the most special things I've ever been a part of, when my dad walked out on the ice," Cullen said. "Just everything that he's done and that we've been though. It's something I'll never forget. It's special that we have a unique team like that."

In the moments after the final horn sounded and the confetti began settling onto the ice, the photographers and camera crews and officials slowly pushed the beaten Oilers to the edge of the rink.

They had battled back from a 2-0 deficit, scoring 1:03 into the third period, then continuing to pressure the Hurricanes. They outshot Carolina 10-6 in the third period, and were it not for a handful of sensational saves by playoff MVP Cam Ward, this game might still be being played.

But it wasn't meant to be. After erasing a 3-1 series lead, the Oilers could find no more miracles. Many sat on the bench watching the Hurricanes. Others like Ryan Smyth rested on one knee, leaning his tired weight on his stick.

"You picture it over and over again," Oilers center Jarret Stoll said. "You dream about it. Not once did it enter my mind, or anyone else's mind, that they'd be holding the Cup. It's tough to take."

"How do you think that feels?" center Shawn Horcoff said when asked about watching the Hurricanes parade around the RBC Center with the Cup. "Let's be honest. It's everyone's worst nightmare. It's a feeling you never want to feel again."

When they lined up for the ceremonial handshake, the Oilers were still wearing their helmets, while the Hurricanes were sporting brand new Stanley Cup ball caps. For men standing so close, it's hard to imagine a distance greater.

"What a way to bounce back after Edmonton had played such a great Game 6. We responded to it as we did many times this year after tough losses. But there's a fine line between winning and losing, and we found the way to fall on the right side of it," GM Jim Rutherford said.

Rutherford, of course, is the architect of this championship team.

Rutherford has worked for Hurricanes owner Peter Karmanos since the summer of 1983, when he retired from hockey. There have been more than a few bumps along the way. Indeed, many people believed this Hurricanes team wouldn't even make the playoffs, let alone win the franchise's first Stanley Cup.

"A lot of ups and downs, but we stuck with it," Rutherford said in a quiet part of the frenetic Hurricanes dressing room. "Boy, it's hard to win this championship, and sometimes you wonder if you're ever going to get close to it. When I held that Cup up on the ice, I never had a feeling like that in my whole career."

If Rutherford was the architect of this team, then it was Laviolette who was its chief engineer, the man who pushed the machinery forward, even when it seemed after Game 6 that it was stalled at the edge of greatness.

"Probably the greatest feeling of my life," Laviolette said. "I think for me, long after I hold the Cup tonight and have my time with it this summer, I will remember where this team came from, how hard they fought for each other."

The Stanley Cup reflects a million things. Every one of them, and more, on display on this night in Raleigh.