RALEIGH, N.C. -- After Monday's exciting, up-and-down, heartbreaking Game 1, the first question on everyone's minds is going to be: Do the Oilers still have a chance at the Stanley Cup without goalie Dwayne Roloson? 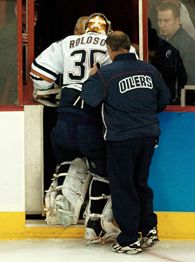 Edmonton lost its best player of the playoffs, its Conn Smythe Trophy candidate. What now?

Well, I am not worried about the Oilers as a team. They are very resilient, very tough mentally, and they'll be ready to rebound because they played great in Game 1. But the bigger issue is Ty Conklin. He's a kid who was thrown into a tough situation, and he'll have it stuck in his head that he cost his team the game. It was a nervous mistake. Defenseman Jason Smith is likely used to having Roloson there and didn't think to say, "I'm here, I'm here!" Instead, the puck goes off Smith's stick and to Rod Brind'Amour, who scored the winning goal with 31.1 seconds left.

So this is where Oilers coach Craig MacTavish has to work his magic. He can't lie to Conklin if he starts in Game 2. He has to tell the netminder that this is an opportunity of a lifetime, where careers can be made. MacTavish has to say, "You've sat on the bench since Roloson got here. It hasn't been easy for you, but this is your opportunity now, this is your team." Great players grab chances like this and run with them. I feel sorry for Conklin, but now we're going to see what he's made of.

He'll have to do it against a resilient Hurricanes team. They've come back all postseason long. The turning point of the game came when Mike Commodore dove and blocked a Ryan Smyth two-on-one pass, leading to Carolina's first goal. Instead of going into the second intermission down 4-0, the Canes made it 3-1. The Canes did it behind the leadership of Brind'Amour, the blocked shots -- including Glen Wesley's heroic effort -- and, of course, Ward.

Still, the Oilers have a chance because they've got a lot of heart. Ward made five unbelievable saves in the game; he came across twice, including a huge glove save on Shawn Horcoff, and stopped a Smyth breakaway. What MacTavish has to do now is point out all the positives: how they outplayed Carolina and how Ward is the reason the Canes won.

MacTavish has to sell the positives; he and his team can't dwell on Game 1.

Barry Melrose, a former NHL defenseman and coach, is a hockey analyst for ESPN.