In case the NHL isn't already reeling enough from its low regular-season television ratings, the numbers from the Stanley Cup playoff broadcasts could really stagger the league.

The four teams still playing in the conference finals are a quintessential small-market assemblage: Anaheim, Buffalo, Carolina and Edmonton. The last time the Stanley Cup finals were played, when small-market titans Tampa Bay and Calgary battled in the Cup finals in June 2004, ABC recorded its lowest ratings for the season-ending series since it began airing the NHL in 2000.

Now this. Edmonton is already up 2-0 on the Mighty Ducks in the Western Conference finals, which hurts appeal in American markets. Even north of the border, Edmonton is the smallest Canadian city that has an NHL franchise. The Raleigh-Durham area, home to the Hurricanes, is only the 29th-rated television market in the United States. Buffalo ranks 49th on that list.

And in Anaheim, which is part of the greater Los Angeles population base, 51 percent of the market doesn't have access to the Outdoor Life Network, one of the league's two current television partners, on its cable system.

"We need to grow the ratings. The NHL knows that, and we know that," OLN president Gavin Harvey said. "We think that's something that needs to be judged over a couple of years." 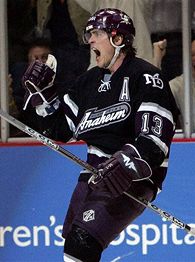 To put those numbers in perspective, more people watched the 13 WNBA broadcasts on ESPN2 last year than the NHL on OLN this year. And NBC's poker series, which preceded the network's NHL playoff coverage two weeks ago, easily outdrew the hockey by more than 200,000 viewers.

Still, the playoffs have been and are expected to continue to be very competitive, so the NHL is staying optimistic about the remaining Stanley Cup matchups.

"We don't think having small market teams necessarily equates to bad ratings," league spokeswoman Bernadette Mansur said. "Viewership is also about the quality of the game, and the game is in great shape."

One of the issues, though, for the ratings is the star power, or lack of it, on the teams still alive. It's hard to imagine any combination of Teemu Selanne, Michael Peca, Chris Drury and Eric Staal being embraced overwhelmingly during the Stanley Cup finals by NBC viewers used to watching "Deal or No Deal."

If there ever was a year in which the league needed a little luck with large-market success stories or teams with great traditions -- such as Detroit and Montreal -- this is it. In the wake of the first yearlong work stoppage in pro sports history, two new broadcast partners (OLN and NBC) are airing the NHL; and neither has been able to generate anything in the way of big ratings.

"The ratings comparisons are not an accurate barometer of how many NHL fans we have," Mansur said. "The younger 12-to-18-year-old male demographic isn't necessarily watching the games on television as much as they are following them on the Internet or using other technology to find out about their favorite teams."

The deal with OLN, which will bring the league at least $65 million for each of the first two seasons, has been the most criticized.

From a financial perspective, it seemed like a no-brainer when the deal was struck. ESPN, which had broadcast NHL games regularly since 1992, declined its one-year, $60 million option after the canceled season, when replacement programming such as "Bowling Night" and "Stump The Schwab" drew ratings that were at least comparable to its hockey broadcasts of a year earlier.

"It wasn't as if ESPN didn't want us at all," Mansur said. "It was just a question of how much they were willing to pay."

From a long-term future outlook, league officials rationalized that OLN -- famous for Tour de France and bull-riding broadcasts -- would market the league better than ESPN did because the new partner, unlike ESPN, would make the league's broadcast the cornerstone of its property.

OLN has done that, as its prime-time broadcasting during the playoffs essentially has turned it into the hockey channel.

Although the network has expanded to 69 million homes -- an increase of 6 million -- during the season, that number is still 21 million short of ESPN's reach. Critics also noted from the outset that putting hockey games on OLN would make broadcasts of the NHL appointment television only. Few people seem to stumble on to OLN the way they seem to come across ESPN on their cable dial.

So far, the playoffs haven't generated any additional interest for NBC, either. In fact, the ratings are down. The network's regular-season games were watched in 1.09 million households, according to Nielsen data, and playoff games have been watched by 1.02 million households

"Given that there was no play last year, the ratings are within the ballpark of what we expected," NBC spokesman Brian Walker said. "From a business standpoint, we expected to be profitable in Year 1, and we will be."

That was going to be a more attainable goal for NBC than for OLN, as NBC's deal with the NHL was a revenue-sharing arrangement rather than a rights-fee contract.

On the positive side, the NHL's hard-core fan base has returned to the game and boosted in-house attendance, as many league officials predicted would happen. The NHL is the only league that has averaged more fans in the stands after a work stoppage, and it has managed that feat twice. After a lockout shortened the 1994-95 season to 48 games, the NHL averaged 50 fans more per game than it did in the 1993-94 season. This year was even better. League attendance was up by 2.4 percent as arenas across the league were filled to 91.7 percent capacity.

The average per-game attendance of 16,955 is an all-time record for the NHL.

"It wasn't like we didn't expect things to be affected," Mansur said. "We did lose an entire season."