BUFFALO, N.Y. -- I saw Mark Messier on the ice. I interviewed Mark Messier after games. And, I can tell you, Danny Briere is no Mark Messier. (Don't take it personally, Danny, you're still a heck of nice guy and a very good hockey player.)

But for one night, Briere had a little No. 11 magic in his game. 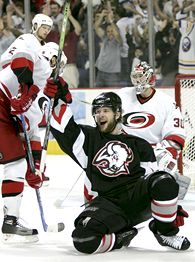 After getting the "it's Mark Messier time" pep talk from coach Lindy Ruff on Monday afternoon, Briere came through with a season-extending overtime winner in a 2-1 decision over Carolina Tuesday night, setting up a seventh game in this beauty of an Eastern Conference finals series on Thursday night in Raleigh, N.C.

And really, with so very little separating the Sabres and Hurricanes, it seems right that it will come down to a one-game, winner-take-all showdown.

"We wanted to show everybody that we're not a bunch of quitters," said Briere, who has scored eight goals during these playoffs. "We haven't quit all year and we're not going to start now."

No, the Sabres are not going to quit. But if you've been paying attention, you already knew that. And you also know the Hurricanes aren't the quitting type, either.

So, we get exactly what we figured when this whole thing started: a Game 7. For his part, Ruff is looking forward to it.

"It's going to be fun," said Ruff, who admitted to using the "Messier" reference when speaking to Briere during the off day. "The focus is let's have fun with it. We've been in, I don't know, 10 of our last 11 games have been one-goal games. So the stress level has been high every game. Every game has been tight and these guys just keep pushing through."

In Game 6, after blowing a two-goal lead en route to a bitter overtime defeat on Sunday, the Sabres could have cracked. They've been stretched to the limit without three of their regular defenders (Dmitri Kalinin, Henrik Tallinder and Teppo Numminen) since the third period of Game 3. They did get Numminen back for Game 6, but he lasted just one period (4:13 minutes of ice time) before calling it a night after aggravating a hip flexor injury. You'd have to think he's very doubtful for Game 7.

The Sabres also have been without top offensive threat Tim Connolly, who suffered a concussion in the club's second-round series against the Senators.

After Game 5, Ruff's no-name crew could have easily decided it just wasn't meant to be, but that would be against their nature.

"When you can stand back there [behind the bench] and you know you're going to get the effort, that is pretty special," Ruff said.

On Tuesday, Ruff got that effort from the opening faceoff. In fact, if it weren't for several brilliant early saves by Canes goalie Cam Ward, the game would have been a blowout.

Carolina, buoyed by Ward's terrific performance, managed to get the tying goal with less than four minutes left in regulation. The Hurricanes stormed the Sabres' net in the final minute in an attempt to end the series, but Sabres stopper Ryan Miller and his shot-blocking crew weathered the storm.

The game went into overtime, where it ended with some controversy. Carolina veteran Doug Weight was whistled for boarding Sabres winger Jason Pominville at the 2:28 mark. The penalty led to the winning power-play goal.

After the game, Hurricanes coach Peter Laviolette said he "wholeheartedly disagreed" with the call. And for good measure, Laviolette added another complaint.

"And I wholeheartedly disagree with the two missed calls," Laviolette said.

Asked when those "missed calls" took place, Laviolette didn't hesitate. "They were in overtime when we were killing [the Weight penalty]," he said. "A hook on Bret Hedican and the tripping on Justin Williams that led to the goal."

Weight, who threw his hands into the air in disgust when he realized he was being called for a penalty, believed he was innocent of any foul.

"He turned in to me," said Weight, who left the building with a limp (probably from an overtime blocked shot) and an ever-darkening shiner around his left eye.

The Sabres had a completely different view of the play.

"It was a pretty cheap shot," Ruff said. "I mean, he's defenseless in that situation."

Pominville, who drew four of the five Hurricanes penalties, thought it was the right call. "I never saw him coming," he said.

Either way, the penalty was called and the Sabres got the power-play chance. In Game 5, Buffalo squandered an overtime power play and watched Canes forward Cory Stillman bang a loose puck past Miller to win it on the man advantage.

This time, the Sabres didn't let the chance slip away. Briere converted the opportunity when his shoulder-high wrister from just inside the left circle caromed off the catching glove and shoulder of Ward, then popped into the air before falling behind the netminder and into the net.

"I just wanted to get the shot to Ward," Briere explained. "Their defensemen are aggressive. They block a lot of shots. I just figured if I could get it past their defensemen, maybe we could get a good bounce or a rebound."

After shooting the puck, Briere never saw it trickle past Ward.

"I saw the light go on," Briere said. "I saw the fans kind of jumping up. It's a heck of a feeling when you see everybody getting up in the building and the building is going nuts like that."

It looked like the kind of playoff night that Messier used to enjoy. The kind of night that made him a certain Hall of Famer, a guy that hockey coaches now and forever will recall in crucial games. In Game 6, with the season on the line, Ruff called for a Messier-like effort. His team didn't let him down.

Now it's on to Game 7. Anyone want to make a guarantee?