The Stanley Cup returned to England on Tuesday after more than 100 years' refuge in, mostly, North America. The homecoming was greatly appreciated by all the Canadians in London.

Some 114 years ago, Lord Stanley, earl of Preston, governor general of Canada, walked down Regent Street in London and purchased a trophy for "a challenge cup which should be held from year to year by the champion hockey team in the Dominion of Canada." 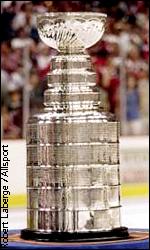 He paid 10 guineas (approximately $50) for it, appointed two trustees to take care of it, and unfortunately had to leave his post in Canada and return to England without ever seeing a Stanley Cup game.

And that's the way it's been. Every spring (let's be honest, every summer), when the Hockey Hall of Fame Cup keepers put on their blue blazers and white gloves and carry the trophy onto center ice, some commentator somewhere tells a tale about this British lord that, well, you know, "bought the trophy for 10 guineas..."

About five years ago, a Canadian TV producer living in England, Erik Janssen, was watching a live feed of the Dallas vs. New Jersey series when he caught himself wondering about something else.

"I just stopped to think that Lord Stanley actually bought the Cup here in England. My question was, 'Where the heck did he buy the Cup?'"

Janssen turned to the Hockey Hall of Fame, which, after some time of research, came back to him with an address: 130 Regent Street.

Janssen recognized the famous street that runs from the Oxford Circus to Piccadilly Circus. In fact, the place was just around the corner from his office. Well, now he knew. The other question in his mind was: "What am I going to do with this information?"

Having lived in London for a while, he knew the city was full of special places, commemorating famous people who have lived there and events that have taken place there. The blue plaques are for people -- pointing out that, for example, "Charles Dickens lived here," or "Beethoven lived here." And for events, there are green plaques.

"The idea seemed crazy at the time, but I wondered if the city of Westminster would commemorate the place where Lord Stanley purchased the original Cup," Janssen said.

Janssen took the proposal to the House of Lords and contacted the city of Westminster. He argued his case with books about the Stanley Cup, a biography of Lord Stanley and testimonials of what the Stanley Cup means to Canada and the rest of the hockey world.

He gave it a shot. He scored.

As of Thursday, there is a green plaque on the wall of the building at 130 Regent Street, saying: "Lord Stanley of Preston purchased the original Stanley Cup from a silversmith at this site in 1892 for the people of Canada to commemorate amateur and professional hockey. The Cup is now in the Hockey Hall of Fame in Toronto."

Present at the unveiling of the plaque was Lord Stanley's great-great-grandson Lord Edward Derby, who, together with the Lord Mayor of London, pulled the drapes.

The Stanley Cup was back at its birth place.

London has changed a bit in 114 years.

"Lord Stanley bought the Cup in this tiny shop at 130 Regent Street. It's not there anymore, but the building, Kerrington House, is still there. That's where the shop, GH Collis, used to be," Janssen said.

"There's been many different businesses in the same place, but for the past 12 years there's been an upscale jeweler's shop called Boodles and Dunthorpe."

Almost a full circle, in other words. As Janssen put it, at least it wasn't a Starbucks.

But the Stanley Cup, one which many people consider almost human, referring to the hardware as just "Stanley," was shown a good time in London. Janssen and the Hall of Fame Cup keepers, Phil Pritchard and Mike Bolt, rented a double-decker bus and showed Stanley the old country.

They visited 10 Downing Street (although Prime Minister Tony Blair wasn't available for a meeting), the Houses of Parliament, rode a black London cab, took a cruise on the Thames and, naturally, visited the Maple Leaf pub at the Covent Garden, which is the only Canadian pub in England.

The Stanley Cup even got to feel the strong embrace of a London bobby on Piccadilly Circus.

Even if the plaque ceremony was widely covered in Canada, with all of the major networks present, the locals weren't quite as impressed. Hockey just isn't their bag, baby. That doesn't mean Stanley isn't loved.

"We were walking on the Parliament Square, and these Russian kids came running to us, yelling, 'Stanley Copa, Stanley Copa.' Everybody following hockey loves the Stanley Cup, and the tourists here were just surprised," Janssen said. "Canadians are just bewildered. They couldn't believe it was the real Stanley Cup."

On Wednesday, Janssen, Pritchard and Bolt were having lunch in a British Sherlock Holmes pub. The Stanley Cup was on the table, some British ale was enjoyed and Janssen got to feel what it's like to be in the presence of a true celebrity.

Or, a freaky-looking buddy.

"Some people came up to see it, but more often than not we got the 'what the heck is that' reaction. I guess the Brits still need some more time to embrace the sport of hockey," Janssen said with a laugh.

If the Lord Stanley family is any indication, the rest of the world may just have to be patient with the Brits. While his great-great-grandfather did like hockey, he never saw a Stanley Cup game. Lord Edward Derby takes the tradition one step further. He's never been to a hockey game.

"He told me that it was long overdue, and that one day he should go and see one," Janssen said. "But maybe it's just as well; maybe that is a good tradition."

For Janssen himself, it's back to reality. Hanging out with Stanley for 72 hours is a privilege very few people get. According to the Hockey Hall of Fame's rules, each member of the winning team gets 24 hours with the trophy. They can do whatever they want, but only for 24 hours.

But, on the other hand, there is one thing the players get to do and Janssen doesn't. That's hoisting the Cup above the head. That routine is reserved strictly for the champions, the Cup keepers reminded him.

But Janssen is both happy and relieved to let Stanley go on.

"I waited five years for this moment, for the plaque. I've been looking forward to it for a long time, and now I can't wait until it's all over," he said, only hours before the Cup was back on a plane to Canada.

The Stanley Cup had been to its birthplace, its roots, and it was time to begin another chapter in its tale. According to Janssen, the timing for the trip had been carefully considered.

"We thought that it would be fitting to have the Cup back in England, to erase the horrible memory of the lockout and start fresh," Janssen said. "You know, clean slate, winner takes all, game on!"

Risto Pakarinen is a freelance writer based in Stockholm, Sweden.