GREENBURGH, N.Y. -- Jaromir Jagr got only as far as the trainer's room Sunday after leaving the ice with his left arm limp a day earlier in the New York Rangers' playoff opener. 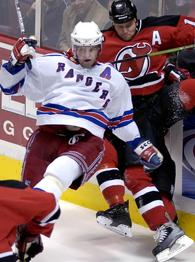 His teammates practiced without him and there was no immediate indication that the All-Star who scored 123 points this season would be available to face the New Jersey Devils in Game 2 on Monday night.

"He's uncomfortable, but it doesn't appear to be too bad," coach Tom Renney said Sunday.

As disjointed as the Rangers looked in giving up five power-play goals during Saturday's 6-1 thrashing, having to face the formidable Devils without Jagr makes the outlook that much bleaker.

Patrik Elias had two goals and four assists for New Jersey, which earned its 12th straight victory in the opener.

The first half of New York's practice was sluggish but improved steadily. The highlight of the hourlong session was Michael Nylander's outburst that came after the puck was knocked away. He responded by slamming his stick hard against the glass several times.

New Jersey already entered this first-round, best-of-seven series as the heavy favorite. New York is riding a six-game skid that cost it the Atlantic Division title to the Devils on the final day.

Officially, Jagr's injury -- which occurred late in the out-of-reach game -- is being described as an upper-body problem. While getting a rare shift as a penalty killer, Jagr tried to take a swipe at Devils forward Scott Gomez.

He made a stiff-arm type move as he carried the puck and didn't connect, apparently causing the injury. It'll be up to doctors, Renney and Jagr to decide if he can play Monday.

"As long as we're working hard and playing within our system we should be able to get scoring chances with him out there at less than 100 percent," Renney said. "But we're going to be really very, very careful here and make sure that we give him a chance to assess where he is, both psychologically and physically, before we even contemplate putting him back in."

Rangers defenseman Darius Kasparaitis also sat out Sunday's practice as he recovers from a groin injury that forced him to miss 12 of 13 games before the season finale. He was in the trainer's room with Jagr before practice but didn't ask any questions.

"He doesn't look too happy, and when he's cranky, you don't want to talk to him," Kasparaitis said. "Jaromir is one of the best players in the league and the reason we're in the playoffs. But if he's not playing, other guys have to step up. We can't rely on Jaromir. It means we have to rely on our team spirit and team defense and score maybe one goal and win a one-goal game."

That would be a start.

During their losing streak, which started with a loss to the Devils, the Rangers have been outscored 26-10 and managed only one goal in each of the last three defeats. Rookie Henrik Lundqvist returned from a hip injury for the last two games -- including a 5-1 loss to Ottawa.

Lundqvist, who led Sweden to the Olympic gold medal, hadn't allowed 11 goals in any three-game stretch this season, let alone in back-to-back contests.

He faced constant pressure in his NHL playoff debut on Saturday, largely because the Rangers gave the Devils 13 power-play chances. The traffic in front caused trouble for Lundqvist, who said he was having problems seeing the puck throughout the game.

"It was 6-1 but it wasn't that big of a difference between the teams," Lundqvist said. "The big difference was all the penalties. I think if we can stay on the ice and play a five-on-five game, I think we have a good chance to get a win."

Renney was surprisingly noncommittal when asked if Lundqvist or backup Kevin Weekes, who played all seven games during Lundqvist's
absence, would get the nod in Game 2. He planned to review Saturday's goals with Lundqvist and goalie coach Benoit Allaire before making a decision.

His biggest concern is making sure the Rangers face the Devils in even-strength situations.

"If we give ourselves a chance five-on-five, we'll get that win we're looking for," Renney said. "If we don't, it's short."