When he's not arresting bad guys on "CSI: NY," stopping pucks in "Miracle" or locking lips with Jennifer Aniston on "Friends," actor Eddie Cahill is like any die-hard hockey fan this time of year. The 29-year old New Yorker is living and breathing the NHL playoffs, and sharing his thoughts in his own hockey blog.

In this week's Facing Off, we ask Cahill how Rangers fans, like him, are different than Islanders fans, how he got ready for the role of gold-medal winning goalie Jim Craig and which team has the right stuff to hoist the Stanley Cup in June. 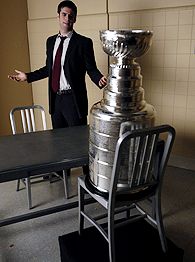 Question from David Amber: How did you get your own playoff blog on the NHL.com?

Answer from Eddie Cahill: I went to a couple of Rangers games at the Garden, and someone at the NHL had seen me and figured I was a fan and decided to approach me about having a blog during the playoffs. It's very cool, being a big fan like me. It makes you feel included in a weird way. It brings you a little closer to the game, which I like.

Q: How has the blog changed your way of watching the games?

A: Watching it now, it's odd because I'm taking notes [laughs]. I won't pretend to be a journalist any time in the near future, but I'm taking notes and trying to find that bit of inspiration that I connect to and that I think that other people might be connecting to. I am writing for fans like me. I watch 82 games a year. I am a huge Rangers fan.

Q: As a New Yorker, why did you choose to be a Rangers fan and not an Islanders or Devils fan?

A: Well I'm not from Jersey and I'm not from Long Island [laughs]. Someone just told me where New Jersey was [laughs]. It wasn't even a choice. It was just natural to cheer for the Rangers.

Q: How are Rangers fans different from Islanders fans?

A: We're smarter, we're taller, we're better looking [laughs]. You know, not too long ago, I was at the Coliseum for an Islanders-Senators game and they were chanting "Rangers suck!" We don't do that.

A: [Laughs] Yeah, but that has history to it. That has meaning.

Q: Watching your Rangers this postseason, who could the team more afford to lose to injury, Jaromir Jagr or Sean Avery?

A: [Pause] Wow, that's intense. That's a big question, I think Jagr's ability to protect and control the puck will eventually lead to finding its way to the back of the net. Avery is more flashy and more exciting, so I think he might be a more noticeable asset. But we need both those guys. I just can't answer that.

Q: What do you remember most from the Rangers' 1994 Cup win?

A: [Mark] Messier guaranteeing the win. I was a sophomore in high school, so I was really into it. There was this crazy buzz around the city, like "Wow, this may actually happen." Of course, Stephane Matteau burying the Devils was huge. I guess I remember more about getting to the final than the final itself.

Q: You played 1980 U.S. Olympic team goaltender Jim Craig in the movie "Miracle." What is your background as a hockey player?

A: Not much. I have just always been a fan. When I was 22 years old, I was in Vancouver shooting a series called "Glory Days," so I started playing then. Finding ice in Canada is as easy as finding a basketball court in New York. In Vancouver, I met up with a guy, Brad Turner, who played at Michigan, and we hit it off. So, he just taught me how to skate. That was a few years before "Miracle" began. Until then, I had only been on skates about five times in my life.

Q: Do you still play?

A: About three months ago, I started playing pickup about three or four times a week. I play in L.A., so we get some interesting characters out on the ice. Last week, Igor Larionov was out there. And we get some of the trainers and assistant coaches from the Kings.

Q: What prep work did you have to do to get ready for the role of Jim Craig?

A: When we first got to Vancouver to shoot the movie, they had arranged a six-week training camp for all the players and for me as the goalie. First, I had to learn how to put the gear on [laughs]. Getting balance was a big thing. I learned some basic moves, I stopped some pucks. After about three weeks, I got integrated into some of the choreography they had been working on. That was pretty awesome. I think we can all learn things if we really want to. It's fascinating how that can get expedited when you have a support system around you. I had 18 people telling me "You can do it." So, it worked.

Q: You were only two years old when the United States took home gold at Lake Placid. Do you have any memory of how big that event was?

A: I have no memory of what happened at the time. Later in life, when I was a teenager, I heard a lot about it. Even my mother, who is the farthest thing from a sports fan, was talking about it years later. I almost had a feeling of guilt about not being able to say, "I do remember." [Laughs]. Sitting next to Jimmy, going through the video and interviews with him and having no concept of exactly what that moment was like for him was hard.

Q: What's been the highlight of your acting career so far?

A: I think I'd have to say "Miracle." That group of guys was great to work with. It was a good transition for me. I love being on a television show, but there was something special about my experience on that movie. I mean, getting to live out my fantasy hockey career was pretty cool. When you try to get into acting, for so long it takes a minute, or in my case, a good number of years before you look around and say, "Holy crap! I might actually be a part of this thing." And after "Miracle," that happened for me. I realized this very well may be what I do for a living.

Q: If "Miracle" was No. 1, I'm not sure where you put making out with Jennifer Aniston on your list?

Q: You've done movies, you're now on one of the nation's most popular shows, "CSI: NY." But is your stint on "Friends" as Aniston's love interest the one role that resonates most with your fans?

A: Hands down. That show had the most reach. It was so popular, so more people identify me from "Friends" than anything else.

Q: What was it like being on that set with those six big-name actors?

A: It was overwhelming. They were very kind to me. One day, I'm going to auditions. The next day, I'm at work, looking around, and there's Jennifer Aniston, there's Lisa Kudrow and the rest of the cast. I had trouble accepting myself there. It was overwhelming, but it was fun. I had a "holy crap" moment for a little bit.

Q: Yeah, but now they can't even get you on the phone. They have to go through your publicist.

A: [Laughs] Of course. I'm impossible to reach [laughs].

Q: Was it nerve-wracking to have a make-out scene with someone as high profile as Aniston?

A: It's not as nerve-wracking as it is awkward. You're in front of hundreds of people in the studio audience, and you know it's coming. It's in the script, it's not like I jumped her, you know what I mean [laughs]. I knew the audience was going to go crazy. They were amped up for our scene. So, naturally, when we started to kiss, the place went nuts and I had to deal with that energy.

A: The kiss was good, but it was surrounded with 400 people screaming at you, so it was a little different. Imagine going out with a girl you've been dying to go out with, and out of the woodwork come hundreds of people [laughs]. It detracts a bit from the tenderness.

A: Because it's based in New York. That's an easy one. And because it's the one I do [laughs]. They're both good.

Q: So, who wins a hockey fight between you and David Caruso?

A: Hey, what are you nuts? C'mon, he probably can't even stand on skates [laughs]. Thanks for these questions. Next thing I know, I'll be doing some VH-1 special having to fight Caruso in a celebrity match.

Q: You obviously are a big fan. Would you trade in your acting career for two seasons as a third-line winger in the NHL?

A: Wow! That's big. Am I guaranteed at least some type of career in the minors afterwards?

A: OK, I would strongly consider that.

Q: When I talk to NHL players, so many tell me they would have loved the chance to play with Wayne Gretzky or Mario Lemieux. Is there one actor you would love to work with?

A: Paul Newman. I think he would make me better. It's the same reason you want to play with Jagr or [Brendan] Shanahan -- because they will make you better.

Q: On your blog, you talk about spending a day with the Cup when it was brought to the "CSI: NY" set. What was that like?

A: That was pretty awesome. It was on set. So, I grab the Cup, I kiss it, I hold, then I have that moment of guilt where I was like, "Did, I actually deserve to do that?" But it happened so fast. That was special. Just looking it over and knowing all the history the Cup represents.

A: New York Rangers. I really believe it. Let's put it this way, the Rangers are my dark horse. I think Buffalo has a hell of a shot and I like the Ducks in the West. Defensively, the Ducks are great. I have seen them play and they can neutralize the other teams' speed and they just play smart.