When she's not busy performing on "Dancing with the Stars," recording an album or playing Anna Nicole Smith in an upcoming movie, Willa Ford somehow finds time to dish out the inside scoop on the Dallas Stars' dramatic defeat on her personal NHL playoff blog.

In this week's Facing Off, Ford tells us why life in Dallas hasn't always been perfect for her fiancé, Mike Modano, what it was like to live through a quadruple-overtime game and how her soon-to-be-released movie could help change public opinion about a misunderstood American sex symbol.

Question from David Amber: How did you end up blogging for the NHL playoffs?

Answer from Willa Ford: The NHL people contacted me. They knew about my relationship with Mike Modano, so they thought it would be cool for the fans to get a daily update on what the Stars are going through during the playoffs. I thought, "Sure. That will be great." But then, I got signed on to do this new movie, about the life of Anna Nicole Smith, so it has been a little hectic. I didn't get to go to any of the Stars' playoff games. I had to watch on TV or get updates on the Internet.

Q: Once the Stars were eliminated, you stopped blogging. Did you enjoy it though?

A: Yeah, it was fun. I really, really love the sport. It's funny, because when I started this blog, people just assumed I didn't know anything about hockey. I have been with Mike for five years, so I really do know the game now. After my second or third blog, people were sending me e-mails saying, "Thanks for the update, Mike." People actually thought Mike wrote it. It was making me laugh because Mike was thousands of miles away playing in the series. Why would Mike be writing the blog? It was really a compliment to me.

Q: What was it like watching Mike play in what was the most dramatic first-round series -- that seven-game series loss to the Canucks?

A: It was tough, lots of ups and downs. There are some holes in the system when it comes to the Stars right now. There are some changes that need to be made and I think everyone is pretty aware of it. Within the coaching staff, you know that "too many cooks in the kitchen" thing; there's a bit of a struggle. One head coach is saying one thing and then you have another coach saying another. They either need to come together on that or see eye to eye because it's a little confusing to the guys, I think. This is all stuff I noticed firsthand. You can clearly see it on the ice, but when you live it like I do, it's tough. I know everything that goes on.

Q: How frustrating was this season for Mike, when the team had trouble scoring for long stretches, including the playoffs?

A: This is the third straight season they got knocked out of the playoffs in the first round. Being Mike, who is toward the end of his career, it is very frustrating. A few days ago, Brett Hull gave him some great advice. He said, "Mike, stop stressing about the end of your career, stop stressing about what's not happening and start having fun because I wish I had those last few years back." It's hard for Mike because he really wants another Cup.

Q: Is he worried he won't have another chance at a Cup?

A: He is just a phenomenal player and gets respect at all levels. There are just a few pieces that he feels like are missing and he needs to get that next Cup. The team has got to go out and get his wingers for him. There are just a couple of things that need to happen because there is a lot going on that is very frustrating for him. And last year, when they didn't make it past the first round of the playoffs, it was like, "Oh, let's throw it on Mike's back because he's the captain and make him an assistant captain now." I mean, that was the cheesiest thing. That was the most classless thing the organization has ever done.

Q: How did you respond to that?

A: I was completely flabbergasted and pissed off to be quite honest with you. I mean, how rude. He is a franchise player who has given his all to his team. It was like somebody didn't want to lose their job -- nobody wants to lose their job. "Let's just blame it on this and maybe this will fix it." Clearly, that didn't fix it. Mike's leadership has never been an issue. Mike speaks and the guys listen. Mike's feeling is, "I'm not here to baby-sit these guys. As a captain, I'm not here to baby-sit and check on people. Everyone has their job. My job is to make the whole thing work. Everybody come together, I need to speak when it's time for me to speak, but otherwise, there is no need to baby-sit people."

I think the staff and the GM [Doug Armstrong] have a different idea of what a captain should be. They think a captain should be yelling at their team. They think a captain should be absolutely as verbal as possible. I know from running a household with Mike how he can be quiet; but when he says something, it can be very powerful. I really think it was one of the saddest moments of Mike's career, I really do. It was a long time coming to even get the captaincy. He waited a long time, considering [Derian] Hatcher was there and he already had it. There's no need to ever demote somebody and give it to someone else. Mike would never want that. I think the whole thing was really nasty, how it went down. But Mike being the athlete that he is said, "OK fine. You want to do that, now I'm going to prove a point." He went into this season trying to put up numbers better than the last two years. "I want to show that just because I'm almost 37 years old, I'm not done." I think he did this year. He really put up good numbers, even through injury.

Q: What was your conversation like after that four-overtime game against Vancouver?

A: Oh my god. I was busy reading my movie script and preparing my lines, so I was working late and I thought I was going to miss the whole game. Little did I know, when I got home, there was going to be an extra four periods. I called him after the game and I kept just asking if he was OK. He was exhausted. They had all the guys on IVs because their fluids were so low. He was just really tired. To lose the game like that was tough. But, at the same time, it's like just, "Somebody score! Let's get this over with!" [laughs] He said, "I don't think I've ever played that long."

Q: How did you two meet?

Answer from Modano in the background: You picked me up on the Internet.

Willa Ford: Yeah, I stalked him. Shut up! Oh please, you wish! Basically, we met through friends doing a charity event. So, friends set us up.

Q: So, when are you guys getting married?

A: [Laughs] That's a good question. Probably sometime this summer. I can't say anything more. 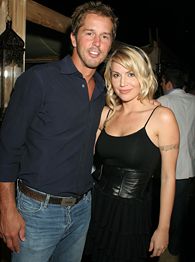 Q: This season, when Mike set the record for goals scored by an American-born NHL player, what was that game like for him?

A: You would think it would have been a big exciting moment, but two things -- (A) they lost the game; (B) Nashville didn't stop the game to acknowledge it or anything. Considering it was an American record, you would have thought they would have stopped the game for it, but they didn't. But when he came home, he had a beautiful homecoming from his fans in Dallas. They had the red, white and blue streamers; they did a video tribute, stopped the game and it was really special. We also had a really great party with all his team, family and friends here in Dallas. It was just a great way to honor the moment.

Q: As far as your career goes, you have done a bit of everything. You're an actor, a singer, a dancer, a model. When fans approach you, what are you most famous for?

Q: You are playing Anna Nicole Smith in a movie to be released later this year that details her life and death. What have you learned about her as a person in preparing for this role?

A: I didn't really know anything about her before, but after researching her for this role, you just fall in love with her as a person. She did everything to try and have a better life. It's really sad because all she really wanted was to have a better life for her son; then to lose him so suddenly as she did was really tragic. More than anything, I have found a new respect for her in doing this movie, and I think people that watch it will too.

Q: Was it hard to pick up her unique mannerisms?

A: No, that's probably why I got the part. It was really, really easy for me. I just fell into the accent and everything else. I just watched her and just replicated what I saw.

A: [Pause] It's funny. I have no opinion when it comes to any other team. Mike thinks Detroit. He just whispered it to me. I have heard him say that before. If the Stars aren't in the finals, I couldn't care less.