OTTAWA -- Here's the problem with history, sometimes you don't know if you're in the midst of something historic until long after the fact.

But if we had to guess -- and maybe if the Ottawa Senators and the Pittsburgh Penguins had to guess, too -- we'd say Wednesday night will be something that qualifies as historic, or at the very least, the start of something that will over time prove to be historic. 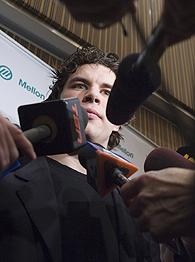 Maybe in the moments before the puck drops at the Scotiabank Place, when the players are standing on the ice or on the benches, they'll steal a glance at Sidney Crosby, and maybe the hairs on the backs of their necks will stand up a little. Maybe they'll even give a quick smile or a shake of their heads wondering what might unfold.

Wednesday marks Crosby's first shifts in the NHL playoffs, the first steps toward something that holds tremendous promise, not just for this spring and for the Penguins, but something bigger and greater.

It's why the press box is expected to be full here for Game 1.

It's why the Penguins asked for credential requests several weeks before the end of the regular season.

It's why NBC denuded venerable "Hockey Night in Canada" of a Canadian matchup on the first weekend of the playoffs, insisting Game 2 of the be played Saturday afternoon and leaving CBC with the equivalent of moldy bread crust (Tampa Bay vs. New Jersey) for its traditional Saturday evening broadcast.

"It" begins with the 19-year-old Crosby, the youngest Art Ross Trophy winner, who led the league with 120 points, six more than defending scoring champ Joe Thornton. But it's also about what Crosby and the rest of the Penguins represent -- unbridled youth, talent that seems to mutate on a daily basis and the smell of greatness, long-term greatness.

"There's always pressure," Crosby said after the Penguins arrived here late Tuesday afternoon. "But I'm not going to put too much on myself. I'm more excited for the fact of playing here and get my first taste of playoff experience.

"But I don't think you can really be too excited or feel pressure too much."

How this series unfolds should provide great drama.

The drama already enjoyed its first moments. On Monday, Ottawa coach Bryan Murray railed against the commonly held notion the Senators are a team of chokers. Then, on Tuesday, Murray did his best to paint the Penguins as the favorites, even though it's Ottawa that has home-ice advantage with the fourth seed in the East. Murray pooh-poohed the suggestion the youthful, inexperienced Penguins don't know enough to be fretful of the playoffs.

"I don't think that's true at all," Murray said. "I think Pittsburgh has a lot to lose, too."

What did Crosby make of the notion it was the Penguins, not the Senators, who should be feeling the extra burden of pressure that comes with being a favorite? Did he buy it?

What does he think of the theory? "I don't think it's true. That's what I think," Crosby said.

Veteran Gary Roberts, acquired at the trade deadline to lend some much-needed experience to the Penguins lineup, laughed at the notion they were somehow the favorites heading into Game 1.

"Obviously, he must be watching a different channel than I've been watching," Roberts said of Murray. "Whether you're the favorite or not, it's a seven-game series."

Penguins coach Michel Therrien likewise believed his squad wasn't the one that has to be looking over their shoulders, lobbing the "pressure" grenade back into the Senators' foxhole.

The Senators always have good regular-season success, "but, for whatever reason, they get bad luck in the playoffs," Therrien said. "This year, I'm sure they feel the pressure to be successful in the playoffs."

"We recognize that Pittsburgh has a lot of young talent that are going to be in the league and very successful for a number of years," Murray said. "Sidney is certainly an example of that. I think he's a phenomenal player. I think if we're able to play well against him on a consistent basis, we will achieve a great deal.

"But yeah, I think being part of the playoffs, I always take it as an opportunity. You get knocked hard when you don't win. Sometimes the other team deserves to win. But very definitely I think we look at this [as an opportunity] and hopefully we're the first team to knock that crew out and move on. But I give them a great deal of respect."

Do the players think they'll look back on this series as something special, no matter what happens?

"I guess that would be easier to answer if you could talk to me in 15 years," Ottawa defenseman Chris Phillips, a former first-overall draft pick in 1996. And if Crosby goes on to win 10 Stanley Cups, that'll all be well and good, he said, "as long as he doesn't get past the first round this year."

History will be made in front of their eyes. Now all that's left to discover is what story will unfold.