PITTSBURGH -- After the crowd had risen riotously to its feet in the final minute of the game, a sudden, strange quietness fell over Mellon Arena as the time clock clicked to zero.

The Pittsburgh Penguins filed quickly off the ice, while the Ottawa Senators just as speedily congratulated netminder Ray Emery and slipped off to their dressing room with a 2-1 win and a commanding 3-1 series lead.

And in the quietness of the standing-room-only crowd, one wondered if there was the realization that Tuesday's Game 4 might have been it for this surprising, resilient, talented Penguins team; this might have been a goodbye of sorts. 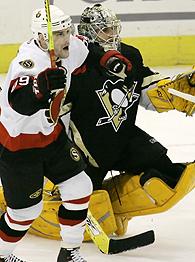 It would be more than a little ironic if it was so. Because on this night, when the Penguins for the first time in this series displayed focus over 60 minutes, it was not enough.

"I thought that was the first time we felt comfortable in the playoffs," Pittsburgh coach Michel Therrien said. "That's a good sign."

True enough. But the question is whether it is a positive sign for the immediate future or the long-term future.

On Thursday night in Ottawa, the Penguins will have a chance to force a sixth game, but given the emotional expenditure that came with Tuesday's 2-1 loss, it's hard to imagine this young team finding another reservoir to stave off elimination. Not against an Ottawa team showing it can win the close ones, even if its history suggests otherwise.

"I have to be honest," Ottawa coach Bryan Murray said. "They played very, very strongly. Maybe they have another level. I don't know."

Earlier in the day, Therrien acknowledged what few coaches admit at any time, let alone during the playoffs: His team seemed distracted.

"For a young team, it seems like we have a lot of distractions," Therrien said of a Penguins team that boasts 16 players whose NHL playoff experience dates back exactly a week.

Therrien pointed out that during the regular season, a morning skate might have drawn four reporters. On this day, there probably were 50 reporters and broadcasters on hand.

"Everything's a distraction. This is kind of new for them," Therrien said.

The coaching staff has been trying to balance pushing the players, pointing out mistakes and demanding more with trying to keep the team from being overwhelmed by the playoff experience.

When the Penguins sat down to watch video Monday, Therrien showed them clips of things they'd done right, positive things to keep reassuring them they belong here. He told them if they calmed down and played the way they're supposed to, they would have a good chance to win Tuesday night.

"We've been teaching that from Day One. This is not a new message we're trying to send to our team," he said.

And on Tuesday night, that strategy seemed ready to bear fruit.

For the first three games, the Senators controlled roughly seven of the nine periods. Yet, even after Jason Spezza scored a fluky power-play goal -- one that bounced off Jordan Staal's stick and over Pittsburgh netminder Marc-Andre Fleury into the net just 3:25 into the game -- the Penguins continued to stay on topic.

In the three previous games, the youthful Penguins had wilted in the second period. They'd been outscored 6-1 and outshot 44-18. Yet, Tuesday night, as though a switch had somehow been flicked in the team psyche, the Pens roared after the Sens, trading chances and hits.

Pittsburgh tied the game at 8:08 of the middle frame when 18-year-old Staal, who continues to marvel with his poise and nose for the big play, banged home a loose puck after yet another big offensive zone hit by veteran Gary Roberts.

As the third period began to wind down, though, it was Ottawa that slowly exerted itself, quickly clearing the puck from harm's way in its zone and stifling the Penguins' attack with its forecheck. Although the Penguins did have a handful of good chances, they were outshot 12-5 in the third period.

"A gritty effort," Murray said of his squad.

In the Penguins' dressing room, players tried to reconcile the yin and yang of playing well, but understanding it wasn't enough, and worse, wondering how much more there was to give.

"We've got to go into the next game not feeling bad for ourselves," defenseman Brooks Orpik said. Still, he acknowledged, "it's pretty disappointing. You've got to be happy with the effort and disappointed not to finish it off. Good teams find a way to win, and they did that tonight."

All of which is true.

The Penguins stayed out of the penalty box, a bugaboo of previous games during which they'd allowed four power-play markers. They got more inspired play out of their role players like Nils Ekman, who was in the lineup for Erik Christensen. They got key saves from Fleury when they needed them. Even Evgeni Malkin, still scoreless in this series, seemed more in the picture Tuesday, playing mostly on a line with Sidney Crosby and Mark Recchi.

"We can come in the room tonight and every guy can look at themselves in the mirror and look at the guy next to them and say they gave an honest effort and laid it out there," Crosby said. "I think we showed ourselves. We showed them that we're a tough team to play against when we want to."

While Recchi acknowledged they were in "a big hole," he thought there were many positives on which to build in Game 5.

"We finally played a full 60 minutes of our game plan," Recchi said. "I think if we can stay that course, we're going to get better and better."

If there's anyone who understands the notion that anything is possible on both sides of the playoff ledger, it's Recchi.

A season ago, his Carolina Hurricanes dropped the first two games of their opening-round series against Montreal and then came back to win four in a row en route to a Stanley Cup. Similarly, Recchi was part of a Philadelphia Flyers team that jumped to a 3-1 series lead against New Jersey in the 2000 Eastern Conference finals, only to see the Devils work themselves back into the series and win it in seven games.

Still, in the quiet of Mellon Arena, one couldn't shake the nagging feeling that this wasn't so much the end of a game, but the end of a season.