ANAHEIM, Calif. -- Long after the Stanley Cup first appeared at center ice and the Ottawa Senators retreated to their dressing room in defeat, many of the Anaheim Ducks refused to leave the confetti-covered ice.

In the stands, thousands of Ducks fans likewise seemed reluctant to leave, dragging out the moment, leaning against the glass, standing in the aisles in the lower bowl and savoring the sight of the first Stanley Cup championship in the state of California.

And, in this moment, for these people, none of the baggage the NHL perpetually drags behind it mattered one iota.

There were the Niedermayer brothers, Rob and Scott, doing separate television interviews, their shoulders almost touching. Scott, now a four-time Cup winner, had earlier taken the Stanley Cup from NHL commissioner Gary Bettman and quickly turned to hand it to Rob, a first-time Cup champion after two disappointing trips to the finals in 1996 and 2003.

"I figured I could use my rank as captain to make that decision. I thought it would be pretty special to be able to do that," said Scott Niedermayer, who also won the Conn Smythe Trophy as playoff MVP.

A few feet away, there was Teemu Selanne, posing in front of a phalanx of cameras with the Cup, his trademark grin plastered across his sweaty, 36-year-old face as though he'd have been happy to stay there all night and celebrate his first championship since breaking into the league in 1992-93 with Winnipeg.

"I've played so many games for this dream and there have been times I didn't know if it was ever going to happen, especially when there were tough times with my knee and everything," Selanne said. "But the last two years have been by far the best part of my life. And I enjoy it every day."

Close by, there was defenseman Joe DiPenta, hunched over holding a cell phone, trying to hear his two sisters and his grandmother, who were at his parents' home in Cole Harbor, Nova Scotia. On this night, at any rate, DiPenta had usurped Sidney Crosby as the hamlet's favorite son.

"Just everyone's pretty excited," said DiPenta, who was in and out of the lineup during the playoffs, but was part of the lineup Wednesday night when the Ducks crushed the Senators 6-2 to win the team's first Stanley Cup championship and bring hockey's Holy Grail to California for the first time since the L.A. Kings entered the league in 1967. "People are just crying on the phone, emotional and just very happy for me and they're people that have stood by me throughout my life and supported me. They were with me there on the ice tonight."

If the path to this seminal moment in the state's hockey history has been filled with more than a few twists and turns and dead ends, it only reflects the many paths followed by the Anaheim players that made it happen. 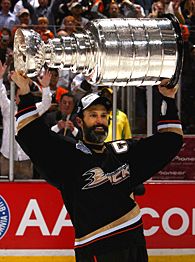 In the upper bowl, a fan had inked a sign that simply said, "Thank you, Mr. Burke."

GM Brian Burke built a team in his own image, a team that fans could warm to. Hard-nosed and hard working, the Ducks won a Stanley Cup when their worst enemy was themselves. And, in the end, they beat back their own demons -- if carelessness and lack of discipline can be called demons -- to close out the Senators in stunning fashion.

Although they flirted with their own mortality, committing three first-period penalties after taking a 1-0 lead, they simply flicked the self-control switch and humbled the Senators.

The Ducks did not take a penalty after the first period and allowed only 13 shots on goal while torching Ottawa netminder Ray Emery for six goals on 18 shots. Five different Ducks scored in the deciding game and the only player with two goals was checking line winger Travis Moen.

"I kept looking up at the clock and I was on the ice, and when it hit zero, I threw my gloves as high as I could. It's just a dream come true," said Corey Perry, who scored the final goal of the Ducks' championship season with three minutes left in the third.

Nearby, Perry's younger brother and parents Geoff and Nancy watched the raucous celebration.

"I'm so happy that they're here," Perry said. "They've seen me go through hard times and the good times. Just to have them here is something special."

What was it like to first touch the Stanley Cup?

Can a team still succeed in the new NHL playing old-fashioned, face-against-the-glass hockey? Yes. Provided you throw more than a healthy dose of talent and speed into the stew. This win isn't a step back for the league, but it is an eye-opener of sorts.

"I think I'm one of the most fortunate coaches in the world to have that type of locker room and no-maintenance players," Carlyle added. "You ask any coach, if you don't have to focus on one or two individuals, you can constantly focus on the group. It makes your job that much easier and these people have delivered."

But as many questions are answered in the spray of champagne and cacophony of celebration, more are asked.

• Just how good is Scott Niedermayer, for instance? Does he now make a case for himself as the best defenseman of all time with his performance this spring?

• Netminder Jean-Sebastien Giguere has been overlooked throughout these playoffs. But surely his 13-4 record, 1.97 goals-against average and .922 save percentage this spring will change that, especially given the fact the Ducks tied an NHL record with 12 one-goal victories this spring. It appears as though he will re-sign in Anaheim, but he can expect a healthy raise.

• Ryan Getzlaf emerged as a bona fide NHL star this playoff season, leading the Ducks in scoring with 17 points. At 22, Getzlaf was crucial to the Ducks' advancing to the finals, and in just his second NHL season he may soon join the names Crosby, Evgeni Malkin and Alexander Ovechkin as part of the next wave of young superstars.

• As for Selanne, he will have to decide whether to go out on top or come back for more. "I've always dreamed about retiring on the top and I don't know if you can top than this," Selanne said. "So, there's some big decisions coming. But now it's time to play."

Perhaps the bigger question will be what will follow in the wake of this win. Will it affect Anaheim, make it a hockey hotbed? Will it create the kind of buzz that has been seen in Tampa and, to some degree, in Carolina following Cup wins in those nontraditional markets?

We spend so much time in hockey debating the game's relevancy, especially in the United States, where so few people, relative to other sports, watch the game. Monday night's game in Ottawa was tied for the lowest-rated television show in NBC's history.

But here's the thing -- no one on the ice or in the stands on this night cared one bit.

"Well, like you said, Canada loves their hockey, and from what I heard out there, we have quite a few fans who love their hockey down there too, and they're going to have a lot of fun with it and that's all that matters," Scott Niedermayer said.

Throughout the season, Carlyle had imposed the 10-minute rule. The Ducks had 10 minutes to celebrate a win, 10 minutes to mourn a loss.

This one? This is for a lifetime. And not just for the players.

Scott Burnside is the NHL writer for ESPN.com